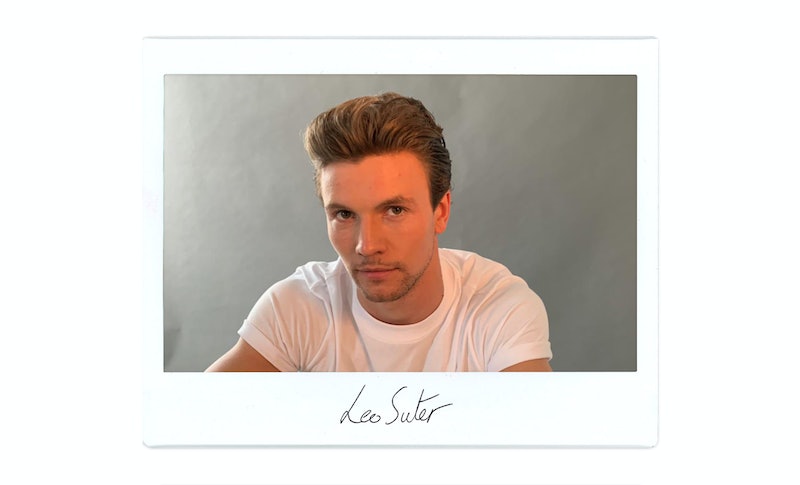 When celebrities hang out with Bustle editors, we want to give them the chance to leave their mark. Literally. So we hand them a pen, a piece of paper, a few questions, and ask them to get creative. The rest is up to them. This time, Beecham House actor Leo Suter is leaving his mark in the Bustle Booth.

If there's one word to describe Leo Suter's career so far it would have to be "varied." From starring opposite the sensational Jenna Coleman in ITV's Victoria, to playing the brooding lead in the BBC Three university thriller Clique, it seems he can take on any role that comes his way. This summer he's back on our screens in another big period drama set in an incredibly exciting location; ITV's Beecham House.

Written by TV legend Gurinder Chadha OBE, the ITV series is set in Delhi on the cusp on the nineteenth century and follows the extraordinary lives of the people who live and work in the area. “I play Daniel Beecham," Suter tells Bustle. "He's a soldier in the East India company but he's been pulled out of front line service as he recovers from a wound. His elder brother, John Beecham, drags him away from the brothels where he is 'recuperating' to join him at Beecham House. Once at his big brother's new mansion, Daniel quickly sets about making a nuisance of himself and takes a particular fancy in one of the staff." Well, I’m gripped already.

Aside from the brilliant writing and sublime cast, one of the most sensational things about Beecham House is the setting. Speaking about his shooting in India, Suter called the experience “breathtaking and a real privilege." He continued:

"We filmed in and around Jaipur, in Rajasthan. We got to film in some of the city's most famous tourist attractions including the City Palace and the Amer Fort. Not only are these places visually stunning, they also date back to when our show is set (1795), and beyond. As an actor that really helps bring the scripts to life. We also had some brilliant days horse riding out in the deserts of Rajasthan. Some of the sunsets and sunrises there will live with me forever.”

Suter's experience in Victoria means that it isn't his first time in a period drama, but which does he prefer: theatrical ruffles of Sunday night TV or the university digs of Clique? “I like variety to be honest,” he explains. “It's definitely nice to mix things up. There are certain things that you get to do in period dramas that you don't get to do in contemporary pieces and vice versa. For Beecham House I was galloping through the Indian dessert while for Clique I was dancing to Tiësto in Edinburgh night clubs. I love my job.”

Not only has Suter had some amazing roles on screen, he's starred in some pretty major film and stage productions, too. After graduating from Oxford University, Suter took on the role of Mercutio in a production of Romeo and Juliet that toured Japan. In addition to his TV work, Suter will hit the big screen in July 2019 playing Robert Pulaski opposite the very talented Adelaide Clemens in I’ll Find You.

As an actor with so many varied roles under his belt it isn’t surprising that the people who inspire him have played more than a few different characters in their time, too. “I think Olivia Coleman is fantastic," he says of his acting icons. "I love the body of work that she has behind her and I think her Oscar was thoroughly deserved. There's also Stellan Skarsgård who I did my first film with and he was a stellar actor and role model.”

While A List actors might inspire him today, Suter’s desire to become an actor began much closer to home. “I had some brilliant teachers at school who really encouraged me to get involved in drama," he tells Bustle. “I used to love doing school plays. I acted through university too and that really cemented the idea that I wanted to pursue this crazy career.”

If you want to learn a little bit more about Suter, here is how he answered his Bustle Booth questionnaire.