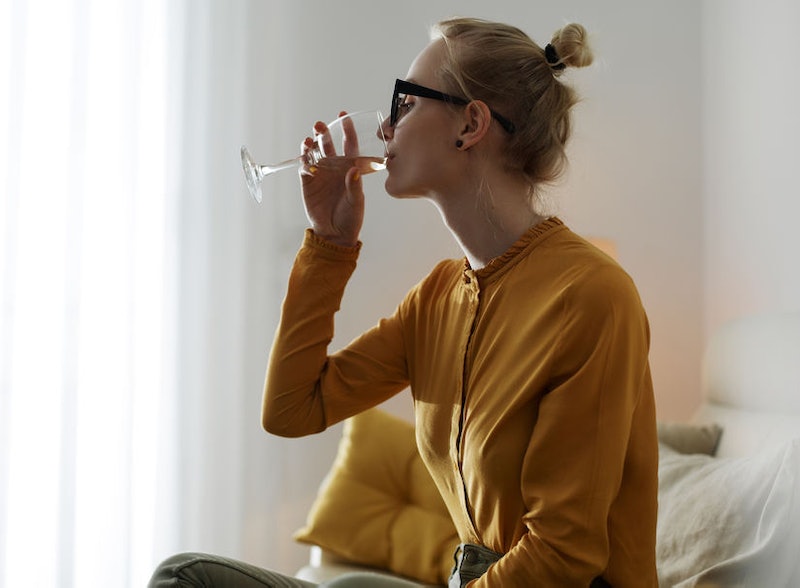 Find your nearest scientist and bestow upon them a hearty high-five, because a new study has suggested that consuming beer, wine, and chocolate might increase your life expectancy (which you might want to explain to your baffled dentist, who you've just earnestly high-fived). Or rather, as Metro reports, an anti-inflammatory diet might do so, but that diet can contain the aforementioned beer, wine, and chocolate. So admittedly, chocolate alone isn't the answer to a centenary letter from the Queen — but it might well help.

The study's conclusion? "Adherence to a diet with high anti‐inflammatory potential may reduce all‐cause, CVD and cancer mortality and prolong survival time especially amongst smokers." Interesting!

So what counts as an anti-inflammatory diet? Study author Professor Joanna Kaluza, of the Warsaw University of Life Sciences, said, "It is known that fruits, vegetables, tea, coffee, red wine, beer, and chocolate are rich in antioxidants," according to Metro. See that? Red wine, beer, and chocolate. Would I lie to you, beloved readers? (Kaluza did point out, Metro says, that the inclusion of wine and beer could be contested "based on ongoing debates regarding the relationship between alcohol intake and mortality.")

Other foods to gravitate towards, according to Kaluza? "Wholegrain bread, breakfast cereal, vegetables and fresh as well as dried fruits are rich in dietary fibre; and olive and canola oils are rich sources of monounsaturated and polyunsaturated fatty acids, which are of potential health benefit because of their anti-inflammatory properties."

So what exactly is inflammation, and why is it so problematic? Harvard Health Publishing explains it thus: "Your immune system becomes activated when your body recognizes anything that is foreign — such as an invading microbe, plant pollen, or chemical. This often triggers a process called inflammation."

The same inflammatory response can occur, however, without a dangerous organism to defend against. Chronic inflammation can lead to multiple major diseases — Harvard Health lists "cancer, heart disease, diabetes, arthritis, depression, and Alzheimer's," while Scientific American adds colitis and bursitis. And food can contribute to the issue. To minimise inflammation, Harvard recommends avoiding foods like white bread, chips and other fried foods, red and processed meat, fizzy drinks, and margarine.

In conclusion? Eat that chocolate if you want to combat inflammation. Or eat it even if you don't, because it's your damn body and you can feed it what you want.