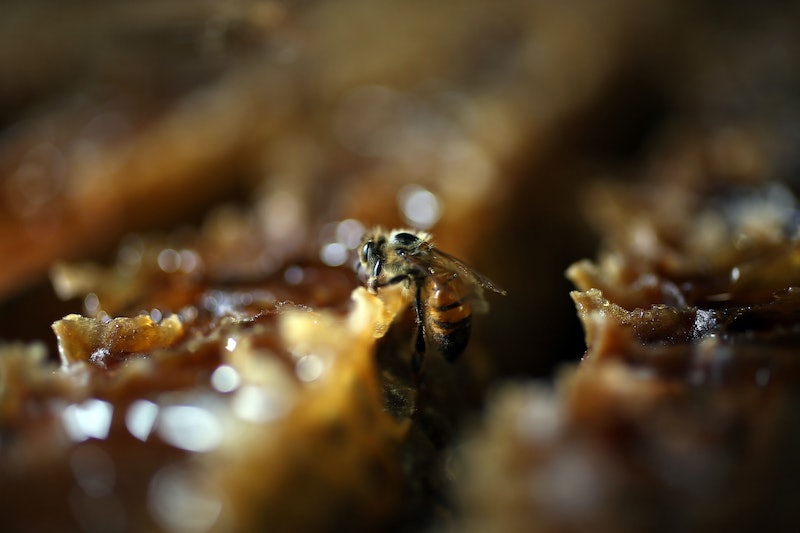 In a stranger-than-fiction story, a woman in Taiwan had four live bees removed from her eye. The New York Times reported that the bees living in the woman's eye fed off of her tears. I'll give you a moment to let that sink in. Bees. Living in her eye. Drinking her tears. While it sounds like a case from Grey's Anatomy, it's 100% true. If you're experiencing some strong feelings right now, there's actually a reason these kinds of compelling stories evoke empathy and other complex feelings.

"For some highly attuned and emotionally reactive individuals, these emotional responses are felt 'as if' they are experiencing the trauma first hand. Pain empathy is a specific subgroup of empathy that involves recognizing, understanding and experiencing another person's pain, which is likely what many are feeling in this case," Dr. Nancy Beckerman, a professor at Yeshiva University’s Wurzweiler School of Social Work, tells Bustle over email.

In this particular story, the woman was participating in the annual Chinese Qing Ming tomb-sweeping festival, a time set aside to tend to the grave sites of loved ones, when wind blew what she thought was dirt into her eye, BBC News reported. She said she felt a sharp pain in her eye and experienced extreme swelling, for which she sought medical attention. "It was a very intense stinging pain, and I was constantly shedding tears," the woman said in a news conference translated by Reuters.

The bees that had taken up residence in her eye were identified as sweat bees, and they get their name from something kind of creepy. Sweat bees are attracted by human sweat," the website Gardening Know How explained. Dr. Hung Chi-ting, an ophthalmologist at Fooyin University Hospital in Taiwan, said at the news conference that this is the first known case in the world of sweat bees being removed from under a human eyelid.

While the story evokes an emotional reaction, research indicates that your fixation on it is more than just a feeling — it has effects on a biological level, too. In a 2015 research paper Why Inspiring Stories Make Us React: The Neuroscience of Narrative, published in the journal Cerebrum, Paul J. Zak, Ph.D. explored why inspiring stories make us react. Per Dr. Zak's findings, it likely has something to do with oxytocin being released into your brain when you relate to the plight of another. "[We] found that the change in oxytocin was associated with concern for the characters in the story. If you pay attention to the story and become emotionally engaged with the story’s characters, then it is as if you have been transported into the story’s world."

When you read a story about a with the shock factor of a woman having bees in her eye, you want to know how it's going to end. And you'll likely be relieved when you find out that the woman made a full recovery. If the story had turned out differently, and she needed support to pay for an expensive eye surgery, a story like this might motivate you to do something, like donate money, Dr. Zak explained: "Narratives that cause us to pay attention and also involve us emotionally are the stories that move us to action."

Essentially, reading stories like this triggers empathy — you feel for the character in the narrative, on a level where you can imagine this happening to you. That's why you read stories like this, and why you likely remember them long after you finish reading.