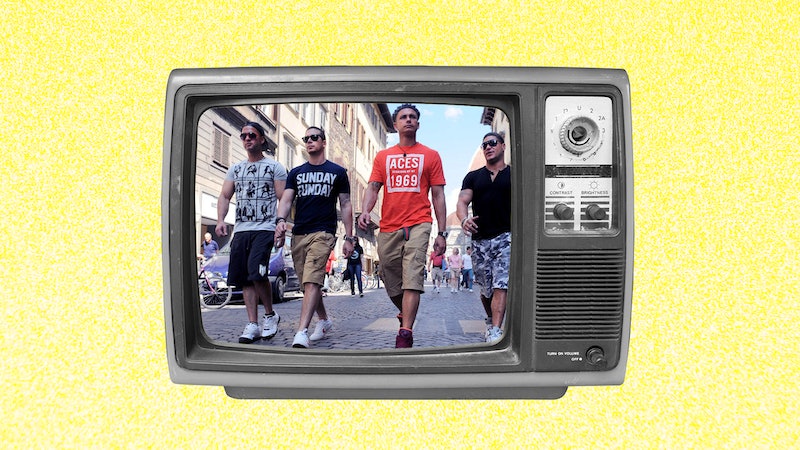 MTV's Jersey Shore became a phenomenon for its depiction of hard-partying Italian-Americans causing trouble in the beach town of Seaside Heights, New Jersey. But what happens when you take the Jersey out of Jersey Shore? As part of Bustle's Behind Reality series, we spoke to Jersey Shore creator SallyAnn Salsano about the show's Season 4 stint in Italy, which almost ended in disaster.

When MTV announced that Jersey Shore was going to Italy for its fourth season in 2011, expectations for the record-breaking reality TV phenomenon were high. "The cast is headed to the birthplace of the culture they love and live by," Chris Linn, then Executive Vice President of Programming and Head of Production for MTV, said in a press release. "We can't wait to see what erupts as a result."

Those eruptions were similar to those seen in previous seasons — there were fights, hookups, and an arrest, to name a few — but this time they came with the added challenge of partying, fighting, and GTL-ing in a foreign country. And they almost didn't happen at all. As Jersey Shore creator and executive producer SallyAnn Salsano tells Bustle, actually filming Jersey Shore in Italy for 60 days was anything but easy.

That doesn't even take into account the extensive work that happens before the cast even begins filming, or the fact that production went directly from filming Season 4 to Season 5. "We all worked and lived together for 121 days straight," Salsano says. "It was freakin' bonkers." Eight years and a handful of spinoffs later, Salsano broke down what exactly went into bringing Jersey Shore to Italy, and everything that viewers didn't see.

Their House Wasn't Actually A House At All

Deciding what Italian city to film in was a feat in itself. Salsano explains that after location scouting in Milan, Rome, and Florence, producers had to "go before every major city, every mayor, every everything," to get permission to film. Once they settled on Florence — partly due to its large population of college students and it being a very walkable city — they had to find a place for the cast to live, and that led to what Salsano considers "the most insane thing I probably have done to date."

Though you would never have known it from watching the season, the Jersey Shore house in Italy was not actually a house. Or an apartment. Or any other building meant for residents to live in. "We couldn’t find a place that could house us that was in the city, that had outdoor space, that had anything," Salsano says. Finally, on one of their last days in Florence, they found the location they would end up shooting in. The catch? "That location was actually a bank."

There weren't any showers, or even a kitchen; Salsano's crew had to build pretty much anything they would need to transform the location from a bank building into a home. "Some walls that were layout walls — like the one Mike rammed his head into — were concrete walls that obviously we couldn’t move, but the truth of the matter is, we had to take that entire place and lay it out."

In less than 30 days, MTV's art department and local Italian contractors transformed a bank into the "home" we saw on Jersey Shore. Doing so required a little bit of film trickery.

Remember the patio the cast spent a lot of time of hanging out on? The one very reminiscent of their deck at the original shore house? That wasn’t even on the ground. “That was all scaffolding, none of that was there,” Salsano recalls. “We actually built scaffolding in the inside of the building to make it seem like there was a courtyard up there. There was nothing up there.”

In fact, there wasn't even a door to access it. "If you go back and you watch them actually walking down the hallway and how they got outside, that was not a door they were going to, it was a f*cking window," she says. "In the hallway there was a window and we built stairs going up to the window like it was normal. So if you actually look at it now, you’d be like, 'Oh my god, that was such a window.'"

Security Was A Bigger Issue Than Even The Crew Anticipated

Of course, the challenges of producing Jersey Shore in Italy didn't end with the completion of the pseudo-apartment. Once the cast arrived in Italy, the producers quickly realized that even though the first season of Jersey Shore had only just started airing in the country, the show was much more popular there than they had realized, likely due to the large population of American students in Florence.

"When we got there, we were like, 'Oh, this is gonna be good, no one really knows us yet, it's gonna be awesome,'" Salsano says. "And then by the time we had gotten there, [there were] barricades in the streets and everyone knew we were coming."

"Those guys were like rock stars. We couldn’t even go down the streets."

The frenzy surrounding the cast, combined with the inherent language barriers of filming in Italy, meant that just off-screen production was constantly surrounded by an unprecedented amount of security. Not only did every cast member have his or her own security guard, but they each had an Italian security guard, too. Add in translators, and the production was so large that at times it became impossible to film.

"Within being in the country for 48 hours, I think we tripled our security footprint," Salsano says. "It was pretty insane, those guys were like rock stars. We couldn’t even go down the streets." At one point, she recalls, the streets got so mobbed that the entire production had to duck into a store and lock the door to escape the crowds.

They Really Did Almost Get Kicked Out Of The Country...

Even with so many security precautions and people surrounding them, the cast still got into some trouble, which was far from ideal considering the Italian government's scrutiny meant the threat of getting kicked out of the country was a very real one. Of course, after spending the previous three seasons getting familiar with the cast's antics, Salsano knew this was something to be prepared for.

"Florence was one of the few places that actually accepted us coming, and we had a laundry list of things we had to adhere by in order to be there," she says. "We couldn't get into any legal trouble, we couldn’t do this, we couldn’t do that... I remember being on the phone with MTV and being like, 'Guys, just so you know, we're gonna do the best we can, but the thing about Jersey Shore is, it's real.'"

The beauty of the cast and the show, she emphasizes, is that you never know what they'll do. "We're not going to a restaurant and lighting it an hour and a half before we get there, and they're sitting at a pre-lit table, and we're telling them what to say. This is like, they walk out the door and we're figuring out where the f*ck they're going."

"I remember calling MTV and being like, ‘OK, I don’t want to be crazy, but I feel like we should get the shore house ready to go.'"

As fans surely remember, there were two notable incidents that occurred in Florence: Mike "The Situation" Sorrentino running head-first into a wall, and Nicole "Snooki" Polizzi getting into a minor car accident. Though in any other situation, neither of these would have been major problems, Salsano knew they were already on thin ice with the Italian government.

"After Mike ran his head into the wall, I remember calling MTV and being like, ‘OK, I don’t want to be crazy, but I feel like we should get the shore house ready to go. If something happens here, and we literally get thrown out of the country, we have to be ready to just go back to Jersey.’"

Then Snooki got into a car accident mere days later. "I was like, ‘Oh my god, we are all gonna be thrown out of this country. This is insane,'" Salsano says. Thankfully, the accident ended up being only a minor fender-bender. However, Snooki soon realized that she had left her license in her jeans from the night before, which complicated things, and she ended up being held at the police station.

"I just remember being in the front of the jail and being on the phone with MTV, and being like, 'OK this literally might be it, but we really didn’t do anything,'" Salsano adds. Luckily it wasn't, and production was able finish filming Jersey Shore Season 4 in Italy. They then returned to New Jersey for Season 5.

...But They'd Still Do It All Over Again

Despite all of the risks and security concerns, if Salsano had it her way, she'd take the cast just about anywhere for another destination season. "Everywhere I’ve been with them has been crazy," says the EP, who also produces Jersey Shore: Family Vacation. "We talk about going everywhere. Literally we sit down all the time, we’re like, ‘We wanna go here, we wanna go here,'" she adds, noting that Mexico, Thailand, and Greece are all on their hypothetical list.

"I always say, every year from now until we’re all 60, let’s go every year somewhere different." As much work as it would take to make that a reality, given the incredible success of Jersey Shore: Family Vacation so far, it'd surely be worth it. MTV just needs to get that enormous security detail ready, because wherever the cast goes, people seem to follow.

More like this
Clayton & Susie Broke Up, Citing "A Significant Amount Of Pain" After 'The Bachelor'
By Jordyn Tilchen
What Is 'Pretty Wild' Star Tess Taylor Up To Now?
By Morgan Leigh Davies
Here's The Full List Of Zach's Confirmed & Potential 'Bachelor' Contestants
By Kadin Burnett and Grace Wehniainen
How To Stream 'Pretty Wild'
By Arya Roshanian
Get Even More From Bustle — Sign Up For The Newsletter