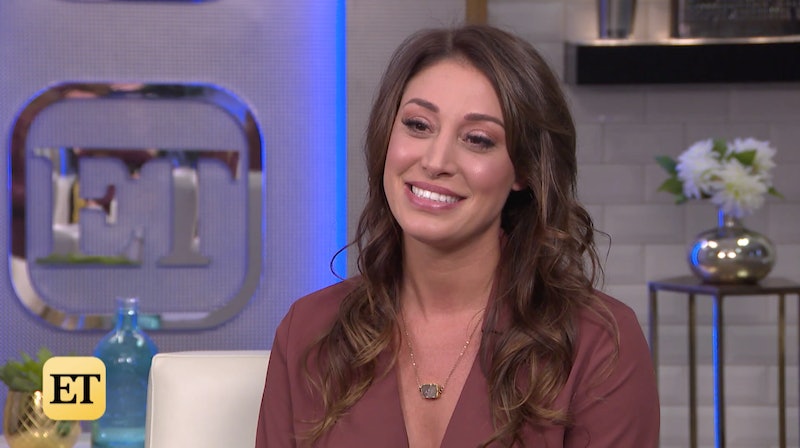 Pete Weber isn't the first pilot to nab the lead role on The Bachelor. During Season 14, Jake Pavelka had that honor and he ended up picking Vienna Girardi, who got the "villain" label that season. Almost ten years later, Vienna reflected on being a Bachelor villain in an Oct. 23 interview with Entertainment Tonight. In the interview with ET, Vienna recalled how going on the Bachelor at age 22 gave her "very tough skin and a backbone." She also said, "It made me strong, really strong,"

Unlike today's Bachelor couples, Vienna and Jake didn't announce their split via joint statement or in an Instagram post. Instead, Vienna and Jake sat down on a wicker bench for an interview with Bachelor host Chris Harrison. Reflecting on that interview, Vienna told ET, "People really got to see who I was, not just how I was portrayed."

During their sit down, Vienna infamously referred to Jake as a "fame wh*re." In turn, Jake accused Vienna of "undermining him" and "interrupting" him. Even though the special was pre-taped, it was very raw. Chris even referred to it as "contentious" and "very heated" in a 2010 interview with TV Guide.

As brutal as that joint interview was, Vienna said it actually was a good thing, because she got to show her side of the story. She told the publication, "The last eight years have really not been that difficult; people have given a chance to get to know me... and people who know me know I'm not a villain."

Even though she isn't a "villain" in real life, she did get that label on the show because it has happened to someone pretty much every single season. Demi Burnett was the "villain" on The Bachelor 23, even though she had lots of fans and plenty of opportunities for future appearances in the franchise. Demi appeared on Hannah Brown's Bachelorette season twice and she got engaged on the Bachelor in Paradise Season 6 finale. Nowadays, being a "villain" seems to be a leg up on the other contestants. Still, other other contestants have been very vocal about their struggles with the "villain" label, including Krystal Nielson, Olivia Caridi, and Courtney Robertson.

When she was asked about advice she would give to future contestants, Vienna said, "If you're young, I would say wait and probably watch the show first before you go on it. Study a little bit. I should have done that too."

Vienna cannot change the past, but she seems to have been able to make the best of her life post-reality TV.