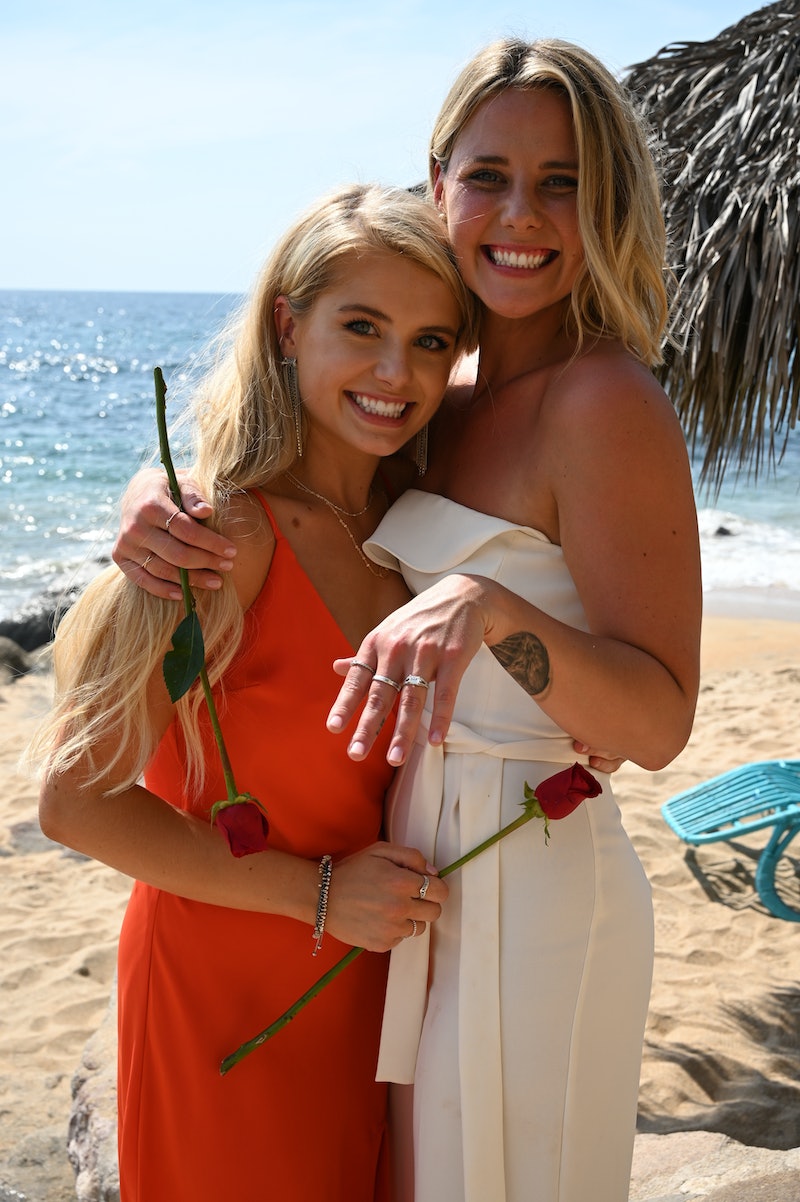 Bachelor in Paradise cast members Demi Burnett and Kristian Haggerty got engaged (twice) during the Season 6 finale. The episode aired on Sept. 17, but the couple is already fielding questions about wedding planning. Demi said she would get married on Bachelor in Paradise if one specific condition is met. Demi told Lauren Zima from Entertainment Tonight, "If it's free, sure," then teased, "We'll see."

It could likely be free, but that hasn't been officially confirmed by the Bachelor alums or the network. When Carly Waddell and Evan Bass got married in 2017, ABC declined to comment to Bustle on whether the network paid for the ceremony. The network also didn't did respond to Bustle's requests for comment about who paid for Jade and Tanner Tolbert's 2016 wedding either.

The first Bachelorette couple Trista and Ryan Sutter earned $1 million for their televised wedding back in 2013, which was confirmed by E! News. The media outlet also reported that Bachelor stars Sean and Catherine Lowe reportedly earned six figures for their wedding special in 2013. Even if the wedding isn't "free," it seems to be possible to make money from a TV wedding.

Kristian and Demi's wedding doesn't seem to be happening soon, though. During the Entertainment Tonight interview, Zima asked Kristian and Demi, "Have you guys talked about it? Do you have a timeline for a wedding at all?" Without hesitation, Demi answered, "Oh gosh no. We just got engaged." Kristian added, "We are just enjoying it."

In that same ET interview, Demi said, "Bachelor World moves fast, but then the engagement, that's whenever people actually, like, take the time to be slow about it." For now, she said they want to "be normal for a bit and date and have fun, and then the wedding will come."

The couple did attend Krystal Nielson and Chris Randone's wedding this summer, which was televised on Bachelor in Paradise. Demi said to Entertainment Tonight about the wedding, "It was beautiful. It was such a beautiful moment. We'll see."

Even though Demi and Kristian don't have anything planned at the moment, but it wouldn't be shocking if they got married on the show. Most of the couples that got engaged on Bachelor in Paradise has gone on to get married on television. Season 1 couple Lacey Faddoul and Marcus Grodd had a beach wedding in 2015 during the Season 2 premiere. A year later in 2016, E! reported that they split and revealed that they were not legally married. Season 2 favorites Jade and Tanner tied the knot during a televised wedding special in 2016. Then, Carly and Evan got married on Bachelor in Paradise in 2017 a year after meeting on the show's third season.

Season 5 duo Chris and Krystal kept the tradition going with their nuptials being televised on this season on Bachelor in Paradise.

Ashley Iaconetti and Jared Haibon also got engaged during BIP Season 5, but they were not cast members that season. They actually met during Season 2 and were involved in a Season 3 love triangle with Caila Quinn before they worked things out in real life. Jared and Ashley did not get married on TV and they had a wedding in Rhode Island on Aug. 9, 2019.

Based on past history, it would actually pretty unusual if Demi and Kristian did not get married on TV next year.