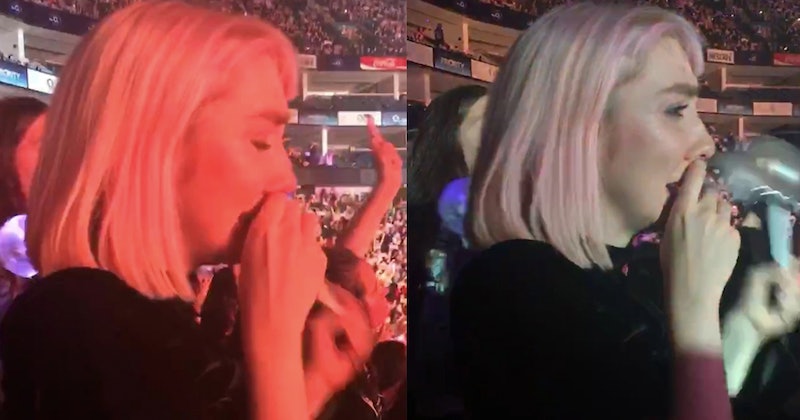 I’ve have always been a hungry fangirl. Stanning FIVE when I was five, growing up alongside McFly, and experiencing the consistent emotional trauma that was falling in love with One Direction. No matter how many albums and tours there were, I always wanted more. Recently I welcomed Korean boyband BTS into my life and honestly, I’ve never felt so full. It’s hard to explain to people outside the fandom, this borderline obsession over seven boys who before now, have never set foot in the country I live in. It’s real though, and I’m not alone.

Around the world, there are millions of fans who feel passionate about their love for BTS, despite never having had any kind of contact with the band. In the last 12 months they've produced three albums — Love Yourself: Her, Tear, and Answer — a full documentary series in Burn The Stage, and a whole load of alternate universe theories (yes, really). In September 2018 they topped the Billboard 200 album charts for the second time, and in August they smashed Taylor Swift's record for the biggest 24-hour music video debut on YouTube. Put simply: they're absolutely killing it.

But being initiated into the culture of K-pop (specifically BTS and its fandom, Army) has been a seesaw experience. On one hand it's diversified my otherwise western pop culture consumption, on the other, there are parts of the industry I’ve found challenging to deal with.

Starting with the good parts, the amount of time Idols spend as trainees means they’re generally older than western pop stars by the time they debut. As an ageing boyband fan, this is a draw. Along with the obvious "having pictures of them on my desk" thing, their songs feel infinitely more relevant to me. Their music is great, the visuals are stunning, and the production quality is top notch.

Now the downsides. I don’t know all the ins and outs of the K-Pop industry, but I do know that being an idol is demanding. There’s no point in dancing around this point of tension within the fandom, and there's no right or wrong opinion. BTS work around the clock to bring us this content, which can sometimes make fans worry for their health. I do find myself willing them to rest and wondering if they’re eating enough or staying hydrated.

However, I try to be mindful that in South Korea the approach to working culture is perhaps entirely different to my own. Also that BTS are healthy men in their 20s, existing within a sometimes problematic industry, but with the capacity to make their own choices. It does feel weird, but I’ve made the decision as a fan to try and resist the urge to mother them, and instead support their personal choices and their music.

For me, that support was about seeing them live, and that journey was... fraught. Ticket sale was a disaster. I took annual leave, and me and my sister Karrie tried for London, Amsterdam, Paris, and Berlin with hopes of getting at least one date. There was a point where we had two Amsterdam tickets in our basket, when Ticketmaster froze and our session timed out. It was bad. We cried. A lot.

By some kind of miracle, I managed to get a last minute ticket for London. Karrie didn’t and it felt wrong going without her. I know Karrie’s situation is common. Armys all over Europe were left devastated 10 minutes after release time, and that feeling sucks.

By the time it came to see them at London's O2 arena, I’d seen countless fancams of live performances, almost every interview uploaded to YouTube and a million compilation videos along the lines of Jhope SUNSHINE Technology || Try Not To Laugh/Fangirl/Fanboy. I thought I was ready. I was wrong.

The lights went down and I was inconsolable. I’m not sure anything could’ve really prepared me for the intensity of the two and a half hours that followed. It was everything I’d imagined, only presented in roaring technicolour. I was genuinely worried that the whole show would slip through my fingers and that through the emotion I wouldn’t remember anything. Admittedly, some parts are a bit of a blur (mainly because I was viewing it all through tears) but what I’ll never forget is that feeling of pure searing joy, and the genuine connection I felt with the band.

At the end I was physically and emotionally exhausted, and my right arm grew two sizes from swinging about my light stick. It is three days later and I still have cramp in both my calves and well up whenever "Magic Shop" comes on shuffle. I really don’t know how these guys keep up with their hectic schedules, but I sense they are true professionals who thrive on performing and being close to their fans.

I wish I could say I was satisfied, but I'm not. I want more. If we’re ever lucky enough to have BTS return to the UK, I’ll be more than ready.