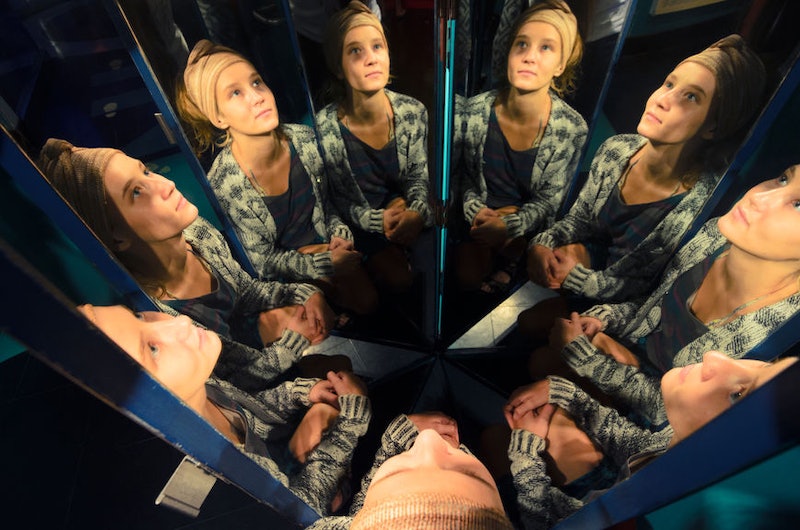 Narcissists might be self-important attention seekers, but annoyingly, it turns out they are more likely to be successful. According to new research, narcissists may well have the personality traits that make you more likely to succeed, and are often destined to do well in all areas of their lives, including in education, work, and romance. So what exactly are the benefits of being a narcissist?

Researchers at Queen's University Belfast have found that narcissists possess what the researchers have dubbed "mental toughness" — which gives them the ability to succeed. In the study Mental Toughness: A Personality Trait That Is Relevant Across Achievement And Mental Health Outcomes, Dr. Kostas Papageorgiou, a lecturer at the school of psychology, found that adolescents who display some of the traits associated with narcissism, may also be more mentally tough, and because of this, perform better at school.

"Narcissism is considered as a socially malevolent trait," Dr. Papageorgiou explained. "And it is part of the 'Dark Triad' of personality traits — narcissism, psychopathy and Machiavellianism."

As part of the study, 340 adolescent students were recruited from three different Italian high schools in the Milan Province. Researchers then looked into the association between mental toughness, narcissism, and achievement — finding mental toughness correlated with narcissism.

“If you are a narcissist," Dr. Papageorgiou continued, "you believe strongly that you are better than anyone else and that you deserve reward. Being confident in your own abilities is one of the key signs of grandiose narcissism and is also at the core of mental toughness. If a person is mentally tough, they are likely to embrace challenges and see these as an opportunity for personal growth."

Could this research suggest that we might consider narcissism as a potentially beneficial personality type? Dr. Papageorgiou seems to think so. "People who score high on subclinical narcissism may be at an advantage," he said, "because their heightened sense of self-worth may mean they are more motivated, assertive, and successful in certain contexts."

However, according to Psychology Today, the "Dark Triad" Papageorgiou references, underpins much of the behaviour and traits found in those exhibiting narcissism, and the impact of that is perhaps greater for those around narcissists, than to the individual exhibiting the tendencies. "The Dark Triad underlies a host of undesirable behaviours," psychologist Susan Krauss Whitbourne said when writing for the publication, "including aggressiveness, sexual opportunism, and impulsivity." And, according to Whitbourne, not only can it be difficult knowing people who exhibit these traits, it can be actively damaging for your mental health.

Narcissism is also considered to be a personality disorder, which according the the Mayo Clinic is a "mental condition in which people have an inflated sense of their own importance, a deep need for excessive attention and admiration, troubled relationships, and a lack of empathy for others." However, beneath the surface, narcissists are potentially more vulnerable than they like to let on. "Behind this mask of extreme confidence," the Mayo Clinic states, "lies a fragile self-esteem that's vulnerable to the slightest criticism."

And while narcissists may have mental toughness, those with narcissistic personality disorder might not always be happy with their lot in life.

"People with narcissistic personality disorder may be generally unhappy and disappointed when they're not given the special favours or admiration they believe they deserve," the Mayo Clinic says. "They may find their relationships unfulfilling, and others may not enjoy being around them."

This new research could well change how we contextualise narcissism. "It is important that we reconsider how we, as a society, view narcissism," Dr. Papageorgiou continues. "We perceive emotions or personality traits as being either bad or good but psychological traits are the products of evolution; they are neither bad nor good — they are adaptive or maladaptive. Perhaps we should expand conventional social morality to include and celebrate all expressions of human nature."