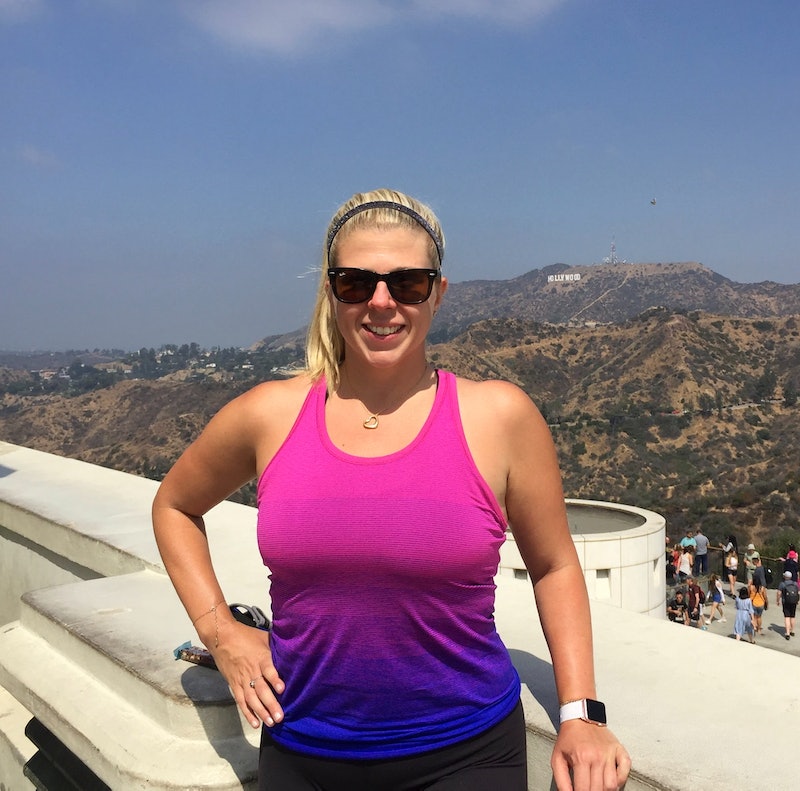 Four years ago, I was diagnosed with generalized anxiety disorder. Following a long, harrowing job search after losing an even more soul-crushing job, I had finally landed my dream position. Yet, any time I saw co-workers having a conversation I wasn’t involved in, I was convinced it was about how they didn't like my work, and I would lose my job again. I knew it was time to head back to therapy to address these irrational thoughts before they got out of hand, and I scored off the charts for GAD.

Like many others who receive unexpected mental health diagnoses, I wondered: am I “weak” — though, as I've learned, there's nothing "weak" about needing support for mental illness — or is it just my genetic lottery? But as someone who’s adopted, I didn’t know "where" my mental health condition came from — or what may surface later in life.

My real parents, the ones who raised me, both dealt with situational depression in a tough spot in life, but not chronic depression or anxiety. During my first anxiety attack, they both came to be with me and support me. Yet, as the anxiety (and its friend, depression) stuck around, they couldn’t understand why I was still having panic attacks despite my life being “so good.” They wondered why the therapy “wasn’t working.” When I told my mom I was starting an anti-depressant several years ago, she emailed me, “Maybe just having fun with your friends and talking it out could help.”

If you’re not adopted, you probably haven’t given much thought to what your genetics might hold in terms of your mental health, and the relationship between nurture and nature. After a lifetime with your parents, you have a good sense of what the genetic lottery may or may not hold for you. Most mood disorders present by your early-to-mid 20s, according to the Journal of the American Medical Association Psychiatry, so if your parent had one, you’d probably know by now, since many common psychiatric conditions are considered genetic.

“Research does show that adoptees have a notably higher risk of presenting with mental health disorders," Elizabeth Studwell, PsyD and adoption therapist at Rennicke Associates, tells Bustle. "One of the reasons is the early loss and separation from the birth mother and the subsequent shifts that have to take place in the infant brain as a means of coping with this major life change.” She adds that mothers who place children for adoption also show genetically higher risks of mental health disorders themselves — giving me a nice little double whammy, just by being born. If you’re adopted and have concerns about your mental health, every day can feel like a ticking time bomb. Is today the day I’m blindsided by an unfamiliar disorder, left to untangle the web of treatment options?

Earlier this year, I was admitted to a psychiatric unit. In the eight months prior to that hospitalization, I’d lost my (adoptive) mom to ovarian cancer, been laid off from my aforementioned dream job, had my beloved dog kicked out of my apartment building and — why not? — gone through a breakup. As I experienced the deepest, most debilitating depression I’d ever felt, I wondered if I felt that way because of all the things that had happened to me, or because this was just what was in the cards for me genetically.

I have met my birthparents, so I can (and did) email them to ask about their past, which is much more than many adoptees can do. But it’s also not the same as being able to sit down with a parent and talk to them about what their experiences were like, what their parents’ and grandparents’ and great-grandparents’ experiences were like. I found out from my birthmother that she had lived with depression as well, and that both her father and my birthfather likely lived with bipolar disorder and struggled with substance abuse. Her father ultimately died by suicide.

It was, in some ways, relieving to know that there was a genetic "reason" for my depression and anxiety. That just as one may inherit a higher likelihood of type I diabetes from their parents, so may one inherit a higher likelihood of depression. But even though I had more information, I was still scared of that ticking time bomb, despite the fact that I am in my mid-30s, well past when most mental health disorders typically set in.

Armed with this information and with results from home DNA testing kits, the playing field feels more even than it ever was. While I’m still missing that lifetime of observed behavior, I have a much better idea of what I may be vulnerable to in the future — and am able to plan accordingly. I can use this knowledge to make important health and lifestyle choices. Knowing, for example, that substance abuse runs in my genetics, has given me the kick I needed to examine my own drinking habits. I’ve been grateful to be able to provide more information than “I’m adopted” when doctors ask about family history. But most of all, in pressing to know more about my family history of mental illness, I've developed a far more intentional relationship to my mental health — more so, perhaps, than I would have had I not been adopted.