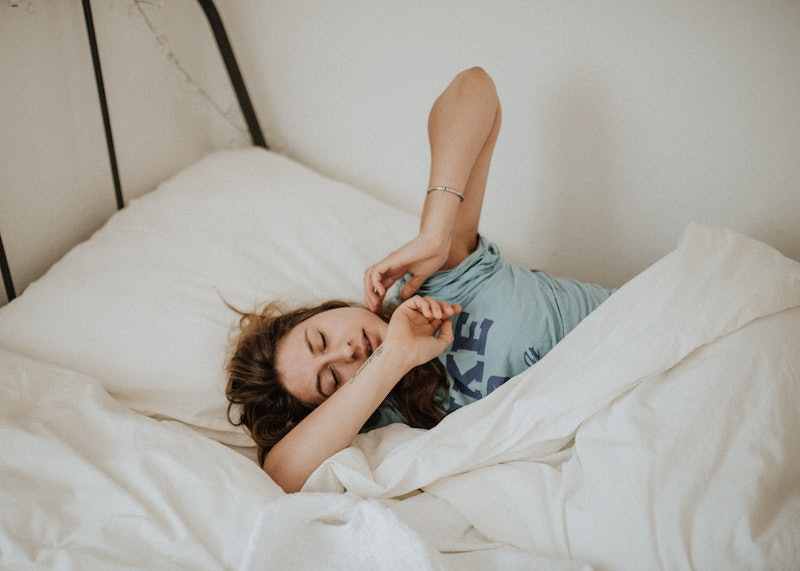 There are a number of theories explaining why we dream the way we do. Some say it's merely our brains organizing the day's activities. Others say it's our subconscious sneaking through. Still others say our dream are influenced by the last thing we were thinking about before we dozed off. Now, there's a new theory: according to one study, our dreams depend on our personalities — more specifically, whether we're introverts or extroverts.

The study was conducted by Best Mattress Brand. They had over 1000 participants take the Myers-Briggs Type Indicator personality test, and also asked how frequently the participants dream of certain subjects — like their dads, flying, being naked, and more. Other questions helped determine how lucid their dreams are, how alert they feel once they're awake, whether or not they have interest in interpreting their own dreams, and how often they have nightmares.

And when it comes to sleep quality, extroverts seem to be ahead of the game: they have more energy during the day, feel more alert, and sleep through the night better than introverts. This might also explain why they have more lucid dreams and don't have a hard time staying awake when they want to.

Mediators have nightmares the most frequently, and they're interested in interpreting their dreams.

The commander, on the other hand, has very little interest in interpreting their dreams.

If you're a logician, you dream about your crush or significant other the most.

Campaigners have lucid dreams the most frequently.

Most of all, the executive is satisfied with how energetic they feel when they're awake.

Protagonists remember their dreams the most.

The consul is most satisfied with how energetic they feel when they're awake, and they have the fewest nightmares.

Debaters remember their dreams the least. The also dream about murdering someone the most frequently. In related news, stay away from debaters.

Entertainers have a hard time staying awake, and they dream about their crushes or significant others the most.

If you're an adventurer, you dream about your friends the least.

Logisticians dream about both their dads and murdering someone less.

Do you dream often about being unable to move? You might be an advocate.

Least of all, architects dream about traveling.

Virtuosos dream about the future least of all.

Defenders dream about three specific things notably less: traveling, flying, and being back at school.

If you're an entrepreneur, you dream about being naked in public, talking to your crush, flying, and the future the most — but hopefully not all at the same time.

Some of these are fairly easy to understand. For instance, it makes sense that the entrepreneur dreams about the future a lot — they thrive on goals and the possibilities of what's to come. More curious, though, are personalities like the debater, and all their murderous dreams.

Which brings me to a final note, which is also something the researchers pointed out: no personality is better or worse than another. None should be cause for alarm, and they really shouldn't even be taken as fact. These are merely avenues that provide opportunities for further exploration.

More like this
An Expert Weighs In On The Viral Raw Carrot Salad Trend
By Alexis Morillo
I Spent 2 Years Trying TikTok’s Dating Advice
By Kailynn Johnson
Ashamed Of Your Screen Time Stats? Here's How To Change That
By Alexis Morillo
Learning To Love, Not Judge, The Lunchbox Wives Of TikTok
By Esther Zuckerman
Get Even More From Bustle — Sign Up For The Newsletter
From hair trends to relationship advice, our daily newsletter has everything you need to sound like a person who’s on TikTok, even if you aren’t.