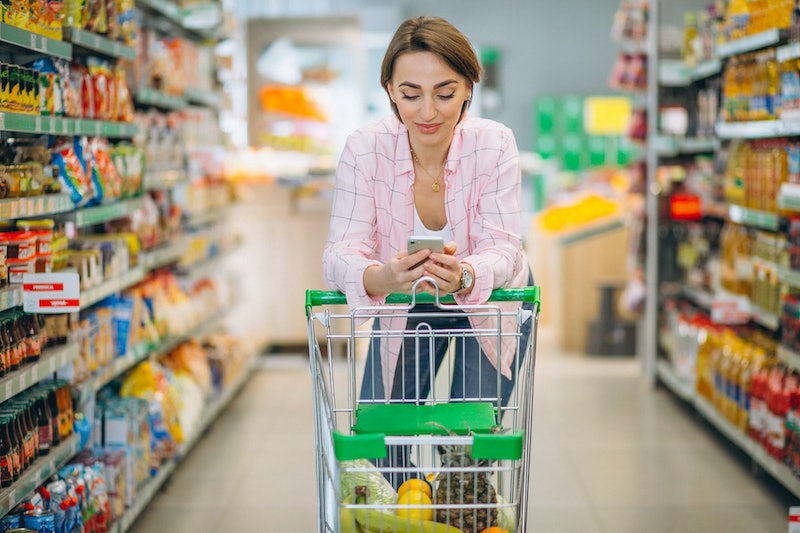 Anybody who is generally conscious of their physical and financial health live their lives by by multiple rules. Especially rules when it comes to consuming. Less of this, more of that. Perhaps avoiding certain trigger foods or locations. One of the most iconic tips of them all is in regards to how and when you do your weekly shop. I bet you have heard of it. That old "never go to the supermarket hungry" saying. But guys, the plot thickens. So recent research shows that being on your phone while in the supermarket increases your bill by 40 percent.

Oh snap. Is nothing sacred anymore?! Now experts are saying taking and sending selfies to your BFF while dancing to whatever is on the radio at the shops — will cost you?

Crap. OK, so there is a lot of actual research that was done by the University Of Bath. During their research project, respondents had some pretty fetching eyewear. Fetching eyewear that is also dead sciencey. The glasses they wore recorded their eye movements and what they were looking at. Clever, huh?

The results showed that people on their phone spent a stonking 40p extra per second when they were using it. OK, hands up anyone who could potentially be spending an absolute wedge extra without even realising? Guilty.

The project involved 117 people aged between the ages of 19 and 80. The end results found that, on average, shoppers purchased 58 percent more items and spent 41 percent longer at the shops if they were scrolling.

Dr Carl-Philip Ahlbom of University Of Bath said there is absolutely no way to deny these results:

"The findings were very clear – the more time you spend on your phone, the more money you'll part with. So if you're trying to budget, leave your phone in your pocket."

This doesn't look great for people on a budget. However, Dr Ahlbom wasn't all bad news. He pointed out that yes you might spend more, but that ain't all bad:

"It's not the phone itself that causes more purchases, but its impact on our focus. On the plus side, it isn’t necessarily a bad thing for shoppers. Taking a slower and more scenic journey can remind you of products you'd forgotten you needed, and it can introduce you to items that might make for a more inspiring menu."

I guess the results of this study will hit you in different ways owing to any number of factors. If you are in a higher financial bracket, spending a bit extra down the supermarket won't hit you too hard. It might actually expand your horizons and get you buying more interesting foods and cuisines. However, if you are a tad more on the erm, lean side of things financially, this might push you further into the red. The main concern above all, though, whatever your financial situation, is not to over buy. For the sake of your health and to avoid any of that pesky food waste. So next time you hit the supermarket, put your phone away. You know it's good for you.