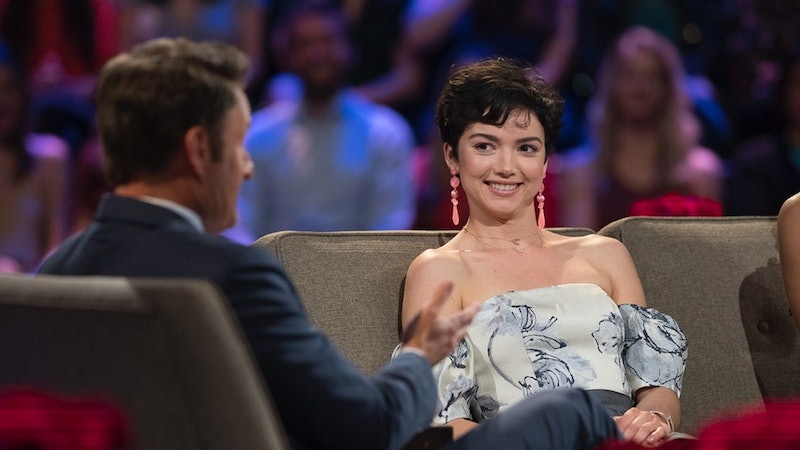 Even though Bachelor alum Bekah Martinez is no longer on reality television, she is still very open about her personal life with her fans. On Mach 6, Bekah M. shared new photos of her baby that will make Bachelor Nation instantly smile. In the two pictures, her daughter Ruth is lounging comfortable while wearing a hat along with an adorable knit outfit.

Bekah wrote in the caption, "mommy's little elf." In the first photo, the infant is looking over to her left side. And in the second picture, her cuteness is on full display as she gazes directly at the camera.

This isn't the first time the new mom shared photos of Ruth on social media, though. Bekah and her boyfriend Grayston Leonard welcomed their first child on Feb. 2, and they've been pretty open ever since they announced their baby girl's arrival. On Feb. 5, Bekah broke the news with a photo of her in a tub, mid-water birth. She told her followers,

"On the morning of February 2nd, our little girl joined us earth-side and we will never be the same. We are all as healthy and happy as can be."

At first, the Bachelor alum did not share their daughter's name with the world, but Bekah did refer to her as "baby girl" in some Instagram captions. And before she revealed her daughter's name, Bekah shared a photo breastfeeding on Feb. 7.

The very next day, Bekah put a name to a cute face when revealed that her daughter's name is Ruth Ray De La Luz Leonard. She shared a photo of the little girl napping next to some Scrabble letters that spell out the name "Ruth." In the caption, Bekah revealed that a lot of thought went into the name selection — it all came back to family. Ruth is Bekah's boyfriend's grandmother's name and De La Luz is her dad's middle name. And of course, Leonard, is Ruth's father's last name.

Speaking of family, on Feb. 10, Bekah jokingly blamed Ruth's grandmother for her outfit choice of pairing polka dots with stripes. Thankfully, Ruth is cute enough to pull off the unconventional look.

Bekah has shared more than just cute photos on Instagram. She also opened up about her new life as a mother. Bekah encouraged her followers to be "gentle" with themselves at the early stages of motherhood in a Feb. 15 Instagram post. In the caption, she shared, "Everyone’s journey (emotionally and physically) looks different. Healing and finding balance takes time."

Bekah provided support for her followers with some inspirational sentiments,

"Don’t push yourself. Your body has come a long way, and it deserves to be honored and cared for. Your mind and heart are being thrown for a loop with a crazy influx of hormones, so cry it out and laugh about it later. We’re in this together!"

Even though little Ruth is just over a month old, she already has a pretty strong following on social media since her mother is a Bachelor fan-favorite. Bekah has shared some tender moments with her daughter breastfeeding, as well as other baby photoshoots. And more importantly, Bekah's words have been very open and honest about her time as a new mom.