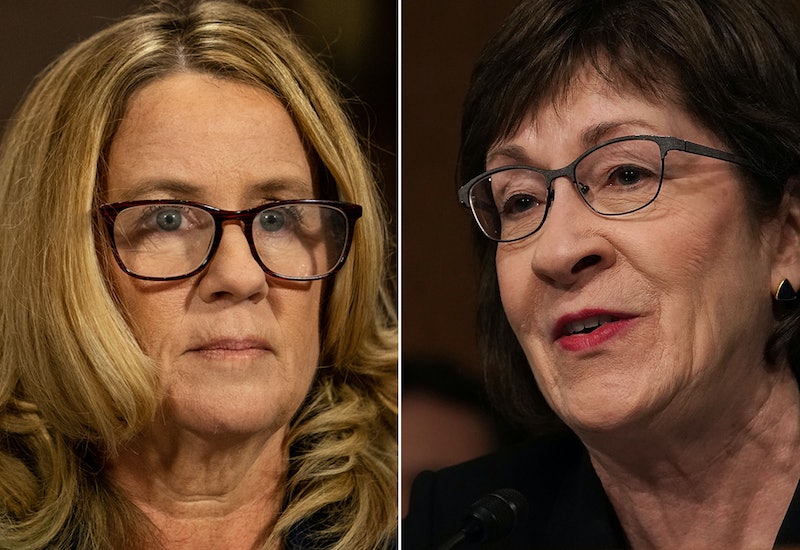 Watching senators publicly announce on Friday that they would support Brett Kavanaugh's Supreme Court confirmation, one thing felt clear: the era in which it was considered acceptable to denounce a woman who has accused an important man of sexual assault as a "liar" is over. That doesn't mean that no one is doing it anymore — a quick spin through Twitter, or Tuesday's Donald Trump rally, where the president openly mocked Christine Blasey Ford's allegations that Kavanaugh sexually assaulted her when they were both teens in 1982, make that clear. But in the wake of a year-plus of #MeToo activism and Trump-related political unrest, a new way to dismiss women's sexual assault allegations has come to the fore: proclaiming that you do believe women when they come forward with allegations — just not in a way that would require you to take their allegations seriously.

In her speech on the Senate floor announcing her "yes" vote on Kavanaugh, Sen. Susan Collins paid lip service to the #MeToo movement, declaring that it "is real. It matters. It is needed. And it is long overdue," before going on to make a statement that showed she had absorbed only the barest of the movement's messages about sexual assault.

"I believe that [Ford] is a survivor of a sexual assault and that this trauma has upended her life," Collins said. "Nevertheless, the four witnesses she named could not corroborate any of the events of that evening gathering where she says the assault occurred; none of the individuals Professor Ford says were at the party has any recollection at all of that night."

Collins' take on Ford's allegations is not significantly different from a number of others' explanations, including Kavanaugh himself, who has categorically denied the allegations and wrote in his opening statement for his Senate Judiciary hearings, "I am not questioning that Dr. Ford may have been sexually assaulted by some person in some place at some time."

The meaning of "believe women" has become distorted by those who want to be seen as sensitive to sexual assault.

But Collins, like Kavanaugh and numerous others, undercut that declaration of belief with a statement of its limits: We believe something happened to you — just not what you say. Watching various politicians and public commentators treat Ford's allegations the same way you might a child who thinks they saw a UFO — "I'm sure you saw something, sweetie, but how do you know it wasn't just a plane?" — showed that despite some very real successes, many of the #MeToo movement's messages have been lost, watered-down, or willfully misconstrued by many members of the public. That is certainly the case for the term "believe women."

Over the past several years — but especially since the 2016 election — the phrase "believe women" has become increasingly common in popular culture. A decade ago, you might have only read that motto on feminist websites; today, you can buy "believe women" t-shirts, pins, and necklaces online or at your local progressive knickknack shop, or open the New York Times to find a full-page ad purchased by the dating app Bumble bearing the phrase. This is all a huge positive breakthrough, of course; the idea that the default position should be to believe all women's sexual assault allegations was rarely part of mainstream political conversations even a few years ago.

But some of the reactions to the Kavanaugh hearings seem to show that as it has become more popular, the meaning of "believe women" has become distorted by those who want to be seen as sensitive to sexual assault, but don't actually wish to treat women's allegations as having as much weight as men's denials.

"Believe women" does not simply mean that you do not immediately call any woman who has alleged sexual assault a liar (though of course, that's the minimum required of a decent human being). "Believe women" means listen to women. It means respect women, and respect what they have to say, particularly when it comes to their own bodies, lives, and traumas. It means holding abusers responsible for their actions. "Believe women" means: act as if we already live in a world where anyone's word is considered as good as a straight white man's.

In her speech, Collins noted that she had had many women reach out to her to talk about their own experiences with sexual assault. "To them, I pledge to do all that I can to ensure that their daughters and granddaughters never share their experiences."

It's unclear which of her actions Collins thinks would contribute to this future. Instead, she and the other senators who voted for Kavanaugh have taken a step toward a future where women are told they are "believed" to have experienced an assault, but not trusted to have gotten any of the details right. Not trusted to remember the ways they were hurt, terrorized, or humiliated. Not trusted to be experts on their own suffering. And certainly not trusted enough for anyone to actually take any actions regarding their allegations, besides make a big show of concern.

It's great that feminist thinking about sexual assault has become part of the cultural conversation. But it would be a whole lot better if everyone who said "believe women" actually wanted to believe women.