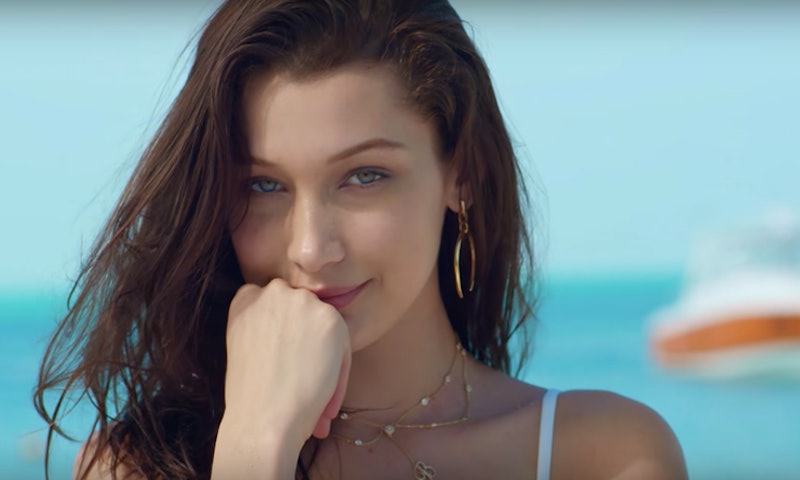 After being promoted as a luxurious event featuring "the best in food, art music and adventure," Fyre Festival got canceled on Friday and sparked a major reaction across all areas of the internet. While those behind the festival, including rapper Ja Rule, have since taken responsibility for the incident and apologized, the controversy hasn't blown over quite yet. On Saturday, Bella Hadid responded to the Fyre Festival backlash with a note on Twitter. According to E! News, Hadid didn't actually attend the festival. However, she had previously appeared in a promotional video for the event, and therefore, was criticized on social media for promoting it.

Hadid's message appears heartfelt, but also makes clear that she had nothing to do with the festival's actual production. She also admitted she "agreed to do one promotion…not knowing the disaster that was to come." In a way, it feels like a roundabout apology. Here's an excerpt:

Even though this was not my project what so ever, nor was I informed about the production or process of the festival in any shape or form, I do know that it has always been out of great intent and they truly wanted all of us to have the time of our lives.

You can read her message in full in the tweet below.

Perhaps the most important part of Hadid's statement is where she wrote, "I hope everyone is safe and back with their families and loved ones." She also adds, "I feel so sorry and badly because this is something I couldn't stand by."

The 20-year-old isn't the only one speaking up after things went downhill. On Saturday, the Fyre Festival organizers issued a statement, promising full refunds to attendees and VIP passes to the 2018 festival. They also explained their side of the story:

The team was overwhelmed. The airport was jam packed. The buses couldn’t handle the load. And the wind from rough weather took down half of the tents on the morning our guests were scheduled to arrive. This is an unacceptable guest experience and the Fyre team takes full responsibility for the issues that occurred.

It's unclear what will happen when the festival returns in 2018. But based on Hadid's statement, I'm guessing she and other supermodels may think twice before endorsing it.