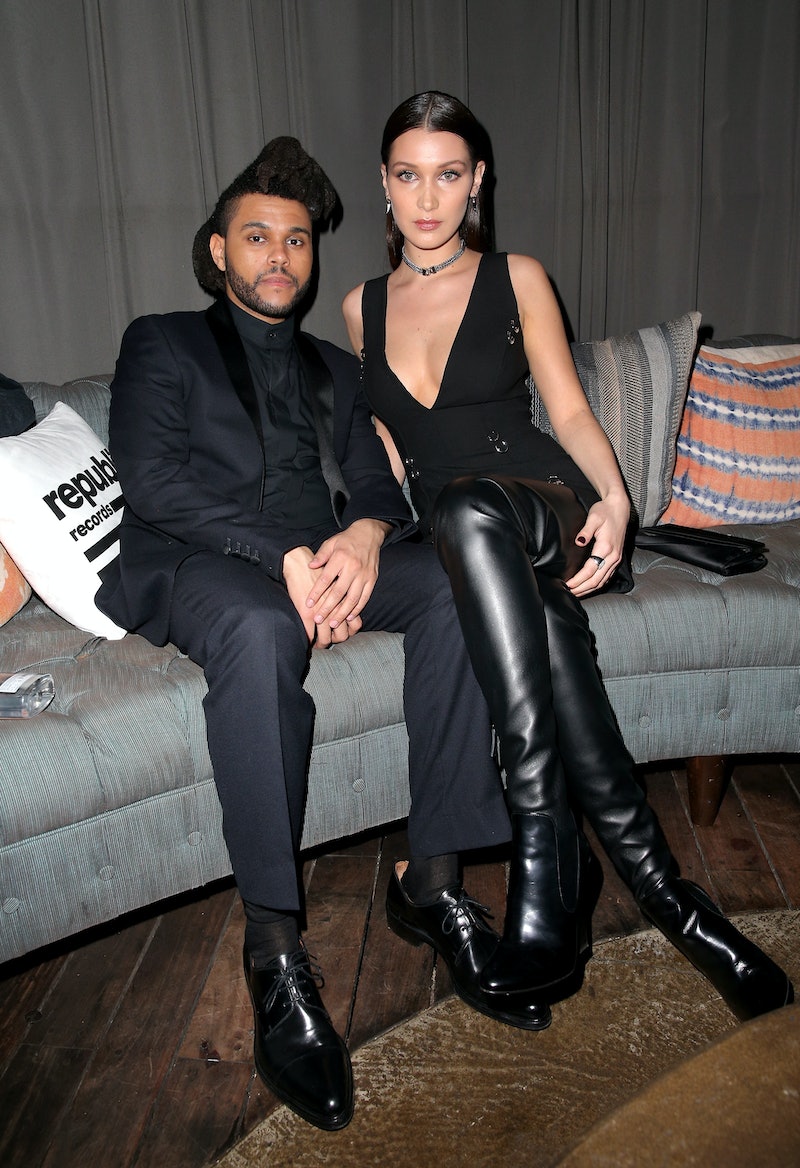 Despite recent reports of a reconciliation, it turns out Bella Hadid and The Weeknd aren't back together after all, according to People. A rep for the singer (whose real name is Abel Tesfaye) told the outlet that he and Hadid were hanging out at her 23rd birthday party strictly as friends, even though an onlooker at her soiree seemingly implied otherwise.

On Friday, Oct. 11, a source told E! News that the Weeknd was in attendance for Hadid's celebration at Le Chalet, L'Avenue in Saks' lower level cocktail lounge in New York City. "You could tell that they were definitely in love and they both looked very happy being around each other," the insider added of the former couple.

The very next day, however, a member of the Weeknd's team provided a statement to People that definitely cleared up any confusion about the nature of their relationship. "They just attended [Hadid's party] as friends," the rep maintained. Neither Hadid nor the Weeknd have directly addressed the speculation about their relationship themselves, but that tracks with their usual style of relying on messages from reps versus discussing their private lives publicly.

The pair first started dating back in April 2015, but they ended up parting ways a few months later. "Bella and The Weeknd have taken a break," a source told E! News at the time. "Their schedules got very busy and it really cut into their relationship. They are still in each other's lives though, just not in the same exclusive capacity."

After they attended the Grammys together in 2016, it appeared as if they were giving things another shot. By November of that same year, however, an insider revealed to E! News that while they "are both still very much in love with each other ... they know they needed to officially break things off for a while," yet again.

Sometime around April 2018, though, it was looking like the on-off pair was back on, and things were seemingly going well until about August 2019. At that point, two conflicting reports about their status developed: A source for E! News said they'd ended things due to "distance," while another insider for Entertainment Tonight told the outlet that they "haven't broken up, but are working through things like normal couples do." It's all very confusing, and throughout their many reported breakups and makeups, Hadid and The Weeknd have remained consistently tight-lipped about their relationship status.

"There was no love lost between the two," a source told E! News after they were spotted hanging out for Hadid's birthday. "Abel just had a few things he needed to work on and his focus was elsewhere. They are in a better place right now but are trying to keep things on the down low. They both want to be more private about it this time around."

Whether or not "it" means that they former couple is considering a full-blown, committed relationship again remains unclear for now, but at the moment The Weeknd's rep is maintaining these two are just friends.