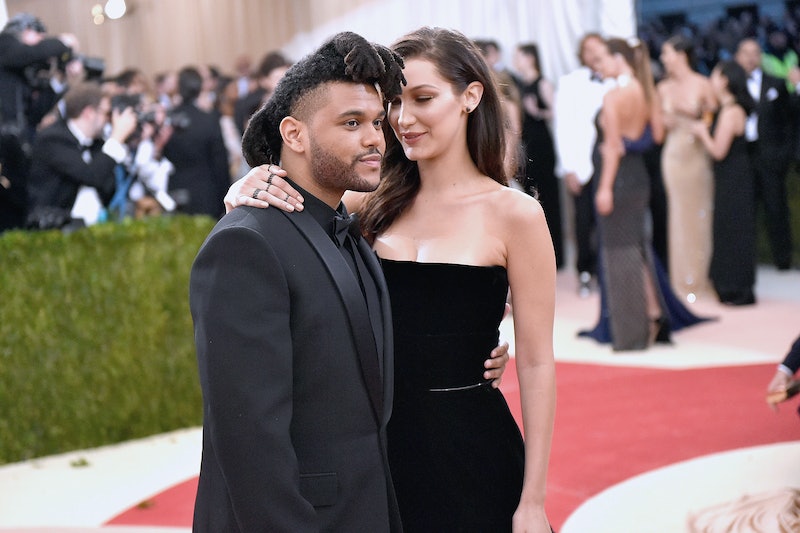 Between Pete Davidson and Ariana Grande, the Tatums, and Lena Dunham and Jack Antonoff, it's been a tough year for celebrity breakups. So when a couple who's previously called it quits decides to give love a second shot, that's reason for celebration. Bella Hadid and The Weeknd's relationship timeline is a shining example of just that. According to E!, the singer and supermodel got back together in April 2018 after splitting in 2016. And since Hadid is walking in the Victoria's Secret Fashion Show on Sunday, it may be helpful to have all the backstory laid out. A lot has happened between these two.

The Weeknd, whose real name is Abel Tesfaye, is known for his Michael Jackson-like range and gravity-defying dreads, while Hadid is the younger sister of fellow model Gigi Hadid. The couple first started dating in 2015, officially broke up roughly a year later for a pretty undramatic reason (spoiler: they were just too busy working), went their separate ways for a while, and then eventually found their way back to each other. Now, they seem to be going strong.

But you probably already know all that, right? You're looking for a more detailed breakdown? OK, OK. Here's what you came for.

More like this
Kim Kardashian & Pete Davidson’s Relationship Timeline From Start To Finish
By Jordyn Tilchen and Bustle Editors
Leona Lewis & Husband Dennis Jauch Welcomed Their First Child
By Darshita Goyal
Who Is Camila Cabello Dating? She's Getting Cozy With Lox Club CEO Austin Kevitch
By Radhika Menon
Who Is Bad Bunny Dating? Gabriela Berlingeri's Vocals Are Featured On His Song "En Casita"
By Radhika Menon
Get Even More From Bustle — Sign Up For The Newsletter