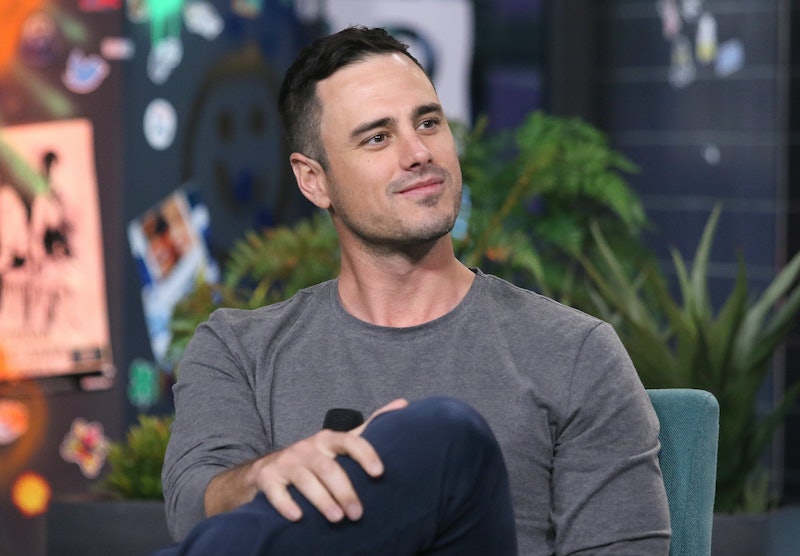 Sometimes the heart wants what it wants and by the end of Ben Higgins' Bachelor season, he had found himself falling in love with two women. But despite the fact that he was simply trying to be honest about his feelings at the time, looking back, Ben regrets saying "I love you" to JoJo Fletcher on The Bachelor. And he now realizes how much that revelation ended up hurting her when she failed to receive his final rose on the night of the finale.

"I wish I would not have done that," Ben told Entertainment Tonight after watching the footage back during Monday night's episode of The Bachelor: The Greatest Seasons — Ever!. "I was sorry for JoJo watching it back ... in the moment, the damage was done. I was sorry that I did that to somebody." Ben is, of course, referring to the fact that had he not confessed his deep feelings for JoJo, then she wouldn't have been so confident that he was going to propose to her by the end of the season, which could've lessoned the heartbreak she faced after being sent home.

However, despite the unfortunate outcome, Ben assured fans that he really did mean his declaration of love. "My intentions were good. I really do believe that my intentions were to make everybody know that just how much I cared," he continued.

In fact, what he felt for JoJo was so strong that even moments before popping the question to Lauren Bushnell, Ben was stating how much he could see himself being married to JoJo and living happily ever after — a definite mixed message if there ever was one.

"I really thought it was the right thing to do. I really thought telling JoJo just how much I cared would have allowed her as she went home to go, 'This was really hard and I know how tough this was and I'm going to be OK. But this was a real thing.' I thought that at the time," he explained to ET. "It wasn't a smart decision, it wasn't wise. It wasn't, like, a good thing I did. But that was my intention." JoJo seems to have no ill-will towards Ben. After all, she went on to become the next Bachelorette, and is still happily engaged to the recipient of her final rose, Jordan Rogers.

Ben was the very first in Bachelor history to say "I love you" to two different women on the show; however, at no point afterward was he ever tempted to pull a "switcheroo" and try to later pursue his runner-up (like Arie Luyendyk Jr.), nor did he ever second guess the decision he made. "I really did set up boundaries... clear mental, like, 'This is it, this is done, the show is over. I'm moving on, this is where we're going,'" Ben added. "I don't remember any moment of going, 'Oh, I am confused or conflicted.' It was, 'I'm investing into this relationship because this is what I chose.' And I'm proud of myself for that. I think it was a big deal."

The Bachelor may not have ended the way that Ben had expected — he and Lauren called it quits back in May 2017 — but considering that he is now happily engaged to his current girlfriend Jessica Clarke, it all appears to have worked out for the best for all parties involved.