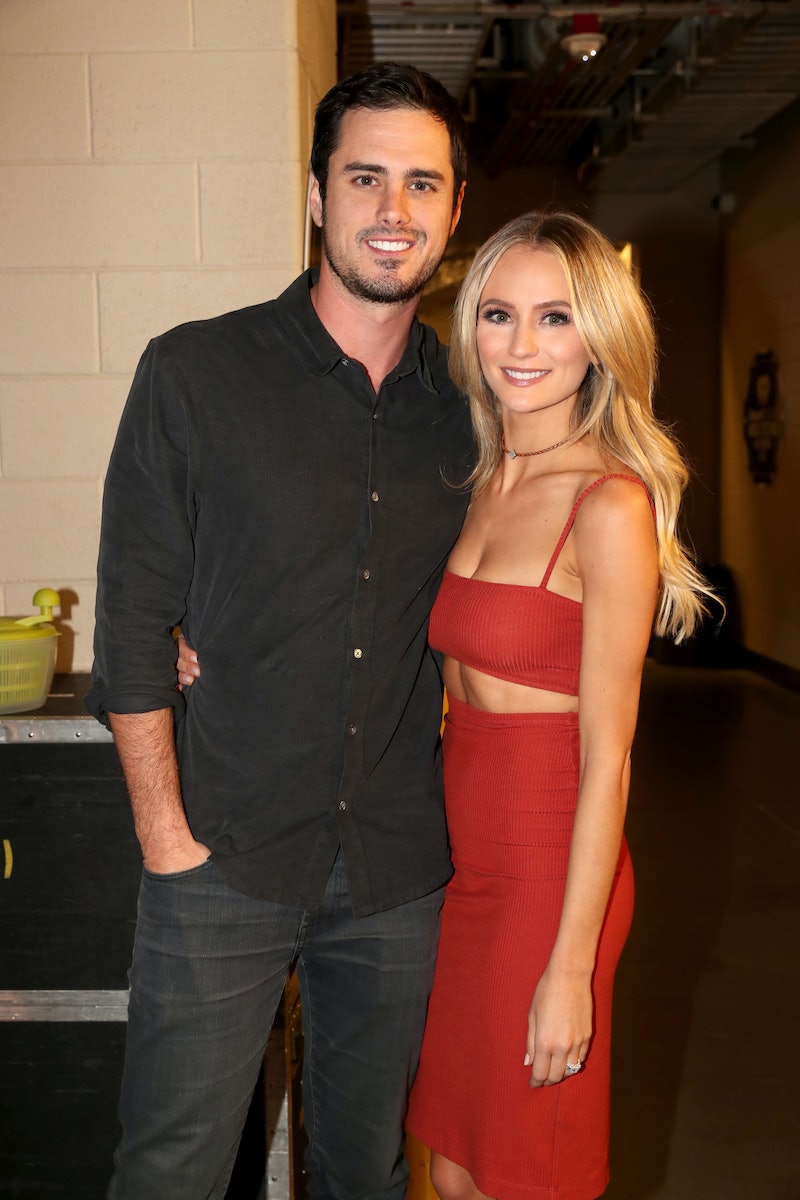 Bachelor breakups can tend to get a little drama-filled from time to time, but then there are some who are able to put the past aside and wish each other the best. Thankfully, Ben Higgins' response to Lauren Bushnell's engagement to Chris Lane proves that this former Bachelor couple falls into the latter category. Higgins had nothing but nice things to say about his ex-fiancée finding love with someone else and commented on the announcement during Tuesday's episode of The Ben & Ashley I Almost Famous Podcast.

"Ultimately, we left that relationship both of us, I think, saying, 'I hope life brings you a ton of joy, I don't want you upset and alone forever. I hope you find a partner as soon as possible. I hope everything that you want in this world that's healthy and good is given to you,'" Higgins explained to listeners. "And that's exactly how I feel. So, to go to Lauren: Lauren congratulations!"

"We're thrilled for you. You found a man that you love without any pressure and in a moment, after dating for a long time, you have said yes to spending your life with him and I could not be more excited for you. I want nothing but joy and everything you ever wanted that our relationship would've have brought you and Chris. Congratulations."

However, considering how long Higgins has been part of the Bachelor franchise, he knows better than to think that fans won't wonder how he's really feeling about all of this and think that he's simply burying his true thoughts and emotions in order to save face. But Higgins assures fans that this is not the case and he hopes everyone can finally close this chapter between him and Bushnell and be done with it.

"And the second piece of this is that I hope for Lauren and myself, is that my life isn't as closely tied to Lauren anymore. I hope that people aren't reaching out," he went on to say. "I hope this is a chapter being closed completely because I don't know Lauren anymore and my life isn't tied to her."

Needless to say, it seems pretty obvious that Higgins is ready to move on with his life. Not to mention, he's also very happy dating his current girlfriend, Jessica Clarke. And as for whether or not he thinks he'd feel the same way about his ex's engagement if he was still single himself, Higgins reflected:

"So if this was something that made her happy, I hope that I am a person, maybe I wouldn't be, but I hope I have a strong enough foundation to where I wouldn't be resentful but yet celebrate her and her happiness but also reflect on where I was at. And if I was alone at this point, whew! It's never fun to see an ex get engaged while you sit there alone in your room and go, 'Well this is fun.' But the truth is that's not the case, I'm happy."

Thankfully, they both seem to be in great relationships and it's nice to know that, even though they're no longer together, there are no hard feelings between the two of them.