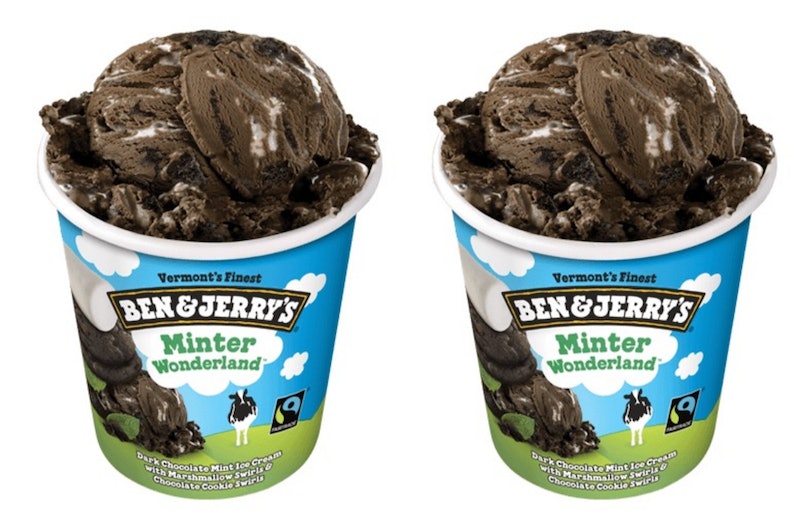 As the weather rapidly cools and the pages on the calendar turn, it’s become clear that we have survived another Spicening (or Pumpkin Spice Season, if you prefer). What’s more, now that we’re on the other side of Halloween, that means that it’s time for the next seasonal flavor to take the throne: Chocolate mint. Happily, the Target-exclusive Ben & Jerry’s flavor Minter Wonderland has arrived to usher in this new era, and, uh, folks? This spectacular new ice cream treat sounds delightful. Pumpkin Spice is dead! Long live Minter Wonderland!

Consisting of dark chocolate mint ice cream with both marshmallow and chocolate cookie swirls, Minter Wonderland promises to be “a wild ride through the wintriest, chocolate mintiest wonderland” for your taste buds. As the Ben & Jerry’s page on the flavor puts it, “Honestly, if this flavor was a toboggan, you’d already be on it.” It’s available by the pint exclusively at Target for the winter holiday season, with prices hovering around $4 per pint. (The exact cost might vary depending on where you are; Brand Eating reports it at “around $4,” for example, while Chew Boom pegs it more specifically at $4.39. Just, y’know, FYI.)

Bu although the flavor’s official announcement has only just arrived, eagle-eyed ice cream lovers got their first glimpse of the pint a full month ago: According to The Impulsive Buy, Minter Wonderland was first spotted on shelves by Instagrammer @snackforagers in the middle of October. It’s popped up on Instagram pages devoted to food on and off in the weeks since, always hovering just under the radar — but now, the word is out; the reviews are in; and the verdict? Well, it’s…

When @snackforagers actually taste-tested the flavor, they described it as straight-up “Thin Mint” ice cream. According to more in-depth reviews, though, there’s a bit more to it than just that (although honestly, the phrase “Thin Mint ice cream” is probably sufficient for many people, because… I mean… Thin Mint ice cream). The Impulsive Buy noted that “dark chocolate is the dominant flavor,” with the mint and marshmallow taking a bit of a backseat to the fudginess of the base. The highest praise went to the cookie pieces, which The Impulsive Buy said were less like bits of crunchy cookie and “more like a cross between a cookie and a brownie.” The ratio of ice cream to cookie was also apparently spot-on.

Your mileage may vary when it comes to the balance of the flavors, though. Instagrammer @kaketimereviews, for example, gave the pint and eight of 10, but didn’t really dig the marshmallow; meanwhile, @hustlekitten thought the marshmallow swirl was “plentiful” and helped counteract the bitterness of the dark chocolate ice cream. Both, however, agreed that they wished there had been a stronger mint flavor — which, of course, runs counter to what @snackforagers thought. Overall, though, everyone seems to dig it, so hey, at least there’s that!

Interestingly, this is not the first time Ben & Jerry has launched a flavor named Minter Wonderland; the UK and Ireland have had pints with that label on shelves since 2014, according to Brand Eating. However, the Minter Wonderland available across the pond is quite different from the one that’s just hit Target in the United States: Over there, it’s described as “mint ice cream with chocolatey chunks” — which, honestly, just sounds like mint chocolate chip to me. I’m sure it’s delicious, but I won’t lie; I find the new version is a lot more exciting, mostly because it’s a bit more unique.

Not that I would say no to either version, mind you. Mint and chocolate is always a winning combination in my book, and, well… both of these treats satisfy that particular craving.

If you’re in the United States, you can grab yourself a pint of dark chocolate Minter Wonderland at Target stores exclusively, literally right this very minute. Treat yourself. ‘Tis the season and all that!