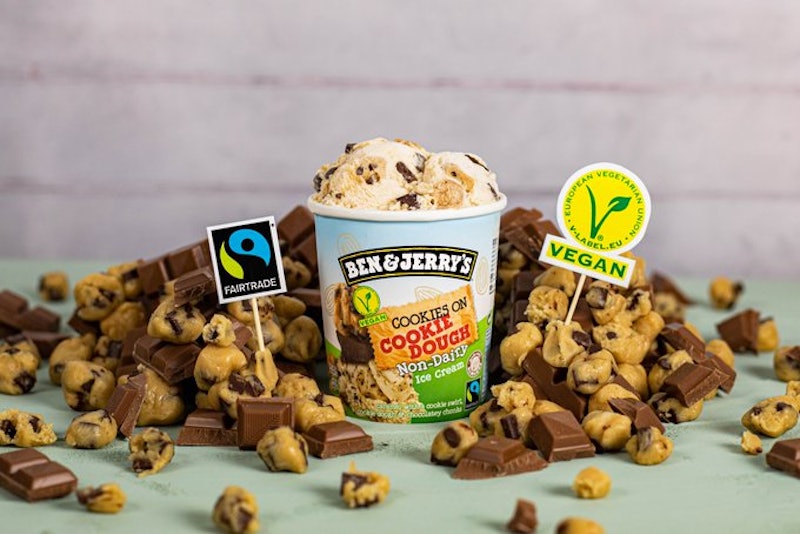 Ice cream is wonderful for heart-wrenching breakups, to cool you down on a sweltering day, or just because it tastes really delicious, and vegans and plant-based eaters alike shouldn’t have to miss out on the creamy dessert either. But fear not, frozen dessert front runners Ben & Jerry's Vegan Cookie Dough is finally here. Although there are tonnes of ice cream brands now especially catering towards a lactose-free crowd, when it comes to flavour not many brands do it like Ben and Jerry’s.

Ben & Jerry's now have a dairy-free version of their fan favourite Cookies and Dough, aptly called Cookies on Cookie Dough. The original popular ice cream was first thought up in 1989 when a fan suggested the ice cream company put cookie dough into their ice cream, which was a difficult feat back in the 1980s. Cookie Dough usually consists of creamy vanilla ice cream, chocolate chip dough, and chocolate chunks.

The new version will be made up of non-dairy caramel ice cream made with almonds, vegan cookie dough chunks, and chocolatey chunks. And just in case you thought it might not compare to the original, B-Corp Rhino Foods, the people behind the original Cookie Dough flavour are on board for the dairy-free version. The company's website states: “Here are two reasons to love our latest Non-Dairy. Firstly, it’s caramelly, & very cookie-ey. Secondly, it’s dairyless! Thirdly, you might need to sit down for this… it’s loaded with cookie dough chunks, now… VEGAN! Ok, three reasons. We’re not great with numbers but we are with chunks.”

In a statement, Ben & Jerry’s Flavour Guru, Priscille Moussy said: “Our classic Cookie Dough tub was concocted for people who know the joy (and the temptation!) of sneaking a bite or two of cookie dough before it makes it into the oven, which got us thinking… Why should our vegan fans have to miss out? We’ve been working hard, with our friends at Rhino, to create a vegan cookie dough that really stands up to the original. I think we nailed it.”

According to The Vegan Society, the amount of “Vegan desserts” pins saved increased by 329% on Pinterest, and in 2018, the UK launched more vegan products than any other nation. On top of that, the organisation also notes that the number of vegans quadrupled between 2014 and 2018, with 600,000 vegans in 2018. It would be silly for companies to not adapt to the times and make plant-based alternatives for some of their most beloved products. Ben & Jerry's for one is cottoning on. They were one of the frontrunners creating plant-based alternatives to their popular dairy ice creams back in 2016.

So, if you like variety, this is one of a few vegan-friendly, fair trade ice creams the company has to offer. Ben & Jerry's also make Coconutterly Caramel'd, created with caramel and cookie swirls with coconut flavoured ice cream. There’s also Chocolate Fudge Brownie, which is pretty much what it says on the tin. Peanut Butter & Cookies, consisting of delicious chocolate sandwich cookies. And lastly, there’s Chunky Monkey, a take on their classic frozen treat with banana-flavoured vegan ice cream paired with chocolate chunks and walnuts.

Vegans and those who are unable or prefer not to eat lactose won’t have to wait long to chow down, the new creamy caramel dessert will be hitting shelved this September at the recommended retail price of £6.