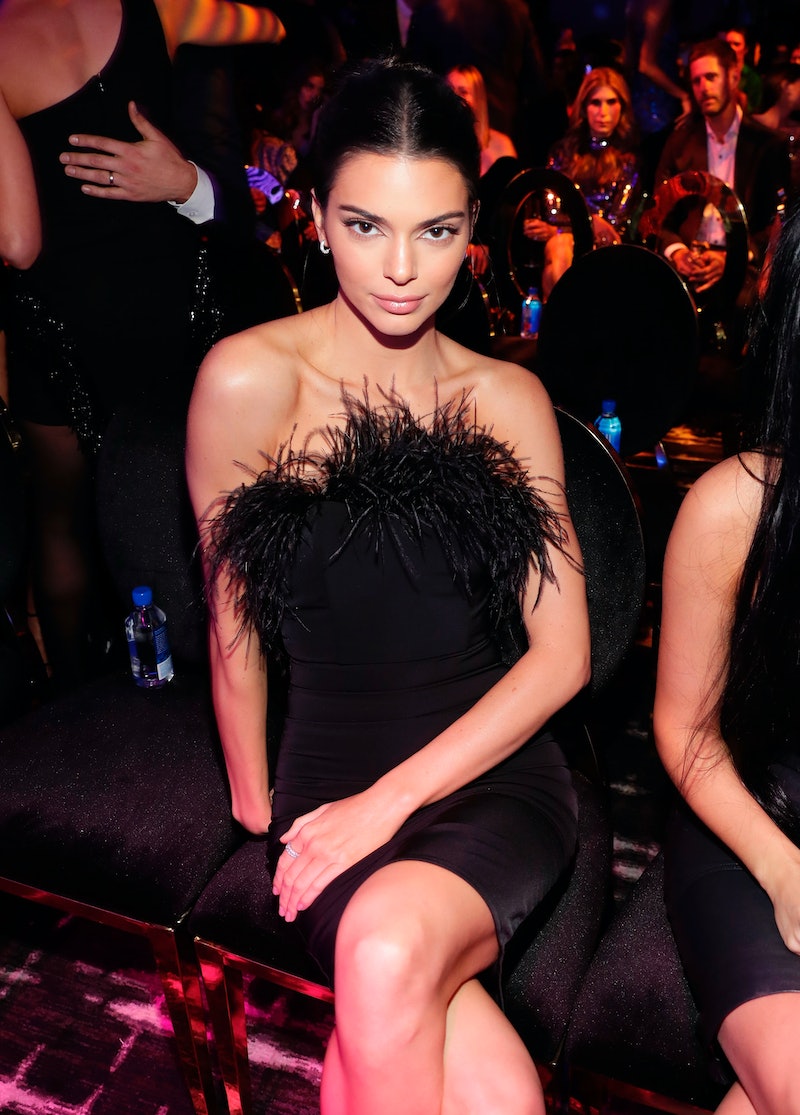 Kendall Jenner and Ben Simmons may not be "official" just yet, but that doesn't mean the pair can't be officially adorable on Instagram. As Us Weekly reported, Ben Simmons left a flirty comment on Kendall Jenner's Instagram post. And his comment hints that the on-and-off couple are currently on amazing terms.

On Wednesday, Dec. 26, Jenner posted a photo of herself, which was taken during the annual Kardashian Christmas Eve party. Naturally, the snap got the attention of more than a few famous faces as both Hailey Baldwin and Vanessa Hudgens commented on the reality star's post with some fun messages. But of course, Simmons' comment took the cake, especially because he was able to say so much without any words at all.

The basketball player wrote a very simple, yet very flirty message on Jenner's photo: two drooling emojis, a nod to how much he loves the snap. While it seems like a simple flirty comment at first glance, it's actually a pretty major message as far as these two are concerned, because of how private they've kept their relationship.

Neither Jenner nor Simmons have yet to post a photo of each other on their respective Instagram pages. Instead, they've been known to comment on some of their each other's specific posts, just as Jenner did on one of Simmons' posts in mid-December according to ELLE Australia. So, this most recent flirtatious display of affection was definitely pretty major for "Bendall."

While this does seem like a telling move, shippers should be wary of jumping to any conclusions about the couple's official relationship status at the moment. According to Us Weekly, a source revealed in November — around the time when Jenner and Simmons had reunited — that the couple's relationship isn't exactly exclusive. They claimed to the publication, "They’re not exclusive and they’ll never be boyfriend [and] girlfriend, but they’re still having fun and hooking up."

Their source went on to note that their casual relationship works because the two have so much in common with one another. "Kendall likes hanging out with Ben – he’s funny and can relate to a lot of things that Kendall relates to," the source said. They continued to tell Us Weekly, "He’s in the spotlight and understands that they need to be on the down-low. He also travels and works as much as she does, so it works for them."

All of these recent relationship reports come after the pair was first linked back in May, per Page Six. The publication reported they had been together for a couple of weeks at that time and went on a few dates. On one of those dates, which reportedly took place in Manhattan, a witness told Page Six that Jenner and Simmons "were smiling the night away with their friends."

But it seems like things fizzled out between them by the end of the summer. According to an August report from E! News, the pair's relationship had cooled off. Their source clarified that things were never official between them in the first place.

Seeing as though Jenner and Simmons' relationship has since sparked back up again, could their Instagram communications be a sign that things are truly heating up for them? Only time, and emojis, will tell.