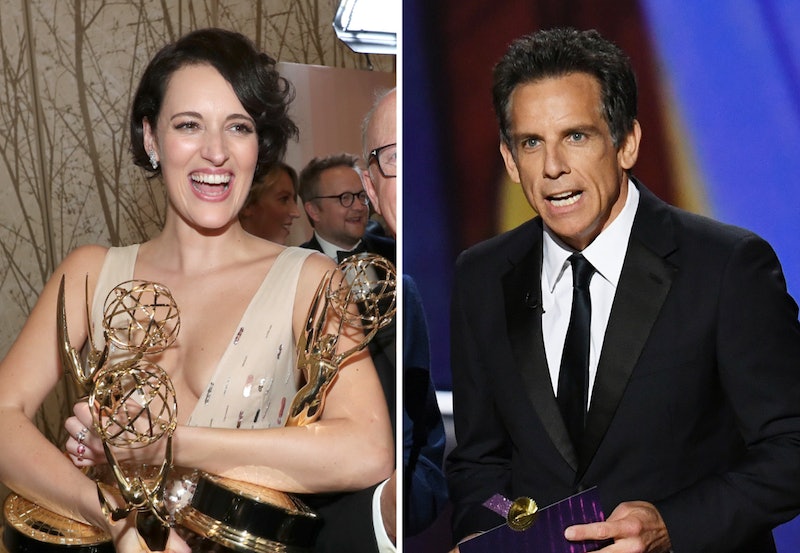 Fleabag is a great many things to a great many people. It's a series about intimacy, grief, and sisterly bonds, along with many other things that come with being a woman in today's age. But at the 2019 Emmys, Ben Stiller described Fleabag as "a comedy about a sex addict," and, as you can imagine, it didn't go down too well with fans.

The remark, which Stiller made on stage while presenting an award, may well have been scripted by a third party, but fans of the show don't care who came up with it. All they care about is getting justice for Phoebe Waller-Bridge's hard work.

Stiller's words were branded as disrespectful and reductive by Twitter users. "Ben Stiller out here slandering Fleabag, get your jumpsuits ladies we revolt at dawn," one rather hilarious tweet read.

It's true that the series involves sex, and it's also true that Waller-Bridge has described her character as having a "kind of sex addiction" in an interview with Vulture, but to sum up the entire series with those three words is just plain wrong.

Even the sexual parts have much deeper roots and purposes than what Stiller's comment lets on. "She feels pressure to be validated by sex — that's her weakness," Waller-Bridge told Vice in 2016. "I wasn't too interested in explaining where that comes from; that pressure is something a lot of women I've spoken to — as well as myself — deal with. I just massively amplified the fact that her whole life is defined by whether or not people desire her. In my mind, I decided that sex had ruined every aspect of her life."

She also explained that diving into other aspect of Fleabag's life was important for the stage-to-TV adaptation. When asked if she had to diminish her character's sexual obsessions for the screen, she told Vice: "No, weirdly, [we did that] because it was hard to dramatise [the sexual obsession] — it felt a bit relentless ... [For the show], I thought people would get the message that she's sexually driven from fewer points of contact. Also, I wanted to explore other aspects of her relationships with people — more than just sex."

Waller-Bridge said it best herself when, after winning one award, she told the audience: "It's so wonderful and reassuring to know that a dirty, pervy, angry, and messed-up woman can make it to the Emmys."