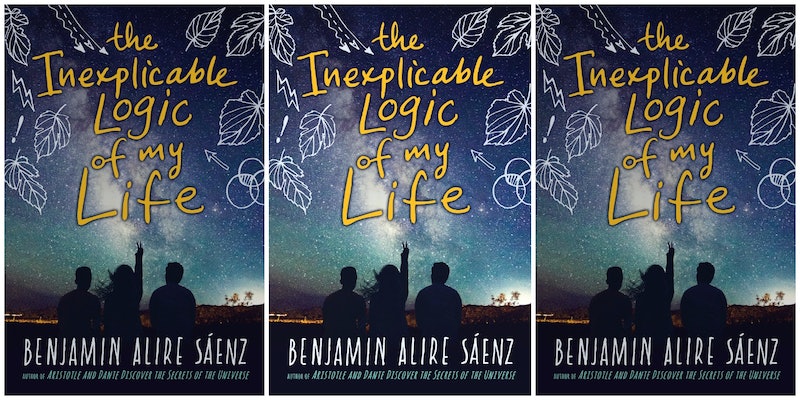 The author of Aristotle and Dante Discover the Secrets of the Universe is back with a new young adult novel hitting store shelves this March. Benjamin Alire Sáenz is going on tour to promote The Inexplicable Logic of My Life, out Mar. 7 from Clarion Books. I've got all the tour dates for you below, so keep reading, book nerds.

Sáenz has been writing for more than two decades, and is the author of 12 novels and children's books, two short-story collections, and five books of poetry. He won the PEN/Faulkner Award in 2013 for his short-story collection, Everything Begins and Ends at the Kentucky Club, becoming the first Latino writer to hold the honor.

Sáenz's early works include The House of Forgetting, Names on a Map, and He Forgot to Say Goodbye, but it was 2012's Aristotle and Dante Discover the Secrets of the Universe that catapulted him to stardom. A sequel to that novel, tentatively titled There Will Be Other Summers, is currently in the works.

The Inexplicable Logic of My Life will be his fifth YA novel. It centers on Sal, a white boy adopted by a gay Mexican-American man. As Sal tackles his senior year of high school, he is confronted with tough questions about his own identity, as are the novel's other teen characters.

Check out the tour dates for Benjamin Alire Sáenz's The Inexplicable Logic of My Life below.

The Inexplicable Logic of My Life is available now from your favorite retailer.