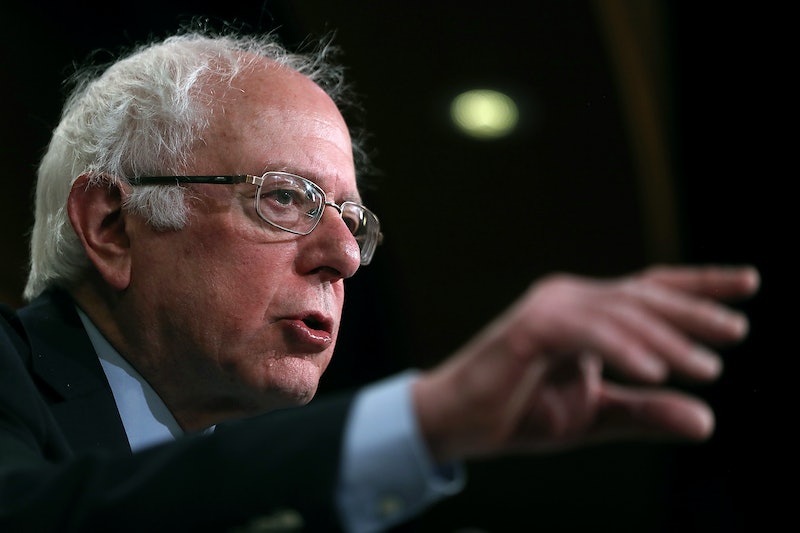 It's been less than two months since President Donald Trump took office, and the various scandals, controversies, and concerns are already hard to keep track of. You've got the hyper-controversial executive orders on immigration and refugees; the stripping of protections for trans students; the ever-widening investigation into ties between the Trump campaign and the Russian government; the endless stream of leaks; the tweets, all of it. But on Friday, Vermont Sen. Bernie Sanders hit Trump on the emoluments clause of the U.S. Constitution, directing attention to whether the president might already be in open violation of the nation's founding document.

Specifically, Sanders highlighted an AP article from Wednesday, March 8, noting that in late February the Chinese government approved a raft of trademark applications filed by the Trump Organization. Although Trump himself nominally stepped away from actively managing his company when he became president, he is still the owner.

TIME, among others, have called for Trump to be impeached based on his violation of the clause.

Incidents like what just happened in China have led many progressives and conservatives alike to suggest that the president has already violated the U.S. Constitution in a potentially actionable way. The Emoluments Clause of the U.S. Constitution, as Sanders spotlighted in his tweet on Friday, is easily and coherently interpreted as forbidding American elected officials, the president included, from accepting "any present, Emolument, Office, or Title, of any kind whatever, from any King, Prince, or foreign State."

Sanders is far from the only person to raise this point. In fact, Trump was sued just days after taking office over this very issue, the belief that his continuing ownership of his business empire means he can't help but violate the Emoluments Clause. The D.C. hotel he owns is a vivid example ― in addition to the fact that he's potentially in violation of his lease on the property thanks to holding elected office, it's an ideal destination for foreign officials to stay and spend some money in the hopes of currying favor. In the weeks following his election victory, in fact, The Washington Post reported that some foreign officials had already stayed there with that very goal in mind. One told the Post:

Why wouldn't I stay at his hotel blocks from the White House, so I can tell the new president, "I love your new hotel!" Isn't it rude to come to his city and say, "I am staying at your competitor?"

Trump attorney Sheri Dillon has denied that foreign officials staying at Trump hotels posed any emoluments issues, arguing that "paying for a hotel room is not a gift or a present and it has nothing to do with an office."

However, the above quote from an anonymous official would seem to complicate matters ― if people are staying in Trump hotels who otherwise wouldn't have, specifically because he's the president, and that decision advantages Trump, that sure sounds like an emolument. For the record, Merriam-Webster defines "emolument" as follows:

...the returns arising from office or employment usually in the form of compensation or perquisites...

Sanders' highlighting of the Emoluments Clause came hot on the heels of a similar statement by Sen. Dianne Feinstein. The four-term California Democrat described the 38 Chinese trademark approvals on Wednesday as "exactly what the Constitution's Emoluments Clause was designed to prevent," and accused Trump of "blatantly defying it," according to NPR.

Obviously, at the moment there are any number of attacks Democrats can be making against Trump, on both policy grounds and potential scandals ― a "target-rich environment," as they say. And, parallel to the ongoing Russia questions, one of the biggest voices on the American left just swiveled the spotlight onto the emoluments issue. While it remains to be seen what if anything comes of this scrutiny, it's clear that the Democrats haven't forgotten about it.