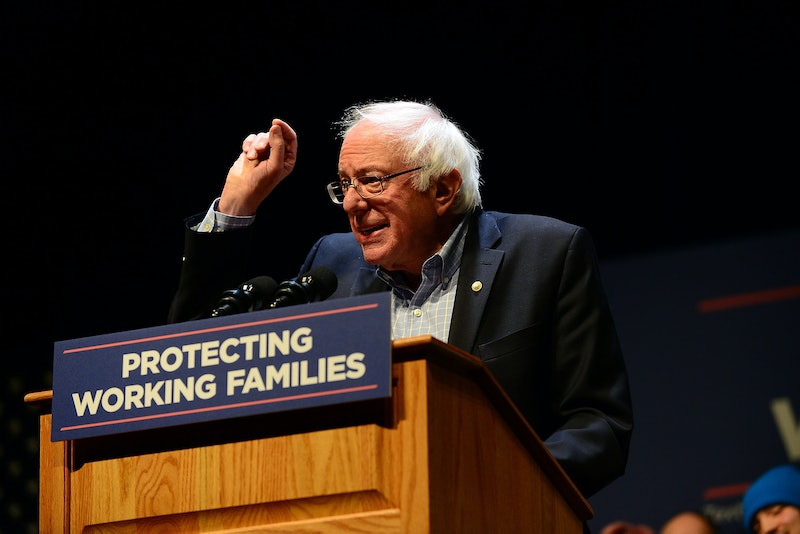 A small group of left-leaning congresspeople appear to be more willing than ever to drift away from the political center, though one of them shouldn't come as much of a surprise. According to multiple reports, Sen. Bernie Sanders' new job plan would guarantee employment for every American who is willing and able to work. It might sound like a big promise to make, but he suggests the government would be smart to back it. And he's not the only one saying so.

Sanders' team has underscored that the plan is in its earliest stages, and that certain logistics haven't yet been worked out. For instance, they haven't finalized a proposal for funding, and they also haven't quite worked out how to discipline workers who violate employment rules. But, all in all, the plan represents an eagerness to explore greater government intervention in the economy and job market.

According to The Washington Post, Sanders' plan would divide the United States into 12 regional districts. Within those areas, governments at the state and local level, plus American Indian tribes, would submit project proposals to the district offices. Those offices would be tasked with reviewing these proposals and sending the ones they approve to the Department of Labor.

The idea, according to the Post, is that coordinators for approved projects would then hire Americans to do the work. Under the proposal draft, they would not hire any worker for less than $15 an hour, and the jobs would include basic employment benefits, like medical leave and retirement options, the Post reports.

In the current political moment, a universal employment plan may be a moot point. With a Republican-held Congress and White House, a socialized jobs bill stands little to no chance of moving forward, even if it were lucky enough to make it to debate. However, the midterm elections are fast approaching, and the contest is expected to be fierce.

While Democrats face a massive gap that they would have to close in order to win a majority in the Senate alone, proposals like Sanders' could give more voraciously left candidates a viable topic to campaign on. Sanders, himself, is up for reelection, and has been extremely vocal about his views on social media in recent months, especially when it comes to health care and social security. (Sanders, it's worth remembering, is an Independent, though he does caucus with the Democrats.)

Sanders is also not the only elected official to advocate for a government-backed jobs proposal, either. Earlier in April, Sen. Kirsten Gillibrand tweeted that, instead of tax cuts, the Republicans might have tried investing in an employment plan. She wrote:

If Republicans could give $1.5 trillion in tax cuts to corporations and the wealthiest among us, why can’t we invest a similar amount in a guaranteed jobs plan for regular Americans who are unemployed and willing to work to better their local community?

Similarly, Sen. Cory Booker also recently announced the Federal Jobs Guarantee Development Act. His plan functions similarly to Sanders', proposing 15 work districts that would pay $15 an hour, or else whatever the typical minimum wage is for that work, according to Vox. Funding for the positions would reportedly come from federal coffers.

Historically, and especially so since the Obama administration, Democrats have largely avoided proposing sweeping, socialized economic plans. The word "socialism" in and of itself is incredibly polarizing, and there is often fear that, without centrists, legislation (and political campaigns) would lack the necessary backing. This, of course, was upended after Sanders' historic presidential campaign, which relied heavily (and proudly) on small donations, and emphasized a form of democratic socialism highly-palatable to younger voters. (Obama also campaigned on small donations, but Sanders never used a super PAC.)

That being said, while the plan could be incredibly divisive, the 2016 presidential campaign indicated that there is definitely a voter base that supports it, and some politicians seem eager to try it out.