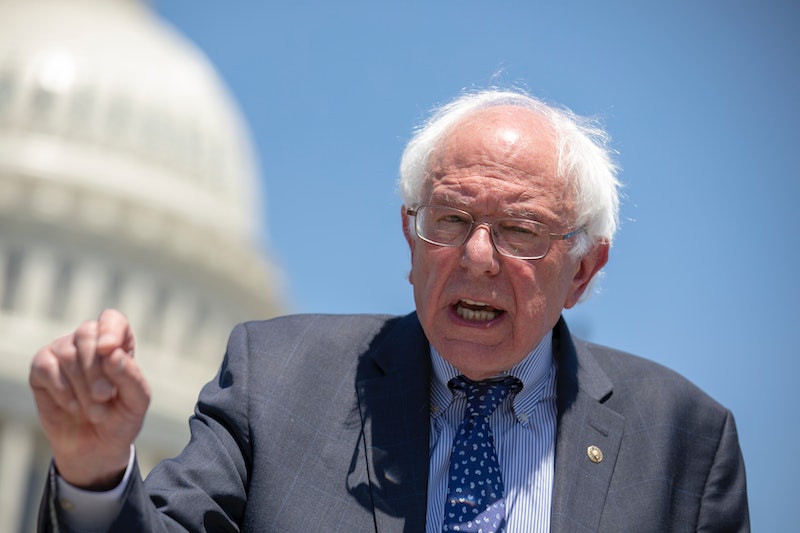 Less than a day after polls closed for the midterm elections, a shakeup in President Trump's cabinet has the national focus back on the future of the Russia investigation. On Wednesday, Sen. Bernie Sanders weighed in, responding to Jeff Sessions' resignation with a stern warning to Trump.

"President Trump must allow Special Counsel Robert Mueller’s investigation to continue unimpeded," Sanders wrote on Twitter. "Any attempt by the president or the Justice Department to interfere with Mueller’s probe would be an obstruction of justice and impeachable offense."

As the former attorney general, Sessions recused himself in 2017 from overseeing the special counsel's investigation into whether the president's campaign colluded with Russia to flip the 2016 election. As a result, Deputy Attorney General Rod Rosenstein has since supervised the investigation.

President Trump's deepening rift with Sessions over the recusal has been public for over a year. In a tweet in May, he indirectly referred to Sessions' actions as "an unforced betrayal," adding that he wished he'd picked someone else for the job. He has also reportedly toyed with firing Sessions in the past — presumably to replace him with someone who would put an end to the investigation — but was talked out of it by staff. Bustle has reached out to the White House and the Department of Justice for comment on the report.

Sessions endured the president's harsh public criticism without much in the way of retaliation — instead, affirming that he intended to continue doing the job he was appointed to do. However, on Wednesday morning, Trump apparently asked Sessions to resign, appointing Sessions' chief of staff, Matthew G. Whitaker as his temporary replacement.

In the resignation letter Sessions submitted to White House Chief of Staff John Kelly, he wrote that he was grateful to the president for the opportunity to serve as attorney general. "In my time as Attorney General we have restored and upheld the rule of law," he added, referencing his work in combating the opioid epidemic, and the hardline stance on immigration he helped to enforce.

Now, with Sessions out, Sanders, along with Democrats in Congress have expressed concern over the future of Mueller's investigation, particularly because Whitaker has previously denounced the investigation.

Rep. Nancy Pelosi and Sen. Chuck Schumer both forcefully emphasized that the independent counsel should remain in place, arguing that ending the investigation would constitute obstruction of justice. "Protecting Mueller and his investigation is paramount," Schumer told reporters. "It would create a constitutional crisis if this were a prelude to ending or greatly limiting the Mueller investigation."

President Obama's former attorney general, Eric Holder, similarly chimed in, warning against any effort to halt the Russia probe. "Anyone who attempts to interfere with or obstruct the Mueller inquiry must be held accountable. This is a red line," he told CNN. "We are a nation of laws and norms not subject to the self-interested actions of one man."

Trump, who continually refers to the process in such terms as "witch hunt" and "national disgrace," said Wednesday that he had no intention of calling for an end to the inquiry. "I could fire everybody right now, but I don't want to stop it because politically I don't like stopping it," he said. "It's a disgrace. It should have never been started because there was no crime."