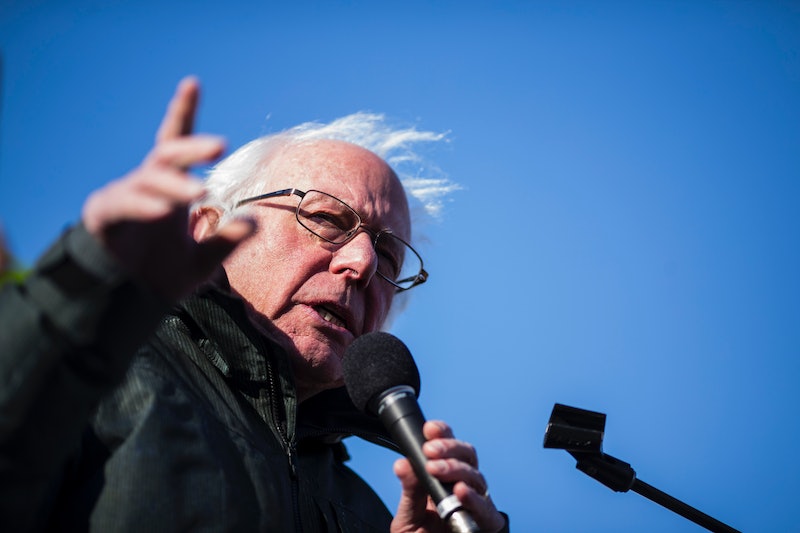 So far, 2018 has been a massive year for political titles: Michael Wolff's White House tell-all Fire and Fury sold over a million copies within the first week; Steven Levitsky and Daniel Ziblatt examination on the demise of democracy has spent every week since publication on the bestseller list, as has David Frum's Trumpocracy. Now, there is another major political title to look out for, because U.S. Senator Bernie Sanders is publishing a new book.

He might not have any official plans to try and win the White House in 2020 (at least, not yet), but Vermont independent and 2016 presidential candidate Bernie Sanders has announced plans to release a new book this year, just after the midterm elections. Expected from Thomas Dunne Books, an imprint of St. Martin's Press, on Nov. 13, Where We Go From Here is a guide for members of the progressive movement who want to know how to effectively fight back against Donald Trump's GOP. According to the publisher's press release, it will feature "America's most popular political figure speaks about what he's been doing to oppose the Trump agenda and strengthen the progressive movement and how we go forward as a nation."

I don't know about you, but that seems like the *perfect* read for voters in 2018 who want to take #TheResistance to the polls and beyond.

Where We Go From Here by Bernie Sanders, $28, Amazon

The title of his upcoming book, Where We Go From Here, is a question the former candidate for President has addressed several times since his primary loss to Hillary Clinton, and the Democratic Party's election loss to Donald Trump. In an op-ed that ran in The New York Times just days after the election, Sanders gave a basic outline for the kinds of legislation a GOP-lead government could, and should, focus on accomplishing.

In addition to his piece in The New York Times, Sanders has spent the last year and a half publicly speaking out against Trump's agenda, and in favor of the kind of serious reforms that made him such a popular grassroots candidate in 2016. His new book, Where We Go From Here, is sure to be an extension of the work the senator has been doing, and will continue to do, in Washington, D.C. and beyond.

This is not the senator's first experience as an author. In 2016, Sanders's book Our Revolution: A Future to Believe In spent several weeks on the bestseller list, and just this year, the audio version was nominated for a Grammy in the Best Spoken Album category. Last year, his Guide to Political Revolution for young people also made it to the bestsellers list.

Sanders may not have won the election, or even the primary, in 2016, but the politician has been anything but idle since his loss. As the senator has said many times before, his presidential campaign a beginning, not an end, to the revolution. It seems as though Where We Go From Here is a guide to the next chapter.

Where We Go From Here by Bernie Sanders, $28, Amazon

More like this
16 Novels That Paint A Realistic Portrait Of Abortion
By K.W. Colyard
Lauren Rae Is Bringing Back The Sex And The City Vibes In Her New Memoir
By Shahed Ezaydi
Annie Lord’s Memoir Will Make You Believe In Love Again
By Shahed Ezaydi
Disney+ Has a Nature Docuseries Narrated By Michael B. Jordan
By BDG Studios
Get Even More From Bustle — Sign Up For The Newsletter