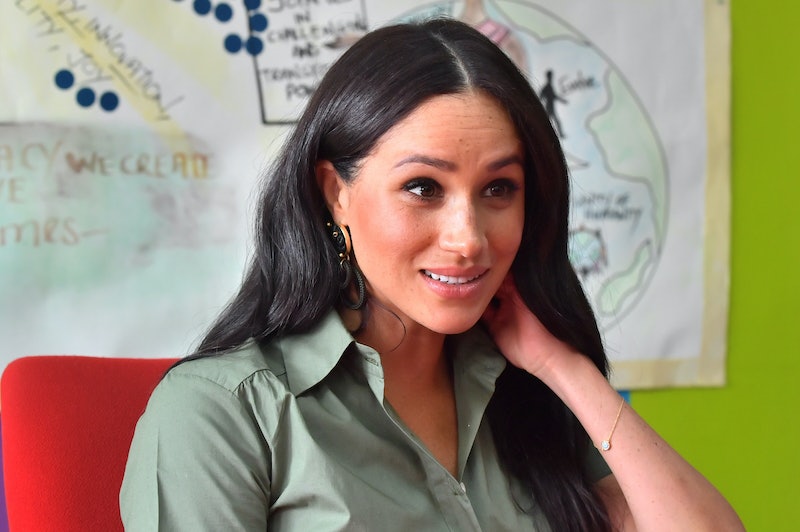 Meghan Markle's jewellery choices throughout her royal tour of Africa have been nearly as notable as her clothing sartorial decisions. Perhaps the standout moment of her jewellery wardrobe was when she wore a stunning oversized pair of Gas Bijoux gold earrings, which she paired with a simple black Everlane jumpsuit. That is, until now. Meghan today stepped out with a subtle yet very meaningful evil eye design bracelet, and her choice has set tongues wagging. Inspired by her look? I found some of the coolest evil eye jewellery you can buy, as inspired by The Duchess of Sussex herself.

While her £275 Alemdara bracelet looked low key and understated (along with her pared down outfit that consisted of a khaki trench dress from Banana Republic and matching Stuart Weitzman heels), some have commented that the Duchess' choice of evil eye bracelet may in fact carry a deeper meaning.

In fact, royal reporter Elizabeth Holmes believes the bracelet was a purposeful choice, and was chosen in relation to the recent news that Prince Harry is suing a British tabloid for their bullying behaviour of Meghan. "This is the sartorial equivalent of laying bare one's soul!!!" Holmes wrote on Instagram, adding: "The lack of colour draws your eye immediately to her face, to look at HER in the eyes."

The eye symbol has a specific meaning, and is thought to protect the wearer from malicious glares, and other evil forces. In fact, the idea behind the evil eye curse is that those who achieve success and recognition will also attract the envy of others, who will try to undo their success. Sounds like it could be related to recent events, no?

However, this is not the first time Meghan has chosen to sport the symbol, having previously worn it in jewellery pieces at September's U.S. Open tennis tournament, and earlier in the royal tour of Africa, where she wore an evil eye necklace.

It's clear that the evil eye symbol is a favourite of Meghan's, and if you want to get her look, here are seven of the coolest evil eye earrings, rings, necklaces, and bracelets:

This beaut pair of dangly huggies allows you to rock the trend in a super subtle way. And for only £10, these cuties are a total steal.

Made out of 18ct gold vermeil on sterling silver with a topaz stone in the middle, this investment piece will definitely look amazing on your middle finger as a statement piece.

The perfect gift to give to a loved one, this friendship bracelet features a turquoise pupil and pavé white sapphire gemstones set in 18 carat yellow gold plated silver. It also comes in rose gold and silver.

A super affordable, gorgeous style that would be perfect for layering, this handmade necklace is so incredibly pretty. It comes with an adjustable chain, meaning you can wear it in lots of different ways.

This delicate bracelet promises to give you, or the recipient if it is a gift, good karma. Wear it alone or layered up with several other chains and bangles for more of an impact.

With a striking blue topaz eye, this beautiful pendant comes with a super delicate, unique chain that is just as lovely as the evil eye detailing itself.

A blow out purchase, for sure, but if you're really into the trend, these are the ultimate gift to yourself. Made with blue and white pavé set diamonds, these studs would look beautiful alongside the Aldo huggies for double protection.

This article was originally published on Oct. 2, 2019