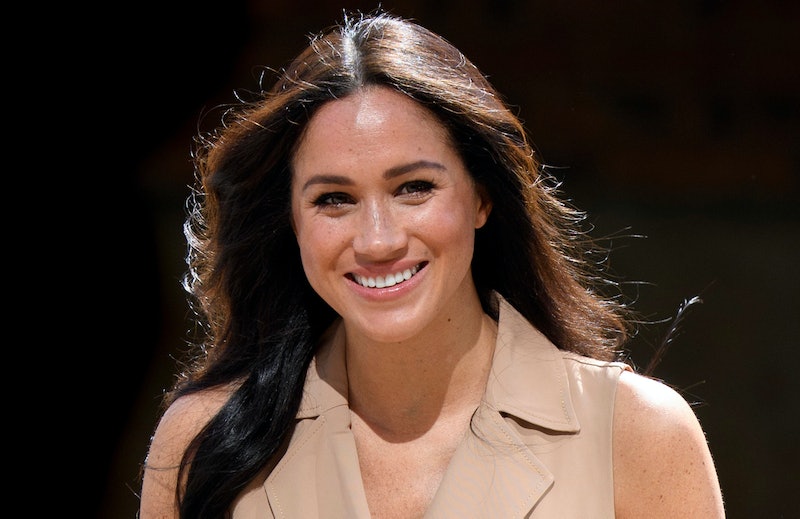 On the same day that the Duke and Duchess of Sussex announced they were suing the Mail on Sunday, Meghan Markle stepped out wearing an evil eye bracelet. And, according to one royal commentator, her jewellery choice wasn't an accident. Neither was the royal's whole outfit, said Elizabeth Holmes.

Instead of choosing a bold colour or print, Meghan arrived at the University of Johannesburg wearing a sleeveless khaki trench dress from Banana Republic and matching Stuart Weitzman heels. "This is the sartorial equivalent of laying bare one's soul!!!" Holmes wrote on Instagram, adding: "The lack of colour draws your eye immediately to her face, to look at HER in the eyes."

Holmes went on to describe the Duchesses dainty gold bracelet as the "chef's kiss." Designed by the brand Alemdara, the £275 piece features a subtle evil eye. As the brand explains, the symbol is believed to have the ability to "dispel negative thoughts and energy." Wearing it can ward off "jealousy from others" and, ultimately, protect the wearer from bad fortune.

Although the eye itself is often dubbed the "evil eye," it's the curse that it wards off that actually bears this name. The curse can be passed on via "a malicious glare," reports the BBC, and is said to mainly affect those who are envied by being successful or recognised.

Dating back thousands of years, the eye-shaped amulet appeared in a number of cultures from ancient Egypt to Irish tales. Meghan has worn it several times. The aforementioned bracelet was first seen on the Duchess at September's U.S. Open tennis tournament.

Earlier in the couple's South African tour, the 38-year-old donned a necklace bearing the symbol, reports the Express. It came from the same brand and also featured the hamsa hand: a second symbol of protection, notes Cosmopolitan. Back in December 2018, the Meghan chose a ring decorated with both the hamsa and the evil eye charm.

In the wake of the Mail on Sunday debacle, these subtle amulets have taken on a deeper meaning. On Tuesday, Prince Harry released a statement announcing Meghan's forthcoming legal action against the publisher of the newspaper. As the Guardian reports, the claim centres on the publication of a personal letter the Duchess sent to her father. Any damages awarded will be donated to an anti-bullying charity.

In his statement, Harry said the couple believe in "media freedom and objective, truthful reporting." But he went on to describe the "bullying" of Meghan by British tabloids. "A ruthless campaign that has escalated over the past year, throughout her pregnancy and while raising our newborn son," he wrote.

"They have been able to create lie after lie at her expense simply because she has not been visible while on maternity leave. She is the same woman she was a year ago on our wedding day, just as she is the same woman you’ve seen on this Africa tour."

Harry said "the only thing to do is stand up to this behaviour" and finished by mentioning the media treatment of his late mother, Princess Diana: "I’ve seen what happens when someone I love is commoditised to the point that they are no longer treated or seen as a real person. I lost my mother and now I watch my wife falling victim to the same powerful forces."

Wearing an evil eye several times over the past few weeks may just be a style choice, but it could also be a message to the press that Meghan is a human being, and their negativity is no longer acceptable.