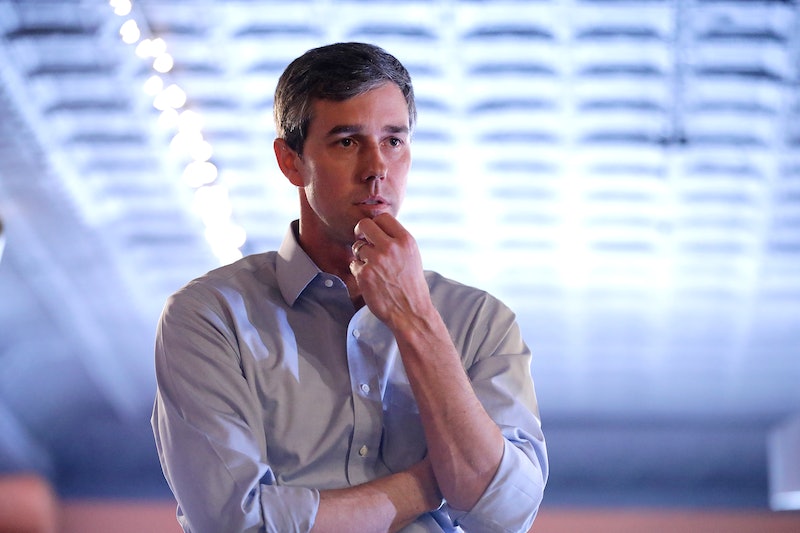 Democratic presidential candidate Beto O'Rourke joked about "sometimes" helping his wife raise their kids while on the campaign trail last week, and it did not go over well. On Friday night, O'Rourke responded to critics who said the joke ignores the struggles single parents face and also highlights a huge double standard between men and women politicians.

When O'Rourke was campaigning in Iowa this week, he reportedly made the joke that his wife Amy Sanders O’Rourke, was the one raising their kids “sometimes with my help,” according CBS News. Journalist Rebecca Traister, who covered Hillary Clinton's 2016 presidential campaign, noted that though O'Rourke's intentions may have been good, a woman candidate would not have been able to make the same joke — that she "sometimes" helped raise her kids — on the campaign trail. Or if she did, people likely wouldn't have laughed, because women are often still expected to be primary caretakers of children.

During a recording of the Political Party LIVE! podcast, O'Rourke responded to the criticisms, saying the joke was, "My ham-handed attempt to try to highlight the fact that Amy has the lion's share of the burden in our family — that she actually works but is the primary parent in our family, especially when I served in Congress, especially when I was on the campaign trail — should have also been a moment for me to acknowledge that that is far too often the case, not just in politics, but just in life in general," according to The Hill.

O'Rourke vowed not to tell the joke anymore, and also said, "I will be much more thoughtful in the ways that I talk about my marriage," according to CBS News.

O'Rouke has come under fire a lot recently. In January, Nia-Malika Henderson wrote about the road trip O'Rourke took to help decide whether he would run for president in 2020, saying that it "drips with white male privilege." He kept a kind of travel diary on Medium.com. “Jack Kerouac-style, he roams around, jobless (does he not need a job?) to find himself and figure out if he wants to lead the free world,” Henderson wrote in an op-ed for CNN. “This is a luxury no woman or even minority in politics could ever have.”

And the day before O'Rourke launched his presidential bid, he was feature in a Vanity Fair cover story about why he wanted to be in the Oval Office: "Man, I’m just born to be in it," he said — a quote that many on Twitter also thought was laden with entitlement and privilege.

O'Rourke also faced criticism for writing violent fiction while he was part of an activist hacker group as a teen, according to CBS. O'Rourke apologized for his past on CBS This Morning, saying, "Whatever my intention was as a teenager doesn't matter, I have to look long and hard at my actions, at the language I have used, and I have to constantly try to do better."