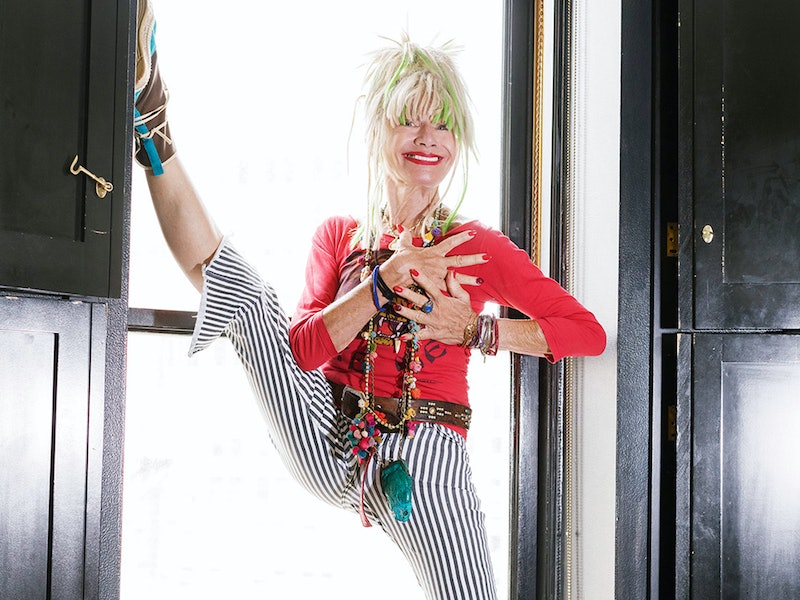 In a quiet hotel suite in New York City, Betsey Johnson sits cross-legged on a couch, recollecting the biggest secret she’s ever kept. The 75-year-old fashion designer picks up a tiny green grape from the fruit platter in front of her and rolls it between her fingers. She then selects a slice of apple from the plate, placing it on the table. She gently put the grape on top of the semicircle slice.

The apple, Johnson tells me, represents her left breast. The grape is the cancerous tumor she felt in November 1999 after her breast implant popped.

The story of Johnson and the no good, very bad grape-sized tumor is one she’s often told since 2000, when she was declared in remission. The tale goes like this: Johnson, who was 57-years-old at the time, had saline breast implants that were in her body far too long. The left implant popped one brisk Saturday morning in the Hamptons, disappearing into her body as she slept. Johnson used the leak as a sign she should get both loathed implants removed. And so she did. She was elated to be rid of the saline sacs she says her ex-boyfriend pressured her to get. After all, she felt more like herself without them.

But a few weeks after the removal, Johnson felt along her scar to check the healing process. There, she felt a grape-sized lump. That stomach-dropping moment of discovering a concerning mass quickly lead her to a clinic.

“When you go get a mammogram or sonogram and they don't let you go home, you know you're in trouble,” Johnson tells me. “That’s what happened.”

And this is where the secret comes in. After she was diagnosed, Johnson didn’t tell a soul about her cancer, with the exception of her beloved daughter, Lulu, who was 24 years old at the time. No one knew she was going to radiation every morning at 8 before heading to the showroom. No one knew about her lumpectomy, which removed the tiny mass of cancerous cells on Christmas Eve 1999. No one knew about the six months of hospitals, treatments, worries, and waiting.

Not a soul but Lulu knew Betsey Johnson, a famed name in quirky fashion, had cancer — not the press, not her employees, not her manager, not even her own sister.

“I cartwheeled through it,” Johnson says. “I did my fashion show through it. I just didn't even want to think about side effects. I was secretly at my 8 o’clock zap appointment. That was it. I kept quiet.”

It’s hard to believe Johnson could ever keep a secret. She is known for being a spunky extrovert who is loud, unfiltered, and unapologetically herself. The truest definition of an open book, Johnson has no hesitation telling me about her decades younger boyfriend with candid detail upon first meeting her. She is charmingly scatterbrained, a true creative. And, above all, she is boisterous and always says what’s on her mind.

Her experience with breast cancer hints at an unknown side of Johnson that few have ever seen. Though she’s built a name for being wild, loud and rambunctious, Johnson can be extremely private — especially when she knows people would dare to count her out.

“My biggest fear was that people were gonna think I was going to die,” Johnson says about her decision not to tell. “That I wasn't going to pay my bills. That I'm not going to design. That I’m not going to feel good. That it was over.”

My biggest fear was that people were gonna think I was going to die.

This is not the story that Johnson has told over and over again for the past 17 years. This is the story of a secret. This is the story of how not all people fighting breast cancer change their wardrobe to pink and boldly share their journey. Though that is the right road for some, it isn’t the path for everyone — and it certainly wasn’t the road for Johnson.

This is the story of a woman who didn’t want the attention and pity that comes along with revealing a cancer diagnosis. She just wanted to pretend she wasn’t sick. And so she did.

In 2014, the most recent year numbers available, 236,968 women in the United States were diagnosed with breast cancer, according to the CDC. That same year, 41,211 women died from the disease. Current estimates say one in eight women are likely to develop breast cancer in their lifetimes.

All of these are statistics haven’t changed much since Johnson’s diagnosis almost 18 years ago. But what has changed is society’s outlook on breast cancer.

Johnson's illustration of Rosie the Riveter, which she created to honor breast cancer awareness, detection, and prevention.

Johnson says breast cancer felt almost like a death sentence in 1999. Now, many women who are diagnosed with the type of cancer are labeled “fighters,” indicating they are engaged in a battle they could possibly win. Johnson says that wasn’t the case just two decades ago. If she would have said the word “cancer,” the fashion industry would've thought she was a goner.

“After I left the doctor, I had my taxi ride to decide how I was going to handle this shit,” Johnson says. “I had to kind of fast forwarded to what it would be like to tell everybody. My partner and best friend. My family. My people at work, which were also family. I just can't face that. I can't. To this day, they'll tell me what an actress I was.”

To this day, they'll tell me what an actress I was.

The acting finally came to an end in September 2000, when Johnson told everyone in her life about her diagnosis in the days leading up to her New York Fashion Week. It was almost a year after her initial diagnosis and about five months after she was declared in remission. Her “family” — which included biological relatives, her workers, and her closest friends — were the first to know. Tears and disbelief filled the room where they gathered as a kickoff to fashion week, as they all questioned why the fashion designer didn’t tell.

And then came telling the press and the public at a cancer charity event days later, which helped usher in fashion week with philanthropy. Johnson says she took two minutes to tell her story, not wanting to be too much of a downer on the day. Again came the shockwaves, the news stories, the disbelief, and — for Betsey — the affirmation that keeping this all a secret was the right decision. The attention now was on her survival, not her potential demise.

Johnson's celebrates her line at New York Fashion Week in September 2000, the same year she disclosed her status as a cancer survivor at the event.

But as much as she didn’t want to be defined by her diagnosis when going through treatment, Johnson was determined to use her experience after the fact as a way to help others.

“I just hope all my customers and girls will get earlier mammograms and checkups. I feel it’s time to give back, if there’s anything I can give,” a New York Post article on the “bombshell announcement” quotes Johnson as saying at the charity event. “I want to use myself as a spokesperson for early detection now.”

And she’s done just that. Since disclosing her secret 17 years ago, Johnson has gone on to be an outspoken advocate for breast cancer research and prevention. She’s decked out her retail stores for Breast Cancer Awareness Month, designing charitable apparel as a way to have her designs give back to the cause. She's spoken at appearances to tell her story and spread the importance of early detection. She’s done the walks, done the press, and done her part to speak up after staying silent around her own struggle.

"I love being a real advocate, really pushing my customers to take care of business."

Johnson has used her platform as a famed fashion designer to claim her place as a survivor, helping other women to catch those no good, very bad grape-sized tumors before they become untreatable.

“I still try to remember to tell the girls, ‘Get your damn mammogram. Don't fool around with this. Just get it done,’” she says, referring to her customers. “I love being a real advocate, really pushing my customers to take care of business. Don't be scared of it. Just get tested. If you've got it, do something about it.”

But even Johnson doesn’t always practice what she preaches, making anyone shake their head at the irony.

“Don't put it off,” Johnson says, adding in the same breath. “I'm already years late on mine...”

Johnson is intensely lovable even in her contradictions, like the fact that she’s years late on her own cancer screening. She’s not the perfect spokesperson, that’s for sure. But she wasn’t the “perfect” cancer patient either, forgoing the ribbons, the pink, and the diagnosis disclosure we all expect of those dealing with the disease. But that’s just Betsey.

When it’s time for me to leave Johnson’s hotel room, it takes me 10 minutes to finally make it out the door. The designer hugs me for a “final” goodbye on three separate occasions, each time pulling me to another corner of the hotel room to show me “just one more thing.”

Though she arrived less than 24 hours before our meeting, the hotel room looks perfectly lived in and Johnson knows where everything is among the organized chaos. She guides me around the stacks of papers and piles of clothes, allowing me to peek through her personal items. As I do, she hops from topic to topic, touching on everything from her political views to falling in love at 70 to talking about problems in her personal life.

It’s as if she has nothing to hide.