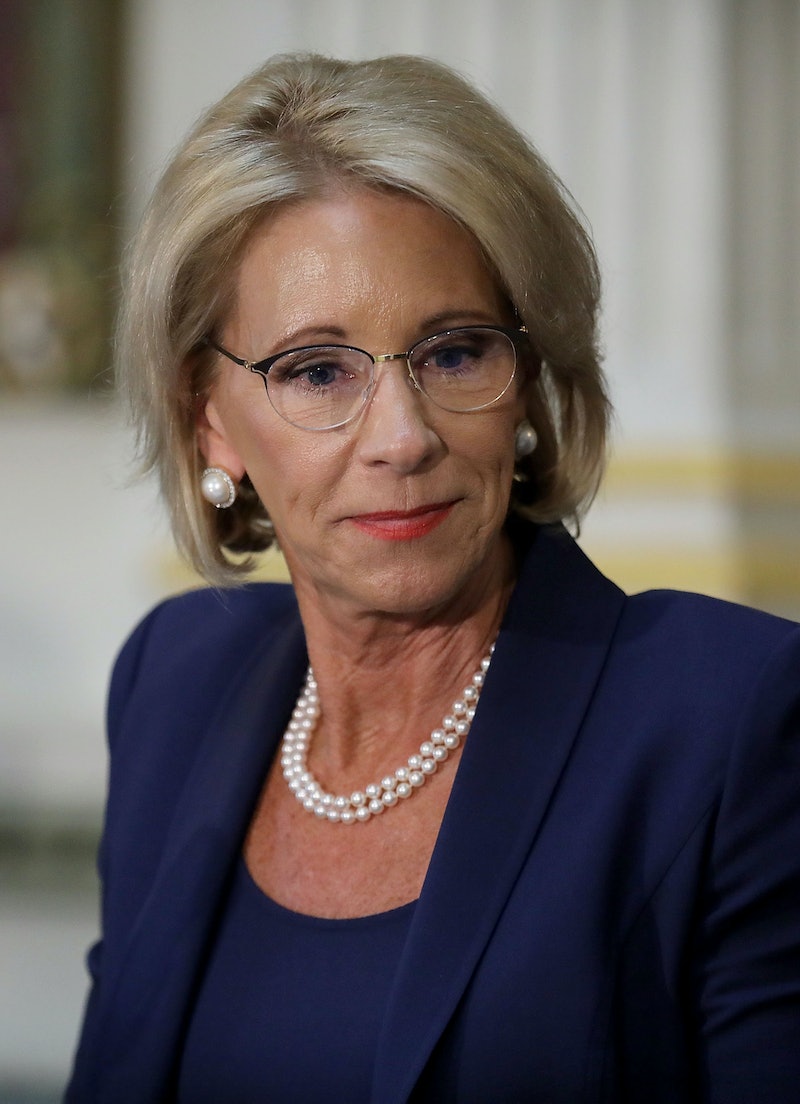 The Trump administration has taken the next step in its fight to change the treatment of gender issues on college campuses. On Friday, Secretary of Education Betsy DeVos released proposed rules for schools' sexual harassment policies. Her rules would encourage schools to investigate a narrower range of misconduct allegations and give more assistance to the accused.

"Secretary DeVos' long-awaited rewrite of Title IX enforcement regulation is worse than we thought," Jess Davidson of End Rape on Campus said in a statement on Friday. "It will return schools to a time where rape, assault, and harassment were swept under the rug."

To DeVos' mind, the proposal would give accused students protections they lack. "The proposed regulation is grounded in core American principles of due process and the rule of law," the Education Department declared in its announcement, per The Washington Post. "It seeks to produce more reliable outcomes, thereby encouraging more students to turn to their schools for support in the wake of sexual harassment and reducing the risk of improperly punishing students."

If implemented, this proposal would implement stricter rules in place of guidelines that were issued during the Obama era. Those informal directions — which DeVos rescinded in September of last year —  offered suggestions to help schools create a more sympathetic environment for accusers, including lowering the burden of proof required in their cases. It recommended a "preponderance of the evidence" standard, meaning that campus officials should rule in favor of the accuser if that person's story is decided to be more likely truthful than not.

DeVos' proposal has three main components, per The Washington Post. It defines sexual harassment and assault (both are offenses that schools are required to combat by the law Title IX), determines the conditions that mandate a school to look into accusations, and explains how schools should conduct such investigations.

The proposal's definition of sexual harassment is much narrower than that put forth by the Obama administration. DeVos labels it as "unwelcome conduct on the basis of sex that is so severe, pervasive and objectively offensive that it denies a person access to the school’s education program or activity." The previous definition was "unwelcome conduct of a sexual nature."

Another included rule mandates that schools only need to investigate incidents that were officially reported to someone in the administration who has the "authority to take corrective action." They don't need to respond to an incident of which they were made aware through a different channel. Schools also can choose not to respond if the alleged incident took place off-campus at an unaffiliated event or location.

Once an investigation is launched, the proposal states that accused parties have a right to legal representation and to cross-examine the accusers. It also requires that sexual assault hearings for college students are conducted live, per BuzzFeed News, and that students are disciplined only if they acted in a way that was "clearly unreasonable in light of the known circumstances."

The new proposal will become law if implemented. First, though, there's a 60-day public comment period — during which you can give DeVos feedback — and a stage for Education Department employees to make changes. You'll be able to add comments to the proposal as soon as it's put on the Federal Register next week.