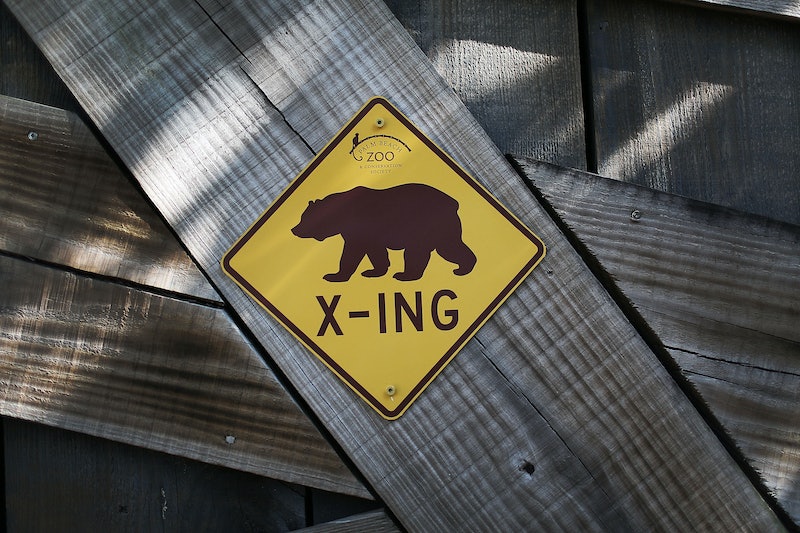 Donald Trump's pick for education secretary is worried about kids' safety in schools. That's right — there's bears out there, and children need to be protected. Other kids or teachers with guns in a school? No big deal, because what if there's a bear? That was Betsy DeVos' argument regarding guns in schools when asked by Connecticut Sen. Chris Murphy if firearms have any place in or around schools. DeVos said she believes the issue of guns in schools is best left to states to decide since some states have different threats to consider. Like bears.

"You can't say definitively today that guns shouldn't be in schools?" Murphy asked incredulously. "Well, I will refer back to Sen. Enzi and the school that he was talking about in Wapiti, Wyoming. I think probably there, I would imagine that there is probably a gun in the school to protect from potential grizzlies," DeVos replied.

Let's make one thing clear: Even if there is a grizzly bear outside a school in Wyoming, it's highly unlikely that the bear will get inside the school. And in the case that school is about to be out and the children need to get home, there are generally, you know, police officers and animal control employees who can come and take care of the situation by monitoring the animal until it leaves the premises. (I say this, because as someone who sometimes couldn't get to/from school because there was a moose outside the door, I ensure you that there are protocols in place that don't involve a gun needing to be in the school.)

Of course, a bear might get into a school every now and then, like it once did in Bozeman, Montana. However, let's assume that's a one in a million chance.

When it comes to gun violence in schools, according to a study performed by the CDC's division of violence prevention, "between 14 and 34 school-age children are victims of homicide on school grounds on their way to and from school — each and every year." And that's just those who are fatally wounded. FBI data analyzed by CNN showed that schools were the second most likely place for an active shooting to take place. And Everytown for Gun Safety performed a study of its own that found in three years there were 160 shootings in schools, over half of which where the shooter "intentionally injured or killed at least one other person with a gun."

In her confirmation hearing, DeVos said she would support President-elect Donald Trump's proposal to ban gun-free school zones but that her "heart bleeds and is broken for those families that have lost any individual due to gun violence."

Because apparently what's important is being protected from bears.

More like this
The LGBTQ+ Action Plan For Wales, Explained
By Sophie McEvoy
Here’s Where The NHS Nurses’ Strike Currently Stands
By Sophie McEvoy
6 Organizations Fighting Police Brutality That You Can Support Right Now
By Syeda Khaula Saad and JR Thorpe
'Brookside' Is Coming Back & Soap Opera Fans Are Going Wild
By Sam Ramsden
Get Even More From Bustle — Sign Up For The Newsletter
From hair trends to relationship advice, our daily newsletter has everything you need to sound like a person who’s on TikTok, even if you aren’t.