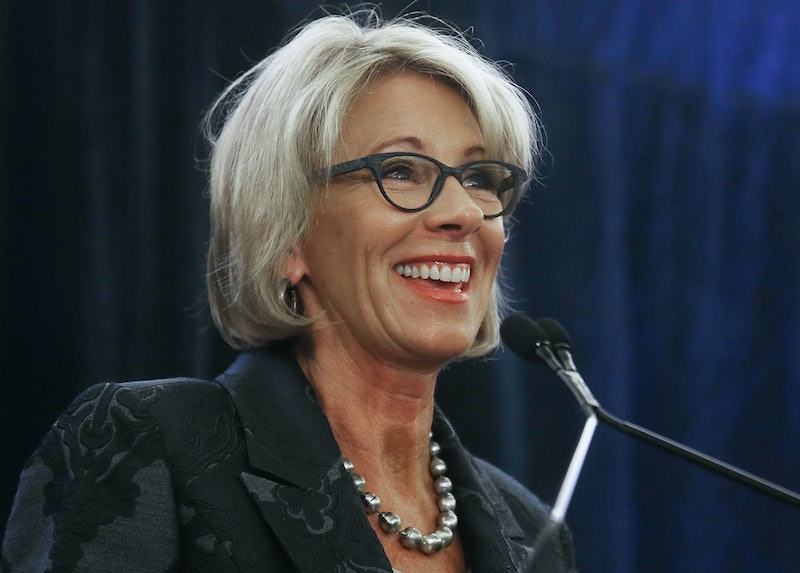 President Trump's secretary of Education entered the White House in a blaze of controversy. From suggesting during her Senate hearing that guns are necessary in public schools to protect kids from grizzly bears to the historic first of needing Vice President Mike Pence's vote to win her confirmation, Betsy DeVos has already faced some heat. Now, it looks like she will be facing more, since DeVos rescinded Obama's protections for student loan borrowers.

According to Bloomberg, "During Obama’s 8 years in office, some 8.7 million Americans defaulted on their student loans, for a rate of one default roughly every 29 seconds." Clearly, there are problems with the issuing and management of student loans in the United States — and that's why Obama tried to tackle them. Before leaving office, the Obama administration put in place protections that would block "guarantee agencies" (think of them as government-backed loan sharks, in a sense, responsible for making good on certain types of student loans) from taking advantage of those with student loan debt and charging, what critics would call, unfairly high fees. There was also a directive to push loan servicers towards greater customer accountability and to be rewarded for helping students stay on tracking for pay off their loans.

But on Tuesday, in a move that critics argue will make it easier for students to be taken for a ride by lenders, DeVos submitted a press release explaining why she intends to reverse those protections:

The student loan servicing procurement affords us a significant opportunity to improve outcomes and experiences for federal student loan borrowers, as well as demonstrate sound fiscal stewardship of public dollars ... we must create a student loan servicing environment that provides the highest quality customer service and increases accountability and transparency for all borrowers, while also limiting the cost to taxpayers.

Some experts view DeVos' move as part of the Trump administration's efforts to take away a safety net for those who borrow student loans, and instead side with the companies that would collect on the loans. In an interview with Market Watch, Alexis Goldstein, a senior policy analyst at Americans for Financial Reform, said, "Undoing these memos is a very concerning indication of how much [Department of Education officials] value protecting borrowers versus how much they want to insulate servicers." Goldstein added, "Is this meant to be a message that says we are less concerned with borrowers and more concerned with protecting servicers even if they made mistakes in the past?"

This week's move was only the latest DeVos' measure that makes it harder for Americans with student loan debt. Last month, the Department of Education reversed another Obama-era policy barring guarantee agencies from charging a default borrower collection fee. At this rate, it likely won't be the last of the bad news for Americans with student loan debt.