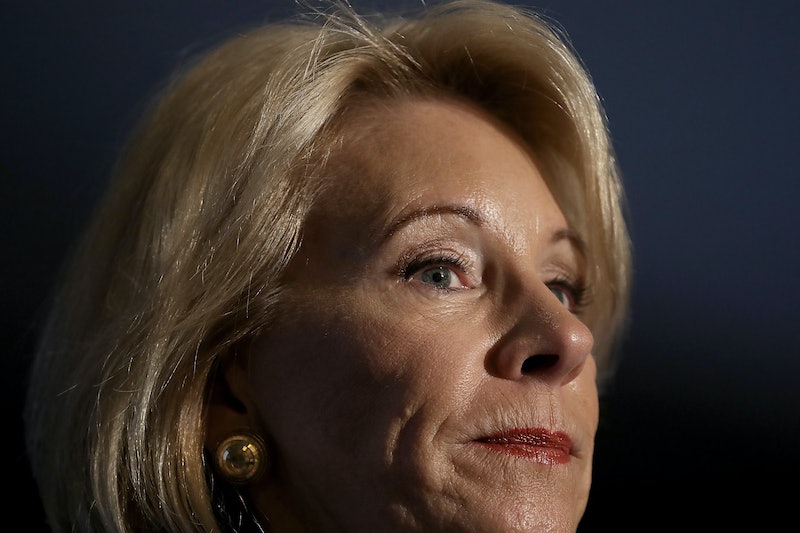 According to the New York Times, Secretary of Education Betsy DeVos' proposed new rules on campus sexual assault could result in a dramatic decrease in the number of investigations into sexual misconduct complaints at colleges. The agency itself determined this through an internal study, the Times reports, which it commissioned to analyze the effects of new proposals drawn up by Betsy DeVos. Bustle has reached out to the Department of Education for comment.

DeVos announced in September 2017 that she would be rescinding Obama-era guidelines on campus sexual assault. Those guidelines, which determined which universities would be eligible for Title IX funding, increased the obligations of school authorities when confronted with allegations of sexual misconduct; DeVos met with "men's rights" organizations before scrapping those rules, and victims' rights groups promptly sued her over the decision.

Almost a year later, the Times reported that DeVos was preparing new guidelines crafted to protect the rights of accused sexual predators and limit the liability of colleges that investigate sexual misconduct claims. Under the new rules — which have not yet been formalized — schools will only be held accountable for formal sexual misconduct complaints, filed through "proper authorities" and regarding incidents that are alleged to have occurred on campus.

The Education Department commissioned an internal study to estimate the impact of the new policies, the Times reports, and found that they would result in significantly fewer investigations per year into campus sexual harassment. While colleges and universities typically conduct an average of 1.18 sexual harassment investigations per year, the new policies would bring that average down to 0.72 per year, the agency determined.

The findings were similar regarding elementary and secondary schools, according to the Times. The limited data available suggested that, while those school districts currently investigate around 3.23 episodes of reported sexual harassment per year, they would only investigate 1.61 allegations per year under the new rules.

A spokesperson for the Education Department denied that money played any role in the crafting of the new rules, telling the Times that "the substance of our proposal will not be built on any supposed financial impact and has played no role in Secretary DeVos's decision making." According to the Times, the new rules would save schools between $327 million and $408 million over the next decade.

The new rules haven't been formally adopted yet. They must first be vetted by the White House's Office of Management and Budget, which will conduct its own study on the rules' economic impact before publishing them for public comment.

Adaku Onyeka-Crawford, senior counsel at the National Women's Law Center, said that the agency failed to take into account the impact of assault survivors' whose allegations are not pursued by school authorities.

“It strikes me that one thing that’s not included in the cost is the one in five women dropping out of school because their school won’t investigate their complaints of sexual violence," Onyeka-Crawford told the Times, "and that is a cost that affects everybody,”

More like this
24 History-Making Black Women You Probably Didn't Learn About In School
By Ayana Lage and JR Thorpe
25 Inspiring Quotes From Black Women To Celebrate Black History Month
By Kyli Rodriguez-Cayro and JR Thorpe
6 Organizations Fighting Police Brutality That You Can Support Right Now
By Syeda Khaula Saad and JR Thorpe
Watch Jacinda Arden’s Devastatingly Honest Resignation Speech
By Sam Ramsden
Get Even More From Bustle — Sign Up For The Newsletter
From hair trends to relationship advice, our daily newsletter has everything you need to sound like a person who’s on TikTok, even if you aren’t.