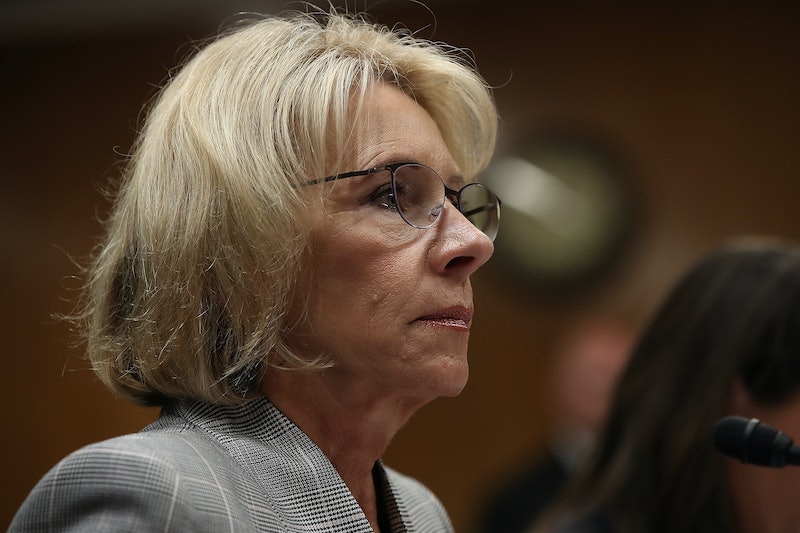 According to multiple reports, on Monday students silently protested Betsy DeVos' commencement speech at the University of Baltimore. The education secretary was greeted with boos when she first entered the auditorium, according to ThinkProgress. Photos and video from the speech showed around 50 students turning their backs in front of the stage, some with raised fists in the air, as DeVos gave her speech.

Within a week of the September announcement that DeVos would be the fall commencement speaker at the university, a petition opposing her selection had gathered nearly 3,000 signatures, according to the Washington Post. Keanuu Smith-Brown, vice president of the school's student government association, called DeVos "someone who is in direct contradiction to our values at the university," citing the secretary's controversial interpretation of Title IX statutes and perceived hostility toward public education. “We have to stand up to that, not back down to it," Smith-Brown said at the time.

A small group of protesters gathered outside the university before DeVos' speech, the Hill reports. Despite the protests, she called the university's graduating class "a source of inspiration" and "the reason we are working to rethink how our country approaches education," according to Fox News.

This wasn’t the first time university students protested a DeVos speech. In May, when Bethune-Cookman University awarded her an honorary degree, students booed DeVos as she took the stage and, like the University of Baltimore graduates, turned their backs as she was speaking. That episode was more contentious than the one that played out in Baltimore, however, as Bethune-Cookman’s president interrupted DeVos’ speech and threatened to mail the students’ diplomas to them if they continued protesting, which they did.

President Trump's decision to appoint DeVos to lead the Department of Education was controversial for a number of reasons, including to DeVos' support for school vouchers and the fact that her brother, Blackwater founder Erik Prince, was an advisor to Trump during the campaign. The Senate deadlocked on her nomination, but she was ultimately confirmed after Vice President Mike Pence cast the tie-breaking vote; this was the first time in U.S. history that the vice president has been required to confirm a cabinet secretary.

DeVos alluded to her support for voucher programs, which aim to increase private school enrollment, during her speech at the University of Baltimore.

"We must stop suggesting there is only one, conventional path to success,” she said, according to Fox News. “In fact, there are many avenues to gain what individual students need or want: industry-recognized certificates, stackable credits, credentials and licensures, badges, micro-degrees, apprenticeships, two-year degrees, four-year degrees, advanced degrees. All of these are valid pursuits."

Opponents of school vouchers argue that they drain money from public schools and, when used to send children to religious private schools, violate the separation of church and state by funneling public money to religious institutions.

In the anti-DeVos petition that circulated in May, students said that the Education Secretary "seems to go against the very core of so many of UB's values and makes our mission statement look to be a mockery," and that university president Kurt Schmoke's decision to invite her "creates an implicit endorsement of policies that can and will have a lasting negative impact on the very graduates this ceremony is supposed to celebrate."

"By signing this petition, we are putting the University of Baltimore on notice that no future or current alumni will donate any money to the university if they decide to keep this decision to bring her as the commencement speaker," the petition said.

According to ABC News, several faculty members protested DeVos' speech as well, though most declined to identify themselves to reporters.