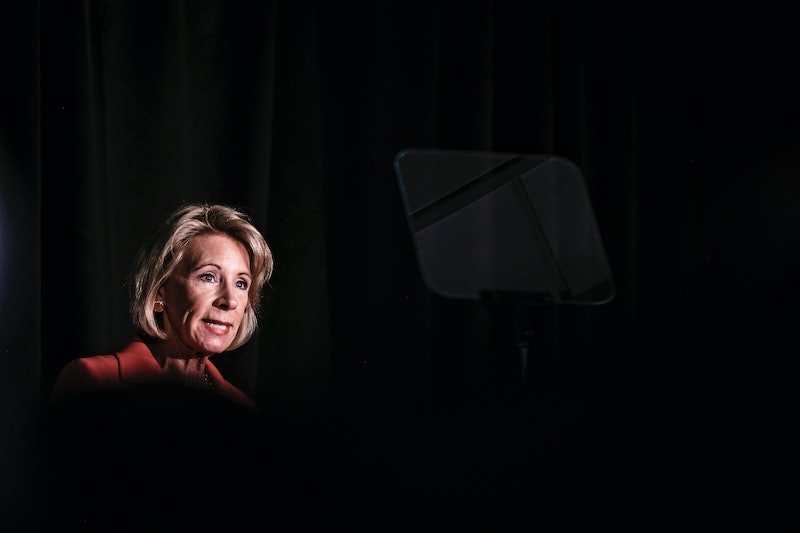 Education Secretary Betsy DeVos didn't hide her intentions to roll back the campus sexual assault guidelines issued by the Obama administration — in fact, she said as much in a speech two weeks before the Department handed down new orders. But now, survivors of campus sexual assault and universities tasked with evaluating them have no idea what comes next.

"I think that this guidance is going to discourage survivors from coming forward, it’s going to confuse schools, and at the end of the day, it’s going to make campuses less safe," Dana Bolger, a co-founder of the advocacy group Know Your IX tells Bustle.

Last week, the Department of Education rescinded a set of guidelines issued in 2011 that spelled out how colleges and universities must handle allegations of sexual assault between students, or risk losing federal funding under Title IX (the law that bars discrimination on the basis of sex). That 2011 "Dear Colleague" letter required schools to adjudicate cases based on a "preponderance of evidence" standard, meaning whether it is "more likely than not" the alleged assault occurred, given the evidence. It also recommended a 60-day limit for cases to be evaluated and allowed accusers to appeal not-guilty findings, while discouraging cross-examination of accusers.

"You can not say that a woman has a equal educational opportunity when one in four women in on college campuses experiences sexual assault."

Advocates say the Obama-era reforms made it easier for victims of sexual assault to come forward. Nationally, two-thirds of sexual assaults go unreported, according to the Rape, Abuse & Incest National Network. There's an even wider divide on college campuses: Only 20 percent of sexual assault victims go to the police, per a 2014 Justice Department report.

For many reasons, students are increasingly turning to school officials to handle allegations of sexual assault. While schools can't send a student found guilty of sexual assault to jail, they can expel them from campus. That's where Title IX comes into play: advocates for reform, including Obama-era Education Department officials, argue it is a school's responsibility under Title IX to sustain an environment in which all students, regardless of gender, are given an equal opportunity to learn. Since more than 90 percent of sexual assault victims are women, advocates argue the issue disproportionately affects female students.

The Burden of Proof

When Abby Honold was raped by another student at the University of Minnesota, she reported the crime to police.

"The police told me despite all my injuries, ‘Chicks are into kinky shit, and I can’t prove that you didn’t consent to that,'" Honold tells Bustle. That's despite a statement from the hospital nurse, whom Honold remembers describing the injuries to police as "the worst she’d ever seen in a rape."

Unlike a majority of sexual assault survivors, evidence of the assault was documented early on. "I was very privileged in a sense because my rape caused injuries that were readily identifiable, but a lot of victims don’t have that." Honold says. When police closed her case, Honold turned to her university. "My rapist is now in prison and part of that is because of Title IX," Honold says.

Holding universities responsible for handling sexual assault cases is hotly debated, and DeVos fueled the fire by focusing on the rights of the wrongly accused in meetings with men's rights groups this summer. Leaders of those groups told Bustle they feel emboldened by what they see as a leveling of the playing field. New guidance from the D.O.E. allows schools to evaluate cases by the "preponderance of evidence" standard or a looser "clear and convincing evidence" standard. (Both standards require a lower burden of proof than the "beyond a reasonable doubt" standard used in criminal cases.)

"My rapist is now in prison and part of that is because of Title IX."

"This interim guidance will help schools as they work to combat sexual misconduct and will treat all students fairly," DeVos said in a statement. "Schools must continue to confront these horrific crimes and behaviors head-on. There will be no more sweeping them under the rug. But the process also must be fair and impartial, giving everyone more confidence in its outcomes."

Congresswoman Annie Kuster of New Hampshire is the founder and co-chair of The Bipartisan Task Force to End Sexual Violence. She's been calling on DeVos to keep the Obama-era guidelines.

"There is a misperception in comparing legal standards," Kuster says. "It is true that when the state can take your liberty interest and put you in jail, that the American legal system in a legal case uses a higher burden of proof: 'beyond a reasonable doubt.' But that standard is not necessary, nor is it advisable, on a college campus that’s trying to create an environment of respect and learning."

What's Title IX Got To Do With It?

The Department of Education set no formal timeframe to issue permanent guidance and said it will do so after meeting with students and university leaders to discuss the issue. In the meantime, a few changes are clear: Besides flexibility in choosing which burden of proof a case must meet, the interim guidance tells schools they can offer the right to appeal to both parties or to only one party, leaving open the possibility that schools could allow only the accused student to appeal a decision. (The Obama-era guidance had ensured an accuser's right to appeal.) It also eliminated the 60-day timeframe for adjudicating cases.

"DeVos has some different priorities, which include tipping the scales in favor of perpetrators at the expense of campus safety."

“This represents a total turning back of the clock on this issue in some really horrible ways," Sofie Karasek, Director of Education and Co-Founder of End Rape on Campus tells Bustle. "What university are able to do then, is just drag [cases] out until the perpetrator graduates or the survivor graduates, so they won’t have to do anything to address the problem," Karasek says. "Clearly DeVos has some different priorities, which include tipping the scales in favor of perpetrators at the expense of campus safety." (Groups that expressed support for changing the policy in conversations with DeVos over the summer, including The National Coalition for Men, SAVE: Stop Abusive and Violent Environments, and Families Advocating for Campus Equality (FACE) did not respond to Bustle's requests for comment.)

"Federal funding is a carrot and a stick and can be operated in both ways, and that is real and important," Deutsch says. "It sort of removes the teeth from it."

Columbia University Junior Amelia Roskin-Frazee is a sexual assault survivor and an organizer with No Red Tape. She tells Bustle her school is still planning on holding to the "preponderance of evidence" standard, but that each school will make its own decision.

"Which is scary because may schools, when given the choice, don’t respond in a way that’s fair and impartial to survivors," Roskin-Frazee says. She tells Bustle she's been disheartened by DeVos's past statements.

"She kept bringing up stories of the parents of accused students, talking about how horrible those parents felt ... and she barely talked about the fact that sexual violence occurs and destroys the lives of survivors and as a survivor, I know this firsthand," Roskin-Frazee says. "So she really seemed to have selective hearing, which is not surprising at all considering the administration she’s working for, but still really unsettling."

Roskin-Frazee isn't alone in aligning President Donald Trump's past statements about women with DeVos' handling of campus sexual assault policies. A leaked tape revealing comments Trump had made in 2005 in which he bragged about grabbing women "by the pussy" threatened to derail his bid for the White House. Kuster, who was elected to Congress four years before Trump's own turn to power, says she sees a pattern coming from the highest office.

"I’m concerned that survivors of sexual assault aren't taken seriously and that this administration, from the very top, has a callous attitude and approach to sexual assault, sexual harassment in the workplace, and certainly keeping communities safer in college campuses and in the military. And I believe that comes from the top," Kuster says, alluding to Trump's proposed ban on transgender troops in the military.

To Know Your IX Co-Founder Dana Bolger, DeVos's insistence on drafting guidelines with input from falsely accused students — whom experts estimate are involved in two to 10 percent of all sexual assault allegations — calls to mind pattern of false equivalencies among Trump and his allies.

"Betsy DeVos and the Trump administration more broadly have taken fringe hate groups and made them central players," Bolger says. "That kind of validation is dangerous and it stems from the same kind of attitudes that allowed the president to say that there was violence on all sides in Charlottesville." Members of Trump's own party distanced themselves from the president after he equivocated over laying blame on white supremacists, who staged a rally in Charlottesville in August, saying there were some "very fine people" among the protesters and blaming "both sides," including counter-protesters who opposed the white supremacists, for violence.

"No matter what policy changes they may or may not make," Bolger says, "rape survivors everywhere are hearing one message loud and clear: that they matter less than the students that hurt them."