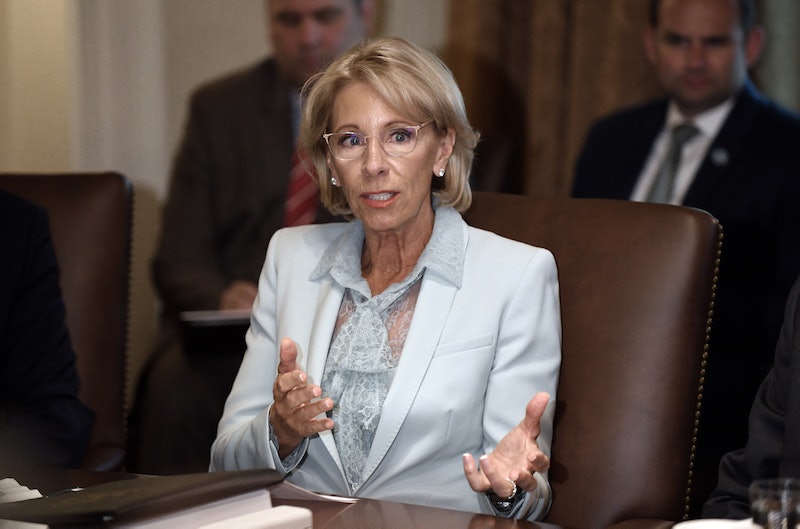 At an event honoring Constitution Day on Monday, the current education secretary spoke to students about the potentially harmful side effects of social media, but not all of what she had to say went over so well. Betsy DeVos' Twitter advice for students, in particular, resulted in a direct call-out from a member of the audience.

"It’s easy to be nasty hiding behind screens and Twitter handles. It’s not so easy when we’re face to face," DeVos said, according to video of the event shared by ABC. "When we are, we more quickly recognize that behind each strongly held idea are heart beats, emotions, experiences. In other words, a real person."

One college student, according to multiple reports, pushed back on DeVos' advice, pointing to the president.

"It just seems like our current president is the prime example of hiding behind Twitter handles," said 21 year-old Kaileigh Murphy, a senior majoring in education at the College of New Jersey, per the AP. "So I wanted to ask her, if she feels this way, why isn't it coming out in the other levels of our government?"

According to the AP, DeVos told Murphy that "the separation that occurs between someone who puts something out on social media without really considering the receiving end of that communication doesn't help with the overall discourse."

DeVos isn't the only person close to President Donald Trump to receive backlash for publicly decrying cyberbullying. Melania Trump has received similar pushback over the years. This was particularly true after she formally announced that she planned to devote part her tenure in the White House to teaching children the importance of utilizing compassion and respect when communicating online.

President Trump is known for going after people he disagrees with, or else flatly dislikes, on social media — and especially on Twitter. This was true before he was the president, and has remained true since the 2016 election. Whether it is North Korea or former FBI Director James Comey, Trump has exhibited a willingness to publicly spar with his opponents online.

With such a reputation existing right within the administration, it's not entirely unsurprising that DeVos would be called out for espousing an anti-cyberbullying message in front of the most online generation to date. But while Murphy, the student from DeVos' talk, did push back against the education secretary's messaging, she told the AP that she ultimately agreed with a lot of what DeVos was saying, particularly with regard to free speech and listening to other people's opinions.

For her part, DeVos also used her stage-time to riff on the idea of truth.

"The issue is that we’ve abandoned truth,” DeVos she told the audience. She continued:

Learning is nothing if not a pursuit of truth. Truth and the freedom to pursue it is for everyone, everywhere, regardless of where you were born, who your parents are, or your economic situation. Truth can be pursued, and it can be known. Yet students are often told there is no such thing.

While DeVos' remarks about the internet may not ultimately result in any sort of change when it comes to how members of the administration use their Twitter accounts, the pushback did suggest one thing: Younger generations are, in fact, paying attention.