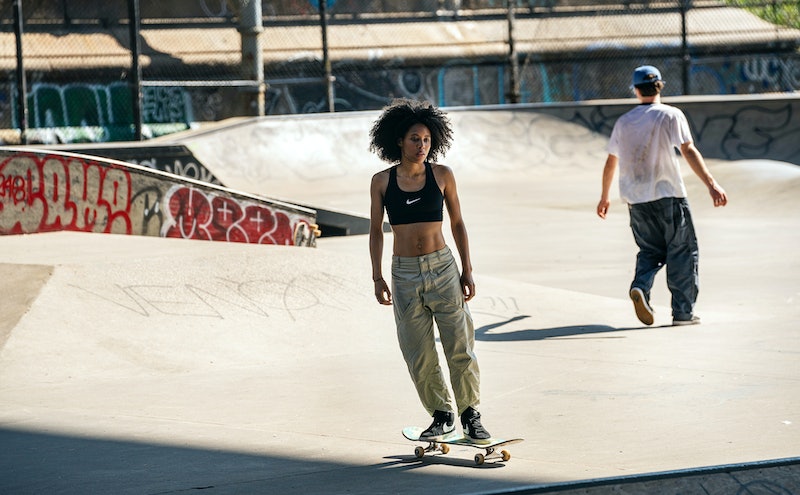 Although HBO's new series Betty is technically fictional, it follows a group of young women playing versions of themselves as skateboarders in New York City. They are not actors (or they weren't, rather, before co-creator Crystal Moselle started collaborating with them back in 2016), and as a result, are really that tight-knit in real life. In fact, Betty is based on a real collective called Skate Kitchen, which is also the name of Moselle's 2018 film about the group.

Member Rachelle Vinberg, who plays Camille in the HBO series, coined the term Skate Kitchen after looking at YouTube comments. "I'd always look at the comments of girl skating videos, and they'd all be saying, 'Why aren't they in the kitchen?'" she told Teen Vogue in 2018. The resulting name, Skate Kitchen, is a tongue-in-cheek way of saying they're right where they belong. "In the name, it shows we're allowed to skate," Vinberg explained.

As for the name Betty, Moselle explained in a clip for HBO that it's a derogatory term that's evolved from "a girl who skateboarded, and then it was a girl who hung out with skateboard dudes." Now, she says, they're "reclaiming the term and making it our own."

And if you've looked at any members' social media and wondered why there are bananas everywhere, it's because the fruit is their mascot, which Moselle told Teen Vogue happened organically. "I think that [the girls] just loved bananas, and then Rachelle drew it for the logo, and they just got obsessed with bananas," the Skate Kitchen director and Betty co-creator said. "Now, everything's f*cking bananas." Indeed, the Skate Kitchen logo has been memorialized as tattoos and graffiti and has even shown up on their skateboards and clothes.

The collective didn't form overnight, however. It started when Vinberg and Nina Moran (who plays Kirt) met by watching each other's skateboarding YouTube videos. "Even though I found Rachelle, I only skated with her every other week for one day when she'd come over," Moran told The Face. "So I started going to these girl sessions at a skate shop I ended up working at."

Eventually, she introduced Vinberg to the other girls she'd been skating with, one of whom was Moonbear. "It was really cool because I was like 17 and they were all like 24, 25, 27… So they'd teach me about life," Moran said. "They were also the ones that helped me feel comfortable in my sexuality because I wasn't open being gay when I was in high school and stuff. They were all queer, and it like made me feel comfortable."

Skate Kitchen isn't exclusively for girls, but their mission is to infiltrate the largely male world of skateboarding while being as inclusive to beginners as possible. "When you see someone that looks like you, you feel more comfortable to do something and less intimidated," Moonbear (who plays Honeybear in Betty) told The Face. "That's something the Skate Kitchen really works on."

Their inclusivity came about after being largely shut out of the sport they loved and wanted to learn as young girls (Vindberg told The Cut in 2018 that her older cousin taught her to ollie, and she learned other tricks from YouTube). Indeed, Ardelia "Dede" Lovelace told The Face that when she was growing up, it wasn't as culturally acceptable for girls to skateboard. "That's why Skate Kitchen came about, it was a support system," she said. "We just gravitated towards each other and that this is OK for us to skateboard — we have the right to be here as much as they do."

And through their collective, they've been to Tokyo, the UK, Paris, and Milan, among others, to skate with people they'd met online. "Skateboarding is very freeing. It allows you to connect with people who maybe don't even speak the same language," Ajani Russell (who plays Indigo) told The Face. "I remember when Skate Kitchen went to Japan, and we skated with all these Japanese skater girls that we met through Instagram. Even though we couldn't communicate with words, we were able to communicate through skating, and that was such a magical experience."

And the members have noticed a radical shift since Skate Kitchen first started. "I get on the train, and I see row after row of girl skateboarders," Russell said in the same Face interview. "And when I hear a skateboard and I look up, it's always like, two or three girls skating together."