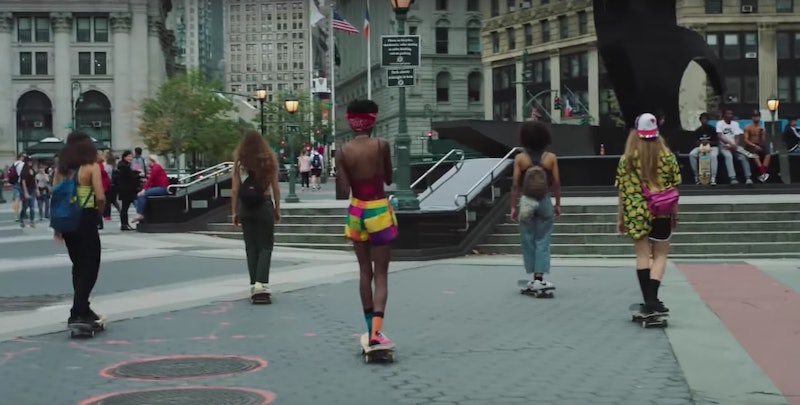 Without a board to ride, what is a skater? This question of need and identity lies at the heart of the new movie Skate Kitchen, a fictional coming-of-age story about teen skater girls based on the real-life skating collective Skate Kitchen. In the film, Long-Island-trapped teen Camille (played by real Skate Kitchen member Rachelle Vinberg) is banned from boarding by her mom after a bad fall, but stumbles across a bevy of skater girls on Instagram. She meets them in Manhattan to wheel around, and they make fast friends —but their tight-knit crew is tested when Camille starts rolling with an antagonistic dude crew (including a character played by Jaden Smith).

In real life, Skate Kitchen was formed around the same time the seeds for the film featuring them were planted, when director Crystal Moselle spotted Vinberg and her friend Nina Moran riding the G train. As explained in an interview with The Berrics, Moselle was fascinated by the girls and wanted to know if there were more young female skaters like them, in order to eventually showcase them in what would become a short for fashion group Miu Miu, That One Day.

InThe Berrics interview, Vinberg explained, "So Nina reached out to all of her other girl skater friends that lived in the city. I met them and we all started skating as a group, and we decided to call ourselves The Skate Kitchen." The name was a reaction to the sort of casual dismissal the girls encounter every day in the still mostly-male world of skateboarding. “Every time I’d see a video of a girl skating the comments would say ‘Oh, she should be in the kitchen’, so I’ve kind of been mocking them,” said Vinberg in a YouTube interview with neighbor and Fortune Skateboard founder Brett Conti.

Vinberg's quick to point out that Skate Kitchen isn't exclusively female, and it isn't about exclusion. In a group interview with Dazed she noted, "One thing I can’t emphasize enough, though, is that we don’t exclusively skate with girls. Boys are very much a part of The Skate Kitchen. Variation is the beauty of it... I hope The Skate Kitchen serves as an affirmation for people who aren’t sure if they can join the skate scene for whatever reason." Added Skate Kitchen member Ardelia Lovelace, "What I love about our group is that there is a mixture of races. Hispanic, white, black. And we want other girls to know they’re not alone and they deserve the confidence to skate just as much as anyone else."

That sort of all-inclusive, got-your-back attitude's present in the exclusive clip above, where Vinberg's friends take action to find her a board after her mom takes hers away. When they walk up to a contemptuous group of guys sitting at a table and ask to use their unused decks, the response is negative and rude, but when the girls return to their circle, their friend Charles already has a board waiting in hand. "I just want to see you keep shredding," he says to Camille, a perfect example of the proactive allyship Skate Kitchen's all about.

And anyone who checks out Skate Kitchen, out Aug. 10, will see the real deal in action. Speaking to The Berrics again, Vinberg pointed out that the movie is "like this hybrid sort of thing. We hang out with [director] Crystal all the time. She’s our friend. She took elements from stories that we would tell her from our lives and put them in the movie. So it’s all kind of jumbled together."

Skate Kitchen uses social media to promote their crew and projects, so you can find out what they're up to on Instagram, but if you want to dip into their world, the movie Skate Kitchen is an invitation to join the crew.