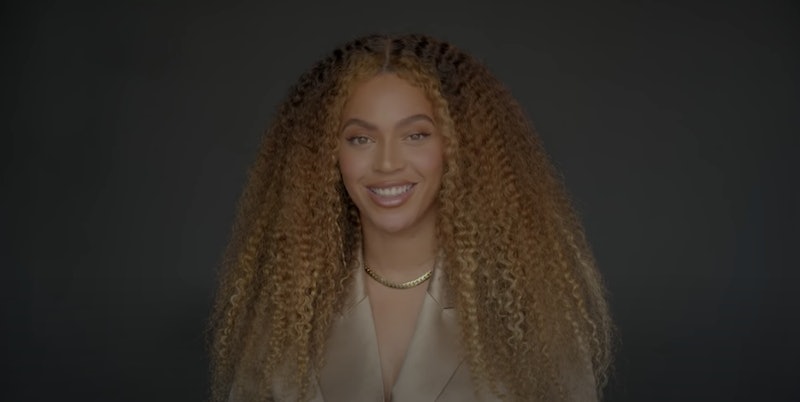 Between the coronavirus pandemic cancelling most senior proms and graduation festivities, and a racial pandemic that is inspiring many to protest police brutality, the Class of 2020 has had to deal with a lot this year. But at least they can say that President Obama, Lady Gaga, and Beyoncé spoke at their graduation thanks to YouTube. On Sunday, June 7, celebrities gathered to address graduates in YouTube's Dear Class of 2020 event, which included dazzling performances, celeb appearances, and inspiring speeches from some of the world's most important leaders.

The ceremony was filled with the perfect light-hearted moments to distract everyone from the chaos, including a Schitt's Creek reunion with special guest Mariah Carey (no, David/Dan Levy could not handle it), a story from Taylor Swift, and both a performance and an inspiring speech from BTS. But the most inspirational moments from the special came from those who grounded their commencement addresses by championing Black Lives Matter, with mentions of George Floyd, Ahmaud Arbery, and Breonna Taylor, among others, and police brutality.

Here are a few commencement speeches from the event that everyone should watch.

As one of the ceremony's commencement speakers, Beyoncé touched on many meaningful subjects, including the elevation of marginalized voices, her own struggles with sexism in the music industry, and of course, the importance of Black lives. “The killings of George Floyd, Ahmaud Arbery, Breonna Taylor, and so many others have left us all broken," she said, commending the Class of 2020 for using their "collective voice and letting the world know that Black lives matter.”

She went on to speak about her experience as a Black woman in music, saying that she worked hard to own her masters and operate her own businesses. "As a woman, I did not see enough female role models given the opportunity to what I knew I had to do," she said. "Not enough Black women had a seat at the table. So I had to go and chop down that wood and build my own table." She said that she hired "women, men outsiders, underdogs, and people that were overlooked" to work for her, and explained that all graduates can make their own space in the world.

"Your queerness is beautiful. Your blackness is beautiful," she said. "Your compassion, your understanding, your fight for people who may be different from you is beautiful. I hope you continue to go into the world and show them that you will never stop being yourself, that it's your time now."

Lady Gaga's commencement speech focused on how 2020 graduates can change the world through kindness. Explaining that she re-wrote her speech after the killing of Floyd, Gaga made an analogy between racism and nature because it is "as pervasive and as real as nature." She continued, "When I think about racism in America, I imagine a broad forest filled densely with tall trees; trees as old as this country itself. Trees that were planted with racist seeds."

She encouraged the Class of 2020 to plant new seeds that will slowly but surely start to dismantle systemic racism in America. "You are the seeds that will grow into a new and different forest that is far more beautiful and loving than the one we live in today," she said. Gaga concluded her speech by acknowledging that practicing kindness can be tough, but "people can do hard things."

The Obamas pulled double duty, addressing the Class of 2020 together at the start of the ceremony, and delivering their own, separate commencement speeches. President Obama highlighted the challenges that graduates have been through, including both COVID-19 and the tragic killings of Black people by police officers. “These shocks to the system that we’re seeing right now, just as you prepare to go out into the world, they remind us that we can’t take things for granted," he said. "We have to work to make things better.”

The former First Lady, meanwhile, used her speech to empathize with graduates who are having a hard time with everything. "If any of you are scared, or confused, or angry, or just plain overwhelmed by it all, if you feel like you're searching for a lifeline just to steady yourself, you are not alone," she said. But she also added that she trusted them to use this strength and knowledge to make meaningful change. "You're learning so much so quickly, and I know that not only can you do better than those who came before you, you will," she concluded.

Alicia Keys gave a nice, quick reminder during the ceremony that "it's okay to not be okay" in this turbulent time. "Right now, you're thinking about marching and protesting and making sure your voices are heart in a time where we cannot be silent, and I feel you so much," she said. "I promise to always be by your side, no matter where the fight for justice takes us next." That is, as long as you make time to honor yourself as well. "You're unstoppable," she concluded. "Let's celebrate you."

Other celebs, like Lizzo, decided to incorporate political statements into fun performances. The singer was joined by the NY Philharmonic and her flute Sasha to open the ceremony with a performance of the traditional “Pomp and Circumstance," complete with photos of graduates in masks and posing at Black Lives Matter protests. "Congratulations to the Class of 2020, but let's turn it up," she said, and that's exactly what she did.

More like this
Everything To Know About The 2023 Grammy Awards
By Jake Viswanath
Beyoncé & Blue Ivy Performed A "Brown Skin Girl" Duet At Her Private Dubai Concert
By Brad Witter
Cruz Beckham Teased New Music With An Adorable Nod To Mom Victoria Beckham
By Stephanie Topacio Long
"Lavender Haze" Star Laith Ashley Breaks Down Filming With Taylor Swift
By Jake Viswanath
Get Even More From Bustle — Sign Up For The Newsletter
From hair trends to relationship advice, our daily newsletter has everything you need to sound like a person who’s on TikTok, even if you aren’t.