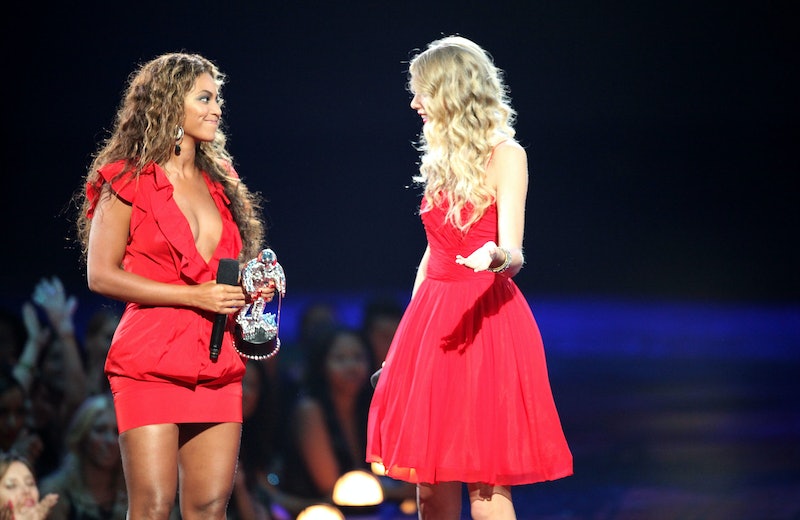 My friends, this year marks the 10-year anniversary of a monumentally dramatic moment in pop culture. It resulted in shock, awe, confusion, outrage, and apparently, some unexpected tears from one celebrity, in particular. According to a new oral history from Billboard, Beyoncé's reaction to Kanye West interrupting Taylor Swift at the 2009 MTV Video Music Awards was way more emotional than what viewers actually saw go down on-screen. Not only that, but her reaction apparently perpetuated yet another memorable moment from at the end of the show.

OK, so, you remember — or at least have heard about — the now infamous "Kanye Interrupts/Imma Let You Finish" debacle, right? Back in 2009, a whole slew of worthy women were nominated in the Best Female Video category. Among those artists were Beyoncé' (for "Single Ladies (Put A Ring On It)") and Taylor Swift (for "You Belong To Me"). Swift ended up winning the award, and then ... Well, and then Kanye West happened.

The unexpected on-air moment rendered Swift understandably speechless, and when the cameras panned to Beyoncé, she seemed pretty shook. What happened back stage, though, was another story — the scene West created actually caused Bey to cry.

Van Toffler, the former president of Viacom Media Networks Music & Logo Group, told Billboard that when he went back stage to try and diffuse the situation, "sure enough there is Beyoncé and her dad, and she is crying. She was like, 'I didn't know this was going to happen, I feel so bad for her.'"

Toffler then went on to explain how Bey's emotional back stage reaction gave him an idea — an idea for how to allow Swift to get the recognition she deserved in-full. "At some point I let [Beyoncé] know that she was probably going to be up on the podium at the end of the show for an award," he admitted. "And wouldn’t it be nice to have Taylor come up and have her moment then? I had to indicate to her that she needed to stay, and perhaps this is a way to have this come full circle and let [Taylor] have her moment."

So, yeah, Beyoncé knew ahead of time that she was going to win an award, and her handing the mic over to Swift during her own acceptance speech was pre-planned. It's not like she was forced to do it, but she did — and it ended up being a really lovely gesture that proves how kindhearted and generous Queen B truly is.

It's kind of fascinating to hear this kind of behind-the-scenes story all these years later. One very important question remains now, though: Will the 2019 VMAs bring anywhere near as much drama as the show did in 2009? Who knows, but it'll definitely be filled with plenty of surprises either way.