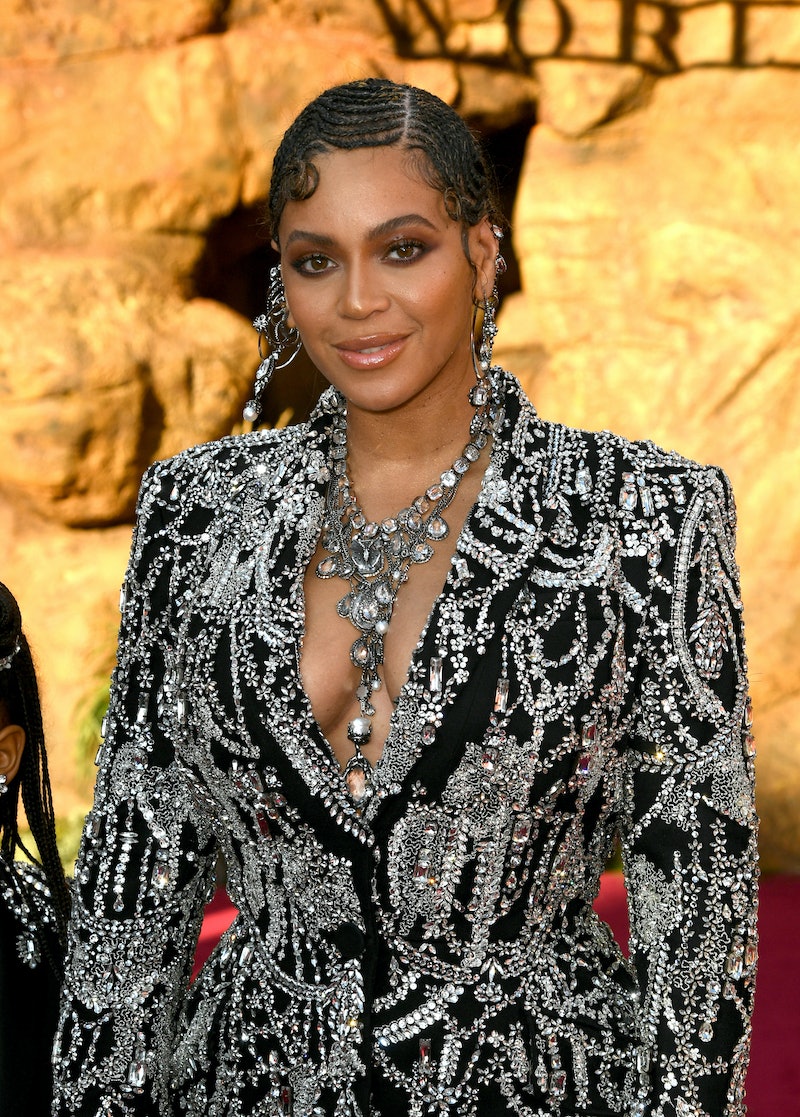 Among the most anticipated aspects of the new Lion King movie are the elements that Beyoncé is contributing. The artist is voicing adult Nala in the July 19 release and therefore dueting with her Simba, Donald Glover, on "Can You Feel the Love Tonight?" But if you get Queen B onboard your musical movie, you give her more than one song to sing, which explains why The Lion King features a brand new song by Beyoncé, which plays during a moving, triumphant scene. Minor spoilers ahead.

The song is called "Spirit," and is already streaming, along with the rest of the movie's official soundtrack. In the movie it's played when Simba decides to go back home after growing up with Timon (Billy Eichner) and Pumbaa (Seth Rogen). Nala has left the pride to go find help in dethroning Scar (Chiwetel Ejiofor), and comes across Simba. At first, he's reluctant to go back home after so long, but Nala convinces him that he's the rightful leader and that food has become scarce since Scar took over and let the hyenas hunt as much as they want, so he better come back or else he'll be a real jerk for now knowingly not helping his friends and family.

The lyrics of the "Spirit" reflect these themes of returning home and rising up to fight for what's right. The lyrics "Sayin' rise up/To the light in the sky, yeah/Watch the light lift your heart up/Burn your flame through the night," speak to Nala and Simba's trip back to the Pride Lands.

Beyoncé also sings, "While you're trembling, that's when the magic happens/And the stars gather by, by your side." Simba is nervous about going back to take on Scar, and as anyone who saw the original knows, in The Lion King stars are a big deal and represent Mufasa and other leaders who have come before. She also sings the lyrics "Your destiny is comin' close/ Stand up and fight" and "A boy becomes a man." Pretty clear what she's talking about there, but hey, this movie is meant for kids, too, so being very literal works.

Aside from Beyoncé's singing, the beginning of "Spirit" features Swahili lyrics that translate to "long live the king."

In addition to being in the film and part of its official soundtrack album, "Spirit" will be part of a companion album Beyoncé is releasing on Friday, July 19 called The Lion King: The Gift. In a statement Beyoncé explained, "This is sonic cinema. This is a new experience of storytelling. I wanted to do more than find a collection of songs that were inspired by the film. It is a mixture of genres and collaboration that isn't one sound. It is influenced by everything from R&B, pop, hip hop, and Afro Beat."

She continued, "Each song was written to reflect the film's storytelling that gives the listener a chance to imagine their own imagery, while listening to a new contemporary interpretation. It was important that the music was not only performed by the most interesting and talented artists but also produced by the best African producers. Authenticity and heart were important to me."

The album includes 14 tracks, most of which feature Beyoncé, but only four of which are solo songs. Other artists on the album include Jay-Z, Kendrick Lamar, Glover (aka Childish Gambino), and Pharrell, among many more. Beyoncé and Jay-Z's daughter Blue Ivy Carter is even featured on a song titled "Brown Skin Girl".