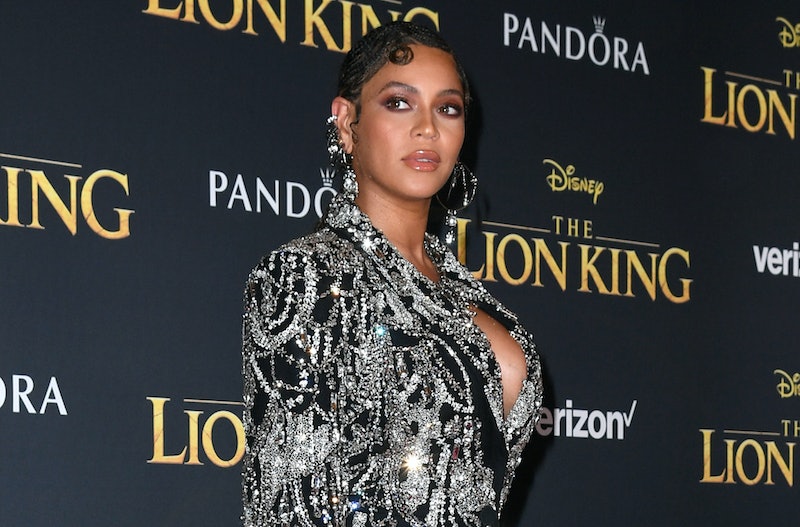 There is only one Queen Bey in this world. And Beyoncé's song "Spirit" from The Lion King soundtrack perfectly explains why. The new song, released late on Tuesday, July 9, the night of The Lion King premiere, transports listeners to the Pride Lands and dares them not to want to sing along. Before this release, Disney fans had only gotten a tiny taste of Beyoncé's vocals in The Lion King remake through a "Can You Feel the Love Tonight?" teaser. But "Spirit" introduces a new song to the story that's sure to become an instant classic — and it's only the beginning of Beyoncé's contributions to the legacy of this Disney film.

Nala didn't get a whole lot of opportunity to sing in the original 1994 The Lion King. But when Beyoncé was cast as the love interest of Donald Glover's adult Simba, fans knew that was going to have to change. And, while the incorporation of "Spirit" into the movie as a song by Nala hasn't been confirmed, the lyrics certainly fit the story. Specifically, Beyoncé's powerful vocals seem to match Nala's message to Simba, when she tells him he has to step up and reclaim his place as king. "Watch the heavens open/Spirit, can you hear it calling?," she sings.

In The Lion King, Nala motivates Simba to dethrone his evil uncle Scar and step into his rightful role of king. And on "Spirit," Beyoncé shows off her own incredible vocal register when she sings, "Your destiny is coming close/Stand up and fight/So go into that far off land/And be one with the great I am/A boy becomes a man."

Director Jon Favreau said in an interview with Fandango that the film "drew inspiration" from the Broadway show to make Nala's role larger in the 2019 adaptation. And Beyoncé's Nala singing "Spirit" would definitely accomplish that goal when The Lion King hits theaters on July 19.

Beyond this new song song, it was announced that Beyoncé will release an entire Lion King-inspired curated album, separate from the film's official soundtrack, called The Lion King: The Gift. "This is sonic cinema," Beyoncé said in a statement. "This is a new experience of storytelling. I wanted to do more than find a collection of songs that were inspired by the film. It is a mixture of genres and collaboration that isn't one sound. It is influenced by everything from R&B, pop, hip hop, and Afro Beat."

"Each song was written to reflect the film's storytelling that gives the listener a chance to imagine their own imagery, while listening to a new contemporary interpretation," Beyoncé added. "It was important that the music was not only performed by the most interesting and talented artists but also produced by the best African producers. Authenticity and heart were important to me."

The press release called The Gift "a love letter to Africa." Along with "Spirit," there will be additional new recordings by Beyoncé plus some "unexpected collaborations." During the red carpet premiere of The Lion King on July 9, Glover wouldn't confirm if he was involved in The Gift. But the Childish Gambino rapper certainly hinted that it was a possibility, so Nala and Simba could be reunited again on Beyoncé's companion album. Like the film's soundtrack and the movie itself, The Gift will be out on July 19.

In his Fandango interview, Favreau noted that the music superstar had "performed and wrote in the spirit of the production" when it came to "Spirit." And the soulful song certainly embodies the emotion of The Lion King as Simba finally comes into his own — while also highlighting that this Lion King wouldn't end up where he does if not for this Lion Queen.