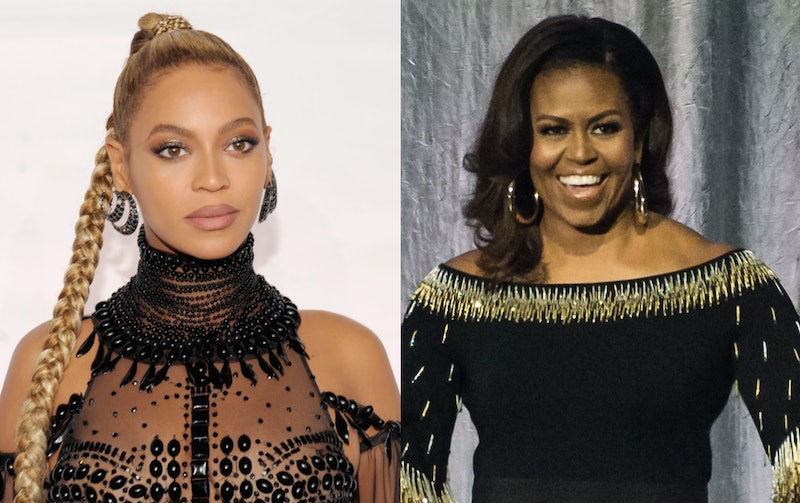 Beyoncé and Obama first met back in 2009, shortly before the latter's husband was inaugurated into the Oval Office. "When I first met her, I was embraced by a warm, regal, confident woman who possessed a reassuring calm," Beyoncé recounted for Time.

"The way she looked, walked and spoke, in that warm but authoritative tone, we saw our mothers and sisters," she added. "She was strong and ambitious and spoke her mind without sacrificing honesty or empathy. That takes a lot of courage and discipline."

It seems as if the Inauguration sparked a fast friendship between the two women; a fate which Beyoncé describes as an unquestionable matter of course. "Loving Michelle Obama wasn’t much of a choice," she wrote. "It was something that came naturally, because of how she carried herself. Because she resembled us and was moving in spaces where, as black Americans, we weren’t exactly meant to be, she seemed so powerful."

Throughout their decade of friendship, Beyoncé and Obama have continued to publicly sing each other's praises. In 2012, Queen B gushed (via Vanity Fair), "Every time I see [Obama], she inspires me, she empowers me, she encourages me to live a healthy lifestyle... I'm proud to have my daughter grow up in a world where she has people like you to look up to."

Then, in 2015, Obama shouted out Beyoncé in the *most* relatable way during an interview with the rapper Wale. When asked what she'd like to do if she could have any job other than her own, Obama responded, "I would be Beyoncé." Same. She then did a quick little "Single Ladies" dance move and added, "I got the hand up!"

In her write-up for Time, Beyoncé went on to explain why Obama has grown to become such an important figure — not only for her, but for people everywhere. She told the publication,

"She would’ve been impactful simply by being in the White House, the first African-American First Lady. But she also used her position of power to improve the world around her. Her initiative Reach Higher, for example, encourages young people to complete their education past high school. She empowers all of us to interrogate our fears and surpass greatness."

The singer closed her piece about her friend by adding that she's "honored to know such a brilliant black woman who’s spoken about the sacrifice it takes to balance her passions while remaining a supportive partner and mother." Not only that, but she also said that she's "so grateful that my daughters and my son live in a world where Michelle Obama shines as a beacon of hope who inspires all of us to do better and to be better."

Such a beautiful ode to a wonderful lady. Bow down to both queens, two paragons of strength, success, respect, and friendship.