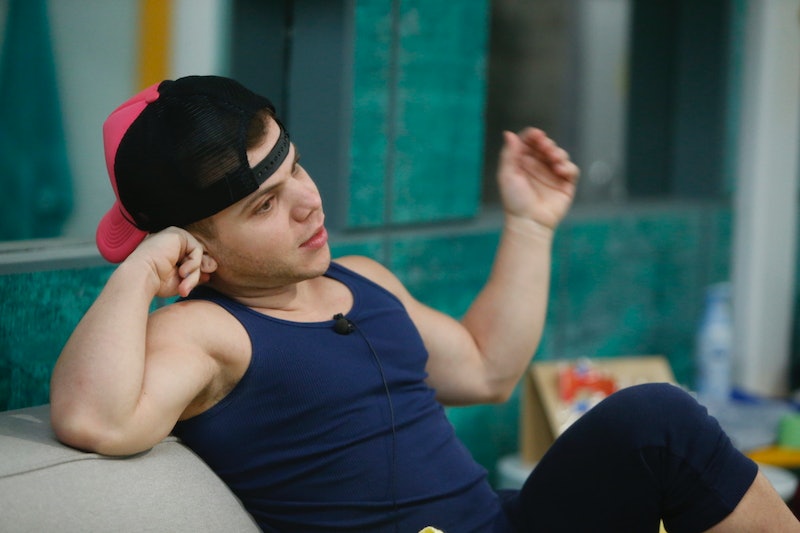 Big Brother is always watching, literally, thanks to the CBS show's 24-hour live feed. Over the weekend, that feed caught Big Brother 20 contestant JC Mounduix allegedly sexually harassing his housemates with an ice cream scooper, according to Us Weekly. This isn't the first time the 24-hour feed has caught Big Brother contestants engaging in questionable behavior, but some fans on Twitter are wondering how the show will respond to what appeared to happen in the live-streaming footage. Bustle has reached out to CBS for comment on the incident.

UPDATE: CBS responded to Bustle with this comment: "Big Brother is a reality show about watching a group of people who have no privacy 24/7 and capturing every unfiltered moment and conversation in their lives. At times, the houseguests reveal prejudices and exhibit behavior that we do not condone. The producers have addressed two such incidents that were seen recently on the 24/7 online feed. In both cases, those involved have been warned about their inappropriate behavior and offensive comments, as well as future consequences. These events will not be part of any future Big Brother broadcast on CBS."

EARLIER: In the footage, Mounduix seems to attempt to put an ice cream scooper on the private areas of two female contestants. He's heard telling housemate Kaycee Clark "to open up your vagina" because "it feels good." The housemates laugh as he tells them he knows because he's tried it on himself. Soon he's putting the scoop on his own genitals after attempting to put the scooper under another housemate, Kaitlyn Herman's blanket.

Mounduix was then caught on tape grabbing the genitals of male contestant Tyler Crispen, who was getting a massage. As Us Weekly pointed out, none of the Big Brother contestants appear to have complained about Mounduix's behavior publicly on the 24-hour feed. In fact, right before the ice cream scoop incident the housemates are heard talking about how funny he is and how he'll likely end up in movies or with "his own talk show" after appearing on Big Brother. But fans of the show have tweeted concerns over Mounduix's recent actions, which included him making sexual gestures with objects in the kitchen.

"So, we are going to have a season of JC violating houseguests during this controversial time in society and you are just going to condone his behavior?" Twitter user @Toasterpeach wrote, adding the hashtag #JChastogo. Another user @bailyjjones tweeted at Big Brother host Julie Chen, "This is #MeToo and #TimeIsUp stuff and you’re allowing sexually assault on live feed international TV. shame on you!!"

While others wanted to know if Mounduix had been reprimanded for his behavior. "Does anyone know if Big Brother has told JC to stop crossing boundaries?" @Andrewanthony91 tweeted.

User @rebecahsizemore also tweeted her concern about what was going on in the Big Brother house. "I don’t know if you’ve been watching the feeds but JC has been touching houseguests inappropriately and production isn’t doing anything," they wrote. "Weren’t there any rules on that? It’s disgusting to watch."

As user @Demlkafied pointed out though, there have been "mixed" reactions to Mounduix. Some have condemned his behavior while others think he's the comic relief, which might keep the show from taking action against Mounduix. Something that feels wrong to one fan.

"I don't think that excuses his inappropriate touching of the female HG's," Twitter user @Charlie_Bilder wrote of Mounduix's entertainment value. "If any other male HG was on video doing the same thing they would have already been booted."

This isn't the first time a contestant on Big Brother has been called out by fans for questionable behavior. In Season 19, contestant Jessica Graf made headlines for unwanted butt poking. Graf was seen poking her housemates without their consent, which some of her housemates said was sexual harassment. She said it was a prank and her behavior went unpunished. She was evicted on Day 51.

It's hard to believe Mounduix's actions won't be discussed on the next episode of Big Brother, which airs on Sunday, since his behavior has gone viral. Only time will tell, though, how the show will address the situation. Either way, it likely won't stop concerned fans from keeping a close eye on Mounduix and his behavior.