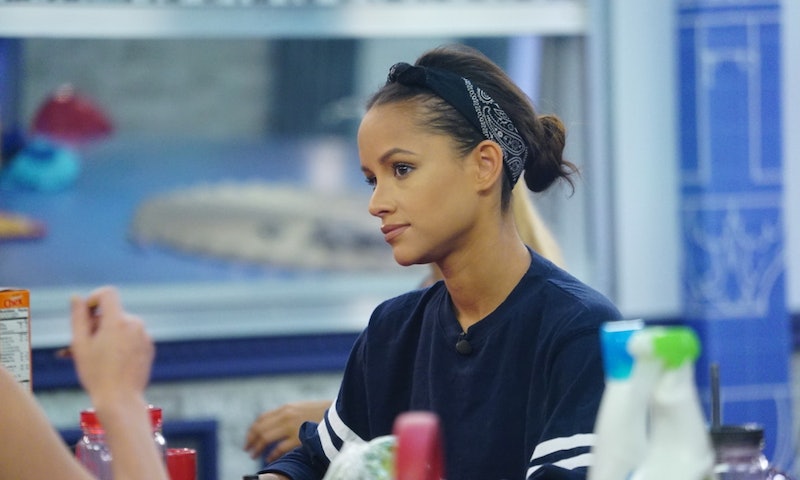 The Big Brother house has often been known as a haven for pranksters, but Jessica Graf's behavior on Big Brother has crossed the line with several housemates. According to live feed footage posted by TMZ, Jessica has been approaching houseguests including Paul, Matt, and Alex and poking them in inappropriate places as what she seems to think is a joke. She can be seen doing so to both Matt and Paul in the videos included in TMZ's article, but when Jason called her a "sexual predator," Jessica seemed to just laugh it off. (Bustle reached out to CBS for comment but did not receive an immediate response).

Later, Alex told Josh that Jessica actually makes her feel very uncomfortable, claiming that her cousin had been raped and murdered. The clip cuts off before she can elaborate, but Jessica's actions seem to be triggering for Alex. "The thing that bothers me so much about her is when she jams her fingers up people's butts and stuff, when she touches my vagina. I don't want her to do that," Alex said in the footage. Josh concurred: "It's disgusting."

In another video posted by TMZ, Paul and Kevin also discussed their discomfort. "It's sexual harassment, you know," Kevin said. Paul then explained that's he's made clear he wants Jessica to stop. "Dude, she has put her finger in my a** so many times, and I've turned around and said, 'Yo, don't f*cking do that. I don't like it. It's not funny. Don't do it.' And she just laughs it off," he said.

And in yet another clip, this one posted to YouTube, Alex and Paul appear visibly angry. "I don't know her, I didn't ask her to do it, and it's on camera," Alex said, while Paul reiterated that he's expressed to Jessica multiple times that he doesn't like it.

Putting aside the fact that such behavior seems invasive in the first place, the mere fact that her housemates claim to have told her — on more than one occasion, no less — that they want her to stop should be reason enough for Jessica to do so. Regardless of whether or not she finds it funny or if at one point, to her, they seemed OK with it, Jessica should respect both her housemates' requests and their personal space. Not only are they not giving consent, they claim they've explicitly told her not to touch them, and ignoring that is at best disrespectful and at worst an outright violation. As of now, it's unclear if her behavior will be addressed and if so, how, but for the sake of the housemates, hopefully she'll stop sooner rather than later.