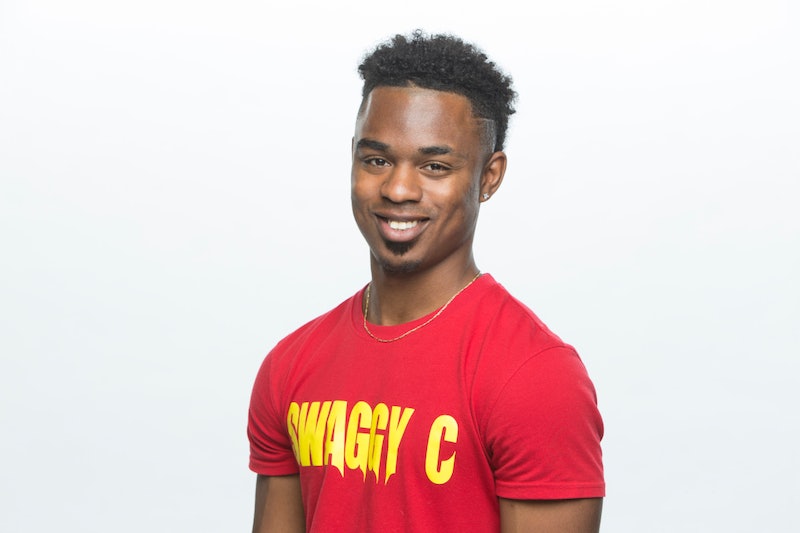 At least two houseguests got off to a rocky start with each other in Wednesday's Season 20 premiere of Big Brother. The contestants began their competition in a computer-themed, pseudo-cyber set, and while it was a fairly tame season premiere overall, a few noteworthy interactions might have set the stage for what's to come. Sam, for example, got turned into a robot, and Kaycee has to wear "the pinwheel of doom" until the live eviction. Another houseguest who's setting himself apart from the pack? Chris Williams, aka Swaggy C. After some heated competition, it seems there could be a rivalry between Swaggy C and Angela on Big Brother, and it will be interesting to see where the game goes from here.

Even Chris' nickname, Swaggy C, makes a statement. Not only does he have the name printed on seemingly all of his shirts, but he also refers to himself in the third person as such. The 23-year-old day trader and basketball player also thinks out loud, talking to himself in an empty room in the premiere (though perhaps that was a note from the producers). He refers to himself at one point as a puppet master. Twitter was not sold on Swaggy C's nickname or unapologetic personality, which fellow houseguest Bayleigh suggested he might want to tone down.

His larger-than-life persona could work in Swaggy's favor. After all, people like to talk a big game on Big Brother — especially in the first few episodes. They form alliances — often prematurely — and make snap judgments about people. This happened after the first challenge of the season, in which the house of 16 was split into two groups. Half of the contestants then flailed around in a dark, sludgy room for "Escape" folders. Angela, the fitness model and former pole vaulter, won that challenge.

Sounds fine so far, right? Not so fast, because Swaggy won his group's competition, which was part Jenga and part Scrabble, and involved stacking large letters to spell the word "Houseguest" while suspended in a harness. As the two winners, he and Angela then had to face off by "web surfing" on moving surfboards, but not before Angela told Swaggy C that if she won — which would give her the ability to keep eight houseguests safe — she was protecting the half of the house that played the Escape folder challenge with her. Swaggy, who was not in that group, was obviously upset to be told Angela wouldn't keep him safe, and it was clear that something was about to go down.

Telling Swaggy her plan wasn't a good move on Angela's part, and when her opponent came out on top, he was the one who got to choose eight people to keep safe from elimination. However, as always, there was a twist. Swaggy C had to choose people in groups of four: the groups the houseguests were sorted into when they moved in to the Big Brother house. Naturally, he chose his own group, which consisted of Swaggy, Brett, Rachel, and Angie, aka Rockstar. But as for the second group, instead of choosing Angela's foursome, he went with the other four people he stood outside the house with: Scottie, Kaycee, Haleigh, and Faysal.

It was a bold move and one that shocked many houseguests. “He just got so much blood on his hands,” Kaitlyn whispered to a few other contestants as the credits rolled. And the life coach is right: Swaggy just made a ton of enemies. While it's understandable that he wouldn't save Angela, since she literally said she wasn't going to save him, Swaggy also alienated Bayleigh. The flight attendant from Missouri was real enough to call him out on his cockiness earlier in the episode, and it seemed like they had a genuine connection. But he didn't save her group, and as the former Miss Missouri said, "Princess needs her safety."

So where will this leave the contestants for the upcoming live eviction? Sam's robotic body is going to hinder her social strategy, and she is in danger of elimination. As for the future, perhaps the alliances Swaggy made with his group will keep him afloat, but houseguests like Angela and perhaps even Bayleigh may distance themselves from him in the coming weeks.