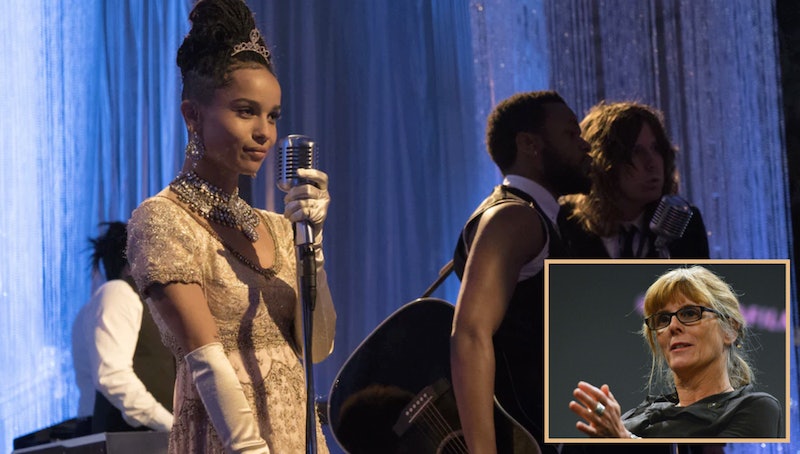 Picture the following scenes: Emerald waves crashing on the Big Sur coastline. Cars driving over the dramatic archway of the Bixby Bridge. Well-coiffed suburban women shuttling their kids to school in their luxury cars with leather interiors. For any fan of HBO's Big Little Lies, it's likely nearly impossible to conjure up these images without suddenly humming the opening "oohs" to Michael Kiwanuka's "Cold Little Heart," which plays during the now-iconic opening credits of the HBO show.

That visceral reaction to an on-screen musical moment is a testament to the power of music supervisor Susan Jacobs’ work. In the four decades she's spent adding new dimensions to scenes in movies and television through music, Jacobs’ projects have been as omnivorous as her musical taste. She brought a classic rock edge to Oscar-nominated movies like American Hustle and I, Tonya, gave new artists like Kiwanuka and Sylvan Esso big breaks in HBO miniseries Big Little Lies and Sharp Objects, and hired composers for true-crime series like The Jinx and Wormwood to ensure that scenes would sound as ominous and dramatic as the topics they covered.

It's a role that involves much more than simply choosing a song and deciding it should soundtrack an important moment in a movie or TV show. As a music supervisor, Jacobs says, your primary job is to be the aural conduit for the director — which means doing everything from choosing songs, to clearing the rights for them, to hiring a composer if there will be a score. Jacobs often refers to music supervision as a spatial skill, because it's not only about having the taste to select a certain song, but about knowing if and how that song will fit within the emotional beats of a particular scene.

"This isn’t about your pace or your music," Jacobs tells Bustle. "You’re serving a film and the director’s vision of a film, and those needs can be quite different than what you even like." Ultimately, she says, music is a point of view, and the job is about understanding how what the audience hears factors into the project's larger perspective.

Of course, there's still plenty of fun to be had along the way. Being a music supervisor is all about taking a moment on screen and magnifying the characters' emotions through music. And Jacobs has done this memorably plenty of times, whether she's soundtracking Bradley Cooper's runs wearing a garbage bag in Silver Linings Playbook or giving voice to the inner rebellion of Sharp Objects' Camille Preaker through the songs of Led Zeppelin.

With a good musical cue, "suddenly you have a whole new narrative just from the music that's put on," Jacobs says. "It can add tension, it can add romance, it can be suspenseful, it can do whatever you want."

But finding the perfect song is only half the battle. Jacobs is also often involved in clearing the rights with the artists, which isn't always easy — especially when that artist is Led Zeppelin. In the case of Sharp Objects, Jacobs jokingly describes director Jean-Marc Vallée's personal insistence on having Amy Adams' character Camille be a Led Zeppelin fan who finds release in the band's heavier moments as a music supervisor's "biggest nightmare." Jacobs says pitching the band's team on the show to secure the use of their songs was a five-month-long process that ultimately culminated in Sharp Objects gaining the rights to four Zeppelin songs — an accomplishment Jacobs says was unprecedented. "It's so much facilitating," she says. "It's such a thrill."

Her negotiation skills were put to similar use when she took over music supervising duties on I, Tonya late in production to help secure rights that had otherwise proven difficult to attain. One song in particular, Dire Straits' "Romeo and Juliet," was especially important to director Craig Gillespie to include in the movie — he wanted it to soundtrack a montage of Tonya Harding and Jeff Gillooly's tumultuous relationship — but Jacobs says frontman Mark Knopfler had said no "about 17 times." But she was persistent, sending his team scenes from the film to show exactly the manner in which the song would be used. Eventually, Knopfler relented and agreed.

"He wrote me a letter and he was really kind. He was like, 'I never would have known what a great movie that was, so thank you for coming back and pushing,'" Jacobs remembers. It was an experience that encapsulates how Jacobs approaches the artists she's determined to feature. "You want to be able to give an artist an opportunity," she says, and whether they're a known entity or not, perhaps they need to be convinced that a scene is the perfect moment for their work to shine.

Just as Jacobs surprised Knopfler by convincing him that his song would do justice to the complicated love story of an infamous ice skater, she also looks to give directors something unexpected with her musical choices.

"I love when you can surprise the director, when they walk in the room and they go, 'Oh wow! I never thought of a scene like that,' or 'I never thought I would do that there,'" she says, the glee apparent in her voice through the phone. But music is about provoking an emotion, and she's equally intrigued when a director or editor dislikes her choice. In one recent case, she says, the most rewarding part was how she changed someone's mind.

"The editor was like, 'Gosh, I hated that song and now I couldn't imagine living without it.' I love that," Jacobs says excitedly. "Because that just means that you’ve taken someone out of their comfort zone." They might hate a song at first, but then, through power of the music and the conviction of Susan Jacobs, "it becomes something that they were fighting to keep."