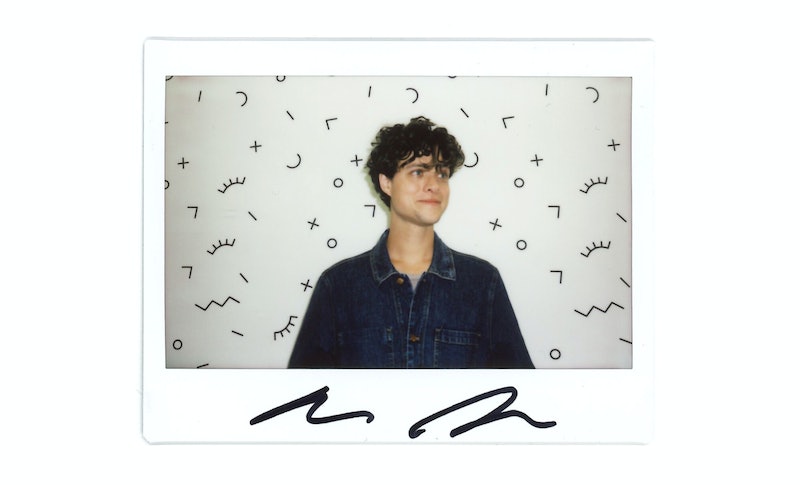 When celebrities hang out with Bustle editors, we want to give them the chance to leave their mark. Literally. So we hand them a pen, a piece of paper, a few questions, and ask them to get creative. The rest is up to them. This time, Big Little Lies star Douglas Smith is leaving his mark in the Bustle Booth.

Meeting Douglas Smith is, in some ways, a lot like meeting his Big Little Lies character Corey Brockfield. He's far less socially awkward, but just as animated and unfiltered. In the roughly 20 minutes we spend together, he prattles on about how sad he is that Game of Thrones has ended, excitedly pulls up his Instagram to play me the piano cover he recorded of Big Little Lies' theme song, and picks up, then puts down, then picks back up his cup of cold brew roughly a dozen times. He is a restless, endearing ball of energy with the kind of sustained gaze that makes you feel at once at ease and uncomfortable. He's also the first to acknowledge how "scarily similar" he is to Corey, a co-worker of Jane's (Shailene Woodley) and speculated new love interest who Smith describes as a laid-back guy without "an edit button."

"His story is that he was diagnosed with a million different things when he was a kid ... and then he went through his own mindfulness exploration and found a lot of peace with the ocean creatures and decided that was his passion," Smith says. "He just sort of marches to his own beat, as opposed to some of the other people that we see in the town of Monterey. They're these really successful and aggressively male dudes driving Teslas and conquering the world ... [Corey is] less ambitious, a little more zen."

Those are the qualities that made Smith gravitate toward Corey in the first place: he says growing up with a single mother enabled him to always be open with his emotions, and he brought that same sense of vulnerability to the role. "I wasn't raised with the archetypal, must-be-a-strong-hard-man idea," he explains. "I think that would be a bit different if I had a stoic marble man as a father."

As for Corey and Jane, Smith is sworn to secrecy about the exact nature of their relationship and how it develops, but teases that his character "raises a lot of questions" for Jane since she has both a complicated past and a young child she must introduce to a new, strange man. Most significantly for Smith, though, playing Corey helped to change his own perspective about how to respond to others' trauma.

"When someone shares something with you, [it's not about saying] the right thing, [but] just listening and being there and not trying to do anything more than that," he reflects. "Sometimes we feel obligated to help a person get over something. But maybe some things are too big to get over. Maybe just being there is enough."

After a tumultuous first season in Monterey, Jane could use someone who allows her to simply be.

Check out Smith's answers to our Bustle Booth questionnaire below.